Government leaders and advocates came together during the Annual Meetings to discuss a major development goal – ensuring everyone has access to affordable financial services such as a bank or mobile money account. While a lot of progress has been made on “financial inclusion,” new rules affecting the flow of funds threatens to slow or even reverse some gains.

Some 700 million people were brought into the formal financial system between 2011 and 2014 – a major success – but 2 billion people remain cut off, said Queen Máxima, who is the United Nations Secretary-General’s special advocate for inclusive finance for development.

A new challenge to financial inclusion is a trend toward “de-risking” by banks. Many larger banks are increasingly terminating or restricting business relationships with remittance companies and smaller local banks in certain regions of the world. De-risking has therefore made money transfers more difficult for migrant workers and humanitarian organizations working in war-torn places.

Although some banks may be terminating business relationships for bottom-line profitability reasons, other banks may be concerned about complying with regulations related to anti-money laundering/combatting financing of terrorism risks – known as AML/CFT.

Lew said financial institutions around the world have to adhere to high standards to stop the flow of illicit funds. However, “if the burden is so high that people withdraw from the financial system or are excluded from it, the risks of illicit transactions rises,” he said.

Vega-Serrano said de-risking is a complex problem and it’s unfortunate international standards have been interpreted in a way that has led to the withdrawal of financial services. However, fighting corruption can be fully compatible with bringing more people into the financial system, he said. 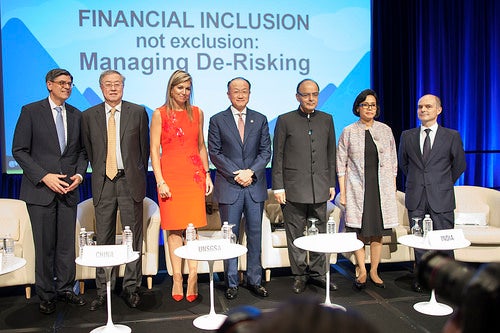 De-risking has been a source of great stress in developing countries because of its impact on remittances from people working abroad, said Kim. Remittances amount to about $450 billion a year and are a major source of income for many developing countries. The key will be to find a way to “mitigate the risks without slowing down financial inclusion,” Kim said.

The Bank Group has committed to help financial service providers and governments reach 1 billion adults with transaction accounts by 2020. Already, some 640 million people have been reached, said Kim.

In India, rapid progress on financial inclusion occurred after the country established a digital identification system covering 1 billion people, said Jaitley. He said the system helped identify who was entitled to benefits through the national insurance program and who was not – generating “huge savings” now being used to assist the bottom 20 percent of Indian society. The next step was connecting some 240 million people to the banking system so they could receive digital payments through the national insurance system.

Sri Mulyani Indrawati, the finance minister of Indonesia, said Indonesia is seeking “quick wins” on financial inclusion by moving to digital payments to 15.3 million poor families who today receive cash transfers.  Indonesia also plans to increase the number of people using bank accounts to tap credit – critical to support entrepreneurship and the growth of small and medium businesses.  “For Indonesia, it’s quite unique. Female using account in the bank is higher than the male,” said Indrawati. “You can give applause for that.”

The role of DFIs in fostering Financial Inclusion cannot be over-emphasized.
Financial Inclusion Services providers like the MADAMIDOLA Nigeria Enterprises, in Osogbo, Nigeria is able and willing to utilize the resources at its disposal to assist the World Bank in its bid to end poverty and promote prosperity, if approached.