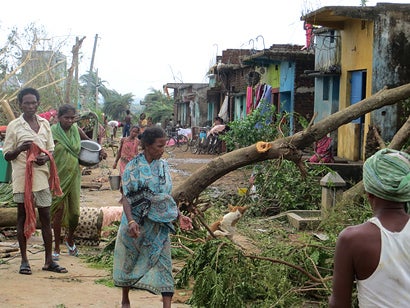 When Cyclone Phailin struck the Indian states of Odisha and Andhra Pradesh last week, the predictions were dire. In 1999, a cyclone of comparable strength took 10,000 lives.

While Phailin affected up to 8 million people, leaving approximately 600,00 homeless, death tolls are currently estimated to be in the low double digits. What made all the difference between 1999 and today? A much improved early warning system, effective evacuations, and the construction of shelters probably played a crucial role. Credible forecasts and early warnings were available for several days before landfall, and close to one million people were evacuated.

Everyone who still thinks disasters are ‘natural’ should stop and consider this for a minute. This difference in impact is a real world example of an analogy discussed at the 5th Resilience Dialogue on Oct. 11, 2013.  Here’s my interpretation:

Remember that old magic trick where a tablecloth is pulled off a fully set table but (almost) nothing falls over?

Now imagine this: Development is like setting the table. Cutlery and crockery are the cities we build at unprecedented speed, to ever larger, more complex systems. Arranging the plates is building the infrastructure we need for these systems to function. Every glass a school; filling the glasses the education for future generations.

But every now and then, someone pulls at the tablecloth. Some glasses tumble, some schools fall down, a plate breaks, people die. These tugs at the tablecloth are the hazards nature throws at us – the earthquakes, storms or droughts we face. The toppling of the crockery and cutlery are the disasters that can significantly set back fragile development progress in mere minutes.

Sometimes though the tablecloth comes out clean – the glasses sway, but don’t fall; the plates wobble, but don’t break. That is resilience. When nature shakes the fabric of our communities and cities but it doesn’t lead to a disaster. Things may break, but we are ready to cope and can bounce back.

Going forward, we will see more and stronger pulls at the fabric of development. At the same time we are loading the table ever higher – plates and glasses piling up; people and assets ever more concentrated. And when we don’t consider the risk of the tablecloth being pulled from under our feet as we arrange our assets, they will become increasingly vulnerable. This is the increased exposure and vulnerability resulting from development that does not integrate risk considerations from the beginning. Successful development needs to manage the risks we face. This is also the key message of the just released 2014 World Development Report on Risk and Opportunity, which considers natural hazards as one risk among many.

We can never stop nature tugging at the tablecloth – we cannot avert the next earthquake or cyclone. But we can prevent catastrophe – we can arrange the crockery and cutlery so it doesn’t fall. That is a challenge for all of us.

As for the actual tablecloth trick? Newton’s first law of motion and inertia.