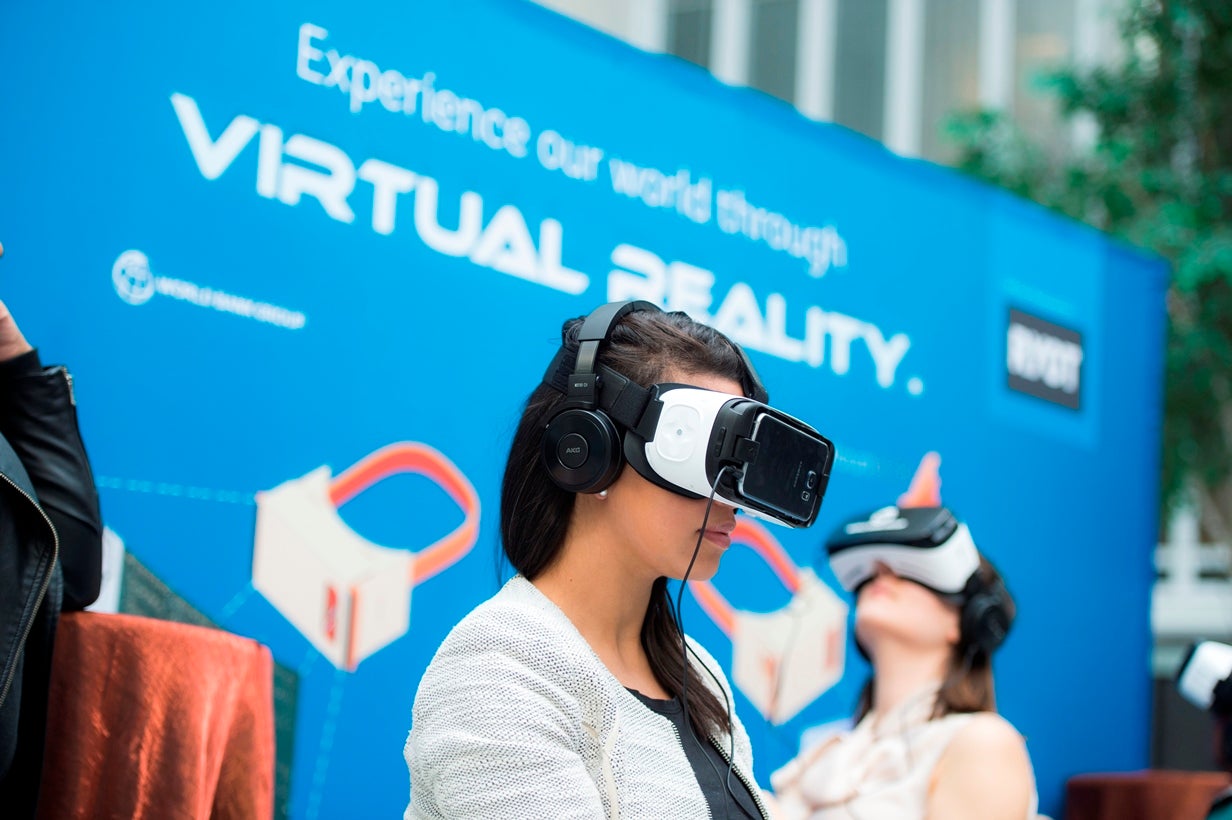 There is a round metal tray surrounded by four children and their parents. In it, there are plates filled with instant noodles, hummus, lebne, olives and pickled eggplant. I look left and there is a silver tea pot. I look right and my eyes catch a plastic bag of pita bread.

The tray is put on an unfinished concrete floor covered with a bunch of heavy winter blankets. The brick walls are partially covered with bedding sheets, while heavy winter clothes are hanging on a water pipe.

I lift my head up. I see a light bulb hanging from an unfinished cement ceiling. When I look back down, I see a toddler approaching me trying to poke my eyes, until I realize that I am not actually there and she is only trying to poke the 360 camera!

I pulled the headphones off my ears and unfastened the headset from my face. I had been immersed in another ‘reality,’ a virtual one. It was of Syrian refugees Ammouna and Fayad Selloum and their four young children in their makeshift home in Beirut, Lebanon. I ‘visited’ them through a virtual reality film produced by the World Bank to highlight the plight of Syrian refugees and their host communities.

Many people think that virtual reality will isolate us from the reality we live in, but I beg to differ. Virtual reality brings us closer to the human condition. It helps us understand and relate to each other in ways we never imagined before. Consequently, it allows us to extend our hands and help!

This, of course, is why development organizations, such as the World Bank, are now producing films in VR/360 format. The significance of these films is their eerie ability to trigger empathy in viewers.

‘The Holy Grail of VR’

“Ending poverty is a complex, difficult endeavor that requires multiple disciplines and the concerted efforts of people throughout the world,” said Peter von Elling, filmmaker and motion graphics artist at the World Bank. “VR/360 cinema is another way of showcasing those efforts and the profound effect they can have on the lives of those in poverty.”

The holy grail of VR, he added, is to make the audience believe they are truly in the world of whichever story is being told. So instead of being a voyeur or god-like observer, he said, you feel that you are right in the middle of the action.

“It’s the difference between seeing a picture of a beautiful place and actually visiting it.”

“Imagine watching a video on Education in a village in Africa from your computer screen, great right?” says Andy Berghauser, a World Bank customer service representative with the Printing and Multimedia team. “Now imagine how incredibly powerful it would be to be inside the classroom of said village and surrounded by a group of villagers giving thanks or describing how the project helped their lives.”

“It develops and creates a more personal and emphatic connection with the subject matter,” said Berghauser.

But there are still challenges facing the newly-adopted technology. Thinking non-linearly is one of the biggest challenges in building a story with different possible conclusions.

“If you give the audience the ability to look everywhere, it’s a challenge to get them to look at the right place to move the story forward,” said the Bank’s von Elling. “When they get distracted, they miss critical story points.”

That, among other challenges like the fact that the technology is not yet available to everyone, has led the Bank to focus on creating “experiences” and not full stories, he added.

In recent big events at the World Bank, these “experiences” were available to the attendees and Bank staff at a virtual reality booth Berghauser’s team helped set up.

“The idea really originated as a necessity to create an activation, or ‘hotspot’, to showcase the World Bank’s VR Experience. We wanted to create a congregational atmosphere to engage a truly unique experience as well as to educate and inspire interest in VR technology,” Berghauser said.

VR, he added, is one of the necessary tools to level the playing field between developing and developed countries.
The World Bank’s VR films can be viewed on our YouTube site at youtube.com/worldbank/360films/. With the YouTube or Google Cardboard app, you can view our “experiences” on smartphones. You can also watch them on our YouTube channel if you are using the Chrome browser. They can also be accessed via the Bank’s VR campaigns on YouVisit.com.
Topics
Fragility Conflict and Violence
Agriculture and Food
Digital Development
Poverty
Countries
Lebanon
Syrian Arab Republic
Regions
Middle East and North Africa

Tha development is realy taking when the peoples are co-oprate with the Govt: and the Nation. The Syrian war is destroyed three fourth of the country as the President is still a little part of the country. Rebells cught three fourth of the country and the destroyed the country,First of all Azad should resign and stand for re-election in the country. The peoples are become refugee in the nighbouring countries and spreaded to Europe and other surrounding countries. Rfugees are a big quiston to the nations took by nibhouring countries. As far as the Civil war is countinuing in the Syria the nibhouring countriees are a big alert for their own people. But there is chances of Militencey will spread by the rebels is threat to the neibhouring countries also. Syrian crisis is big qustion to the peace loving countries is a threat to them. Hope the crises will end as soon as the world leaders are taking note to end the war in the Middle east.