Sexual harassment is robbing far too many girls of the chance to get a school education, which can be a lifeline to ending economic and social poverty. This was a key issue highlighted at a recent high-level Regional Workshop in Burkina Faso. The event focused on findings of the World Bank Group’s Women, Business and the Law report, specifically those relating to laws affecting women's entrepreneurship and employment in West and Central Africa. It brought together Ministers of Gender and policy makers, civil society organizations, and the private sector. One of the issues raised was how sexual harassment in schools and universities affects girls’ economic opportunities. “At the university, some professors ask students for sexual favors in exchange for good grades,” said a female participant attending the workshop. Burkinabe students are not the only ones facing with sexual harassment. A Zimbabwean female student came face to face with this issue; not once but twice, first from her university administrator and later from a professor offering to help pay her university fees.  School-related gender-based violence is an issue that affects girls worldwide. Globally, it is estimated that 246 million girls and boys are harassed and abused in and around school every year.

The Sustainable Development Goals include ensuring quality education and the creation of non-violent learning environments for all (Goal 4) and the elimination of all forms of violence and discrimination against women (Goal 5). Some countries have already taken steps towards the achievement of both goals. Mexico City put in place a protocol to prevent sexual harassment and abuse in schools. And the High Court of Kenya established that all acts of sexual and gender based violence are a violation of the constitutional right to education.

Countries can fight this issue by adopting laws to tackle sexual harassment in education. Unfortunately, the track record so far is poor, as Women, Business and the Law data shows. Of 173 economies monitored by the report, only 30% have such laws in place. Even amongst OECD high-income economies, just over half have laws to address sexual harassment in school. Comprehensive and effective laws should not only punish the perpetrators, but also offer redress to the victims. For example, in 1998, Sri Lanka adopted Act No. 20, which not only prohibits and punishes sexual harassment in education with imprisonment, but also establishes compensation for victims. Another good example is Bolivia’s 2013 law which establishes penalties for the perpetrators and educational personnel who fail to take action. 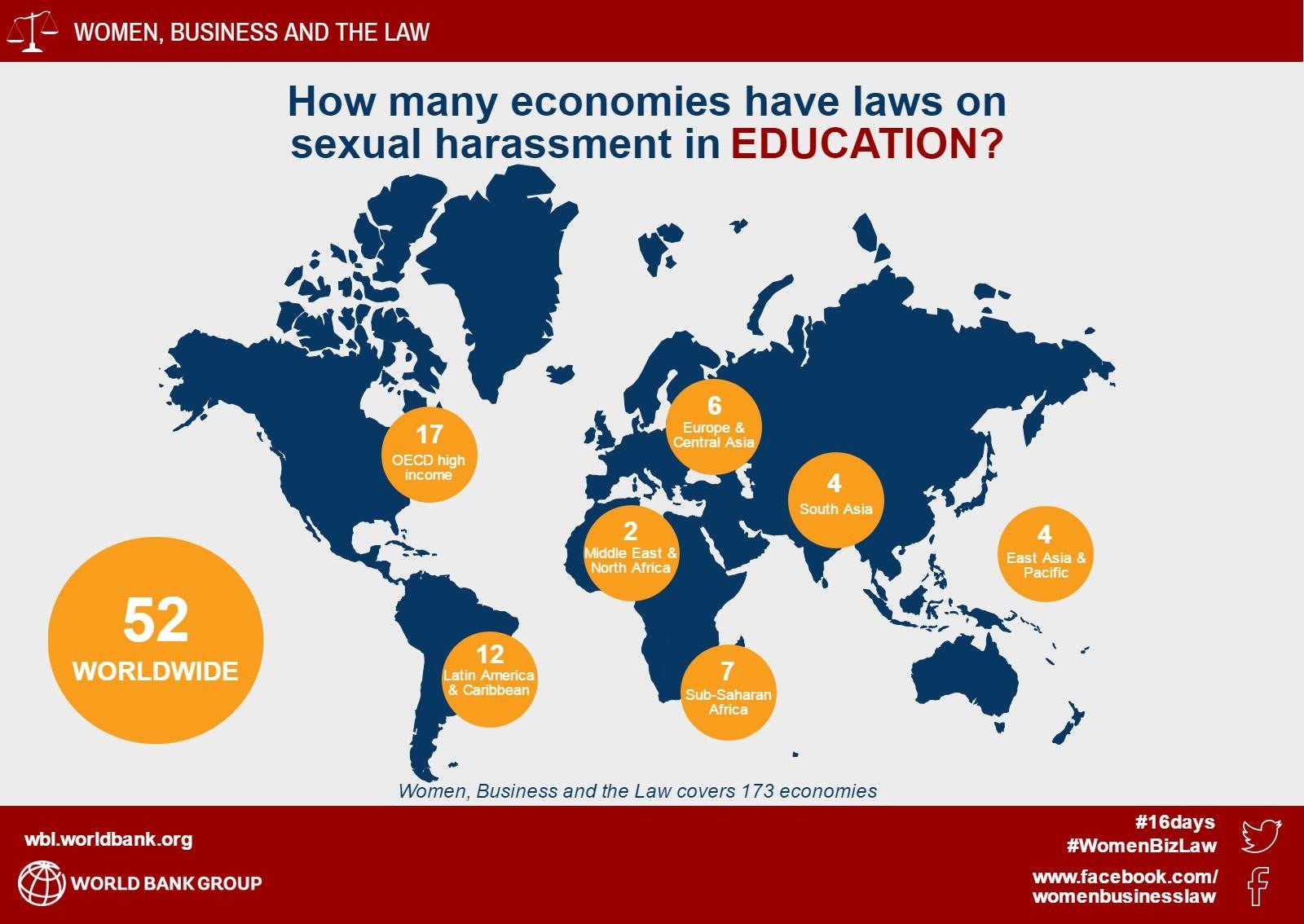 What can you do to stop school-related violence against women and girls? Join us in the #16days of Activism Against Gender-Based Violence Campaign and let the world know that only when schools and universities become safe spaces free from violence, girls will be able to fully exercise their right to education.

thanks for discussing a burning topic- it is applicable in Asian countries including Indian villages/ rural pockets.