COP26 helped focus global attention on the challenge of transitioning out of coal. In recent months, however, the war in Ukraine has led to a rise in coal use, as a short-term replacement of Russian oil and gas. But in the medium term, both advanced and developing economies will need to accelerate the coal transition to meet Paris Agreement targets. Decisive actions and financial resources are essential, but success will ultimately depend on effective policies to deal with the resulting disruption to jobs, reflected in the call for a “just transition.”

Our new World Bank report – “Global Perspective on Coal Jobs and Managing Labor Transition out of Coal” – analyzes the jobs challenges of the coal transition, and suggests a way forward. It includes detailed case studies of labor market dynamics in coal regions in Indonesia, India and South Africa.

The challenges are complex but not intractable

Coal phaseout will affect mine workers as well as workers in other sectors.

Coal generates many indirect jobs in the coal value chain – some formal, some informal. Coal also has a disproportionate influence – sometimes positive, sometimes negative – in local economies. It is often an economic driver (e.g., the main industry in town, many times the only export industry).

In some regions with high coal dependence, well-paid coal jobs pull up wages in other sectors. But the downside is that this can also “crowd out” other activities, limiting job opportunities for other workers.  Limited diversification can also make it harder to transition to other activities when coal demand falls.

Our analysis shows that coal districts in India, Indonesia and South Africa have highly distorted local labor markets and we find clear evidence of crowding out. Closing coal mines in these settings will disrupt local economies and create economic hardship in communities.

Lessons from the United States and Poland

Past mine closures in the United States and Poland have highlighted the high fiscal and economic costs of large-scale layoffs that are badly planned, supported by insufficient new investment, and hampered by poor policy design and coordination. Often, the affected regions remained severely depressed for decades. As the world’s largest coal producers begin their own transitions, these lessons will be highly relevant.

The World Bank is supporting coal regions in transition across the globe, using diagnostic and advisory tools to help governments prepare. Key steps in the pre-closure planning phase include creating effective governance structures for coordinating across ministries, addressing regulatory impediments, and designing effective policies to facilitate mine closure and help transition workers to new jobs.

Traditional labor policy instruments are an integral part of governments’ toolkits—but they are often not enough to achieve a “just transition” for all affected workers and communities.  Additional policies and programs at the national and local levels will be needed to mitigate the impact on affected workers, whether they are direct mine employees, or working in the coal value chain, or employed in local businesses near the mine sites.

There are five clear channels to facilitate the transition (see figure below):

The first three policy channels require coordination and can be effectively delivered through a one-stop shop mechanism. Adding a sustainability lens would support a green economic transition and help ensure that workers do not simply transition to sectors that are similarly unsustainable. 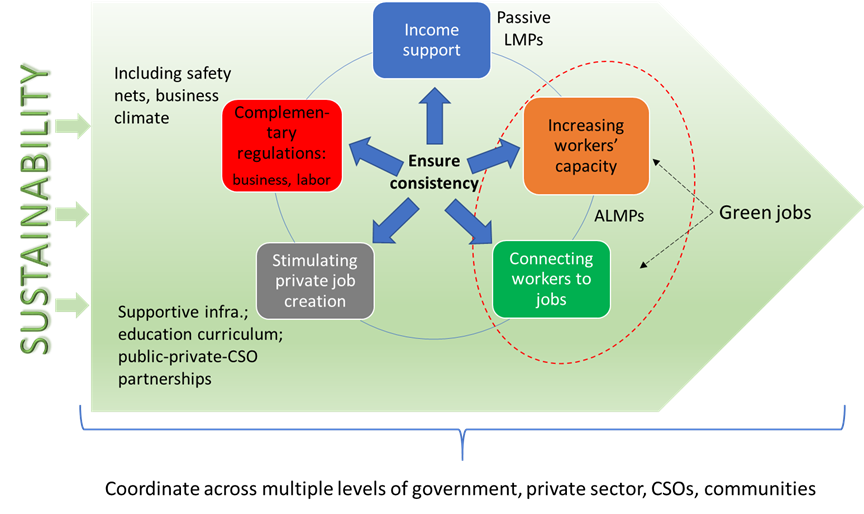 The role of governments needs to be proactive and multi-faceted

A well-planned and systematic process of coal mine closures can support the reallocation of affected workers to alternative jobs and mitigate the economic, social, and political costs of transition. Governments must provide strategic direction and leadership, coordinate with stakeholders, help arbitrate between competing interests, and mobilize financing for investment in a positive, sustainable transition.