Vaccinating the world against COVID-19 should be a top development priority.  We must keep reminding ourselves of the reason for ensuring mass vaccination of the entire world: no one is safe anywhere until everyone is safe everywhere.

Yet, the global roll out of vaccines is progressing at two alarmingly different speeds, resulting in a deep divergence between Africa and the rest of the world. Of the 6.4 billion vaccine doses administered globally, only 2.5% have been administered in Africa – even though the continent accounts for a little over 17% of the world’s population.

To date, under 2% of people living in Africa’s low-income countries (LICs) have been fully vaccinated, and vaccination rates are still below 1% in many countries.  For Africa’s lower middle-income countries (LMICs), the figure is under 10%. In comparison, over 60% of the population in advanced economies is vaccinated. Africa’s low vaccination rates are threatening lives and livelihoods, with consequences for Africa’s recovery as well as for global economic recovery. 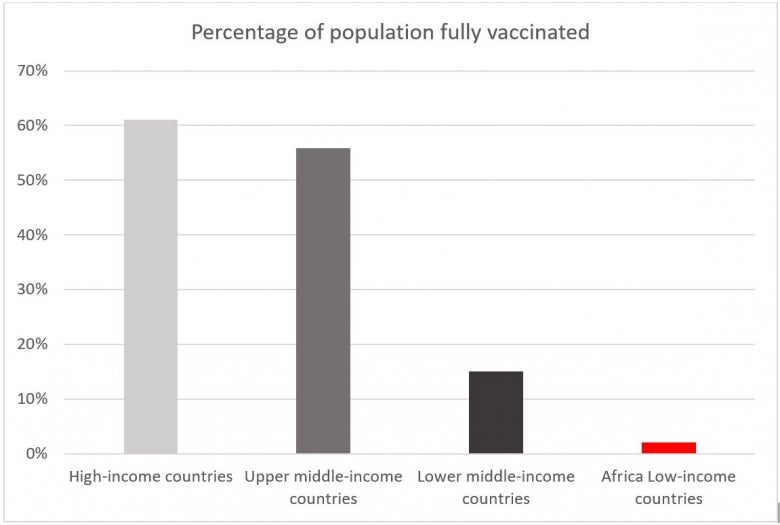 A key constraint has been the supply of doses, with countries across Africa finding themselves at the back of the vaccine delivery queue. Only around 7% of the total doses secured by, or for, LICs in Africa have been delivered to date and the figure for LMICs is around 16%.  Over 800 million more doses need to be delivered before year end to vaccinate 40% of Africa’s population by end-2021 (with a two-dose regimen); 1.3 billion more doses need to be delivered to vaccinate 60% of the continent’s population.   And new variants may require higher vaccination rates.

Many countries in Africa need to ramp up their daily vaccination rates (per 1000 people) by four to five times, or more, between now and year-end to reach 40% vaccination coverage by end-2021. This may seem daunting but the experience of countries like Tunisia and Senegal demonstrates what’s possible when countries are able to access vaccines. Tunisia, for example, has been able to achieve a 20-fold increase in its vaccination rate over the past six months, with financing from the World Bank that supported access and deployment. Tunisia has fully vaccinated over a third of its population and is set to achieve 50% coverage by year end.  Similarly, and with support from development partners, including the World Bank, Senegal has been able to ramp up vaccination rates:  at the height of the third wave of the pandemic, Senegal administered on average 17,000 doses per day with a peak of 41,586 doses administered in one day in mid-August. It still has some way to go before reaching a 40% coverage target by year end and now needs more doses to administer.

There’s an urgent need for collective solutions to accelerate delivery of vaccines for the countries that need them the most. To this end, the Multilateral Leaders Task Force - consisting of the World Bank, WHO, WTO and IMF - has advocated specific actions by governments and vaccine manufacturers . The Task Force has called on countries that have doses in excess of what they need to urgently swap their near-term delivery schedules, release vaccine companies from contracts and options, and fulfill their donation pledges, so that more doses can be delivered to Africa and other countries in need.

Of the 6.4 billion vaccine doses administered globally, only 2.5% have been administered in Africa – even though the continent accounts for a little over 17% of the world’s population.

The Task Force has also called on vaccine companies to prioritize and fulfill their contracts to the African Vaccine Acquisition Trust (AVAT) and COVAX, accelerate delivery, and share details on month-by-month delivery schedules for vaccine shipments.  Another focus is on working with countries to address trade and regulatory barriers that are posing constraints to the supply and equitable delivery of vaccines. And the Task Force is working with the private sector, governments, and other partners to help diversify production capacity to ensure access to vaccines for low- and lower middle-income countries in Africa and beyond.

At the same time, countries need to be able to deploy vaccines, when they arrive. Our data, publicly available on the Task Force website, indicate that many countries in Africa are administering doses fairly effectively, although more effort is needed, particularly in some of the poorest countries. In Africa’s LICs, around three-fifths of doses delivered have been administered and in LMICs, this ratio is three-fourths.

Through vaccine financing operations, the World Bank is already assisting 61 countries globally, more than half of which are in Africa, with vaccine procurement and, also, with closing country-level deployment gaps – including the transportation and transfer of vaccines, cold-chain capacity, training of vaccinators and other related workforce solutions, building trust in immunizations through citizen and community engagement, and strengthening data and tracking systems for vaccine distribution.

Partnerships have played a critical role. For example, we are partnering with the African Union and the Africa Centers for Disease Control to support AVAT to help countries purchase and deploy single-dose COVID-19 vaccines for up to 400 million people across Africa; UNICEF is providing logistical and delivery support.  Over 40 countries on the continent have requested doses through AVAT under this partnership with the World Bank. As the picture (below) shows, good progress is being made on contracting, with orders through AVAT now ready for most countries and doses beginning to flow in. We are also working with COVAX to accelerate COVID-19 vaccine supply for countries through a financing mechanism that builds on Gavi’s Advance Market Commitment cost-sharing arrangement. And countries are beginning to receive doses through COVAX and through direct contracting with suppliers. 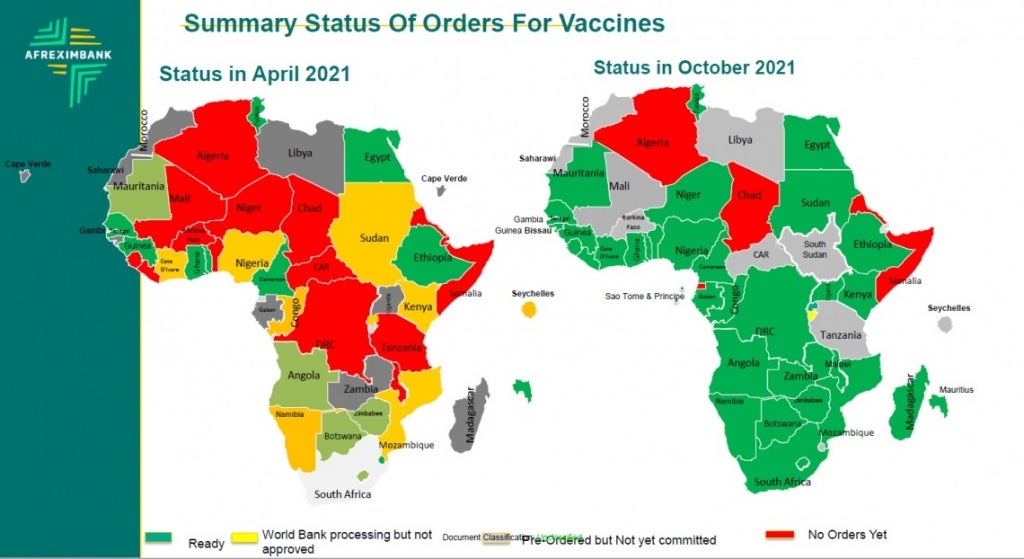 Greater global solidarity and faster action is now needed to deliver the doses that Africa urgently requires to vaccinate its population. This is not just an imperative for Africa but for the world.