The Many Faces of Corruption in the Russian Federation

"No single national score can accurately reflect contrasts in the types of corruption found in a country." Michael Johnston, 2001

While administrative corruption distorts the implementation of laws and regulations, state capture distorts their content to favor certain firms or officials. The term, state capture, not only applies to capture of the state by private firms, but also to cases where high-level government officials “capture” profitable private firms, allocating their assets or top management positions to political allies. The common element to these two problems is “crony capitalism,” with blurred boundaries between the private and public sectors encouraging rent seeking, distorting market competition, and undermining public trust in government and markets.

The 2011/12 Russia BEEPS (Business Environment and Enterprise Performance Survey) saw the return of several state capture questions that had been included in the 1999-2005 BEEPS, but dropped from the 2008 survey. Trends in state capture between 2005 and 2011 in Russia are unfavorable. The graph shows the percentage of survey respondents claiming that private gifts and payments made by firms in order to affect laws, decrees and regulation had a “major” or “decisive” impact on their business. This percentage doubled for one question (on local and regional officials) and tripled for two other questions (on federal level officials). 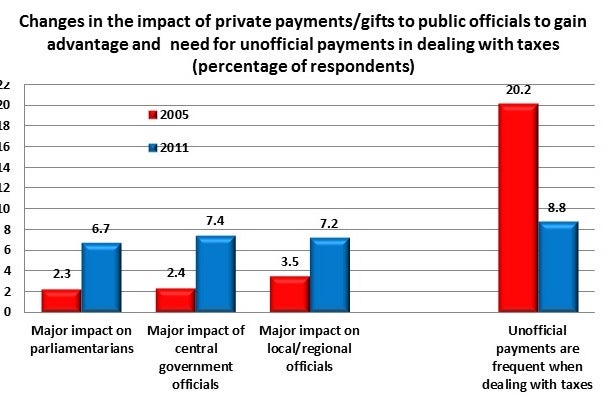 In general, at the country level, the two types of corruption are empirically correlated among countries in the emerging Europe and Central Asia region: some countries such as Slovenia and Estonia ranked well on both, while others such as The Kyrgyz Republic and Ukraine ranked poorly on both (BEEPS 2008 for administrative corruption, WEF 2008 survey for state capture). However, the positive relationship was relatively modest in strength, and several countries ranked highly on one concept but low on the other. For example, Hungary ranked third best on administrative corruption in the region, but ranked third worst on “state capture.”1 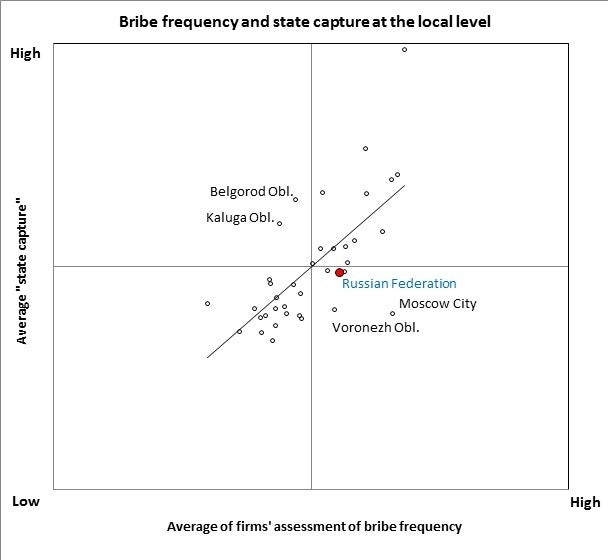 National rankings on broad indexes of corruption are often featured in media stories and even research studies.   The Russian case exemplifies how using a single number characterizing corruption in a country can obscure sizeable variation across regions and types of corruption, and hamper the design of effective anti-corruption strategies. It is good news that administrative corruption is going down, as this is the type of corruption that affects most small and medium-sized firms.

It would also be interesting to see what happens to grand corruption over the long term when administrative corruption is reduced and no longer tolerated by firms (e.g. as in Singapore or now in Slovenia and Estonia). Presumably it would lead to societal demand to clean up the political level.