Cities have always been the driving forces of world civilizations. What Niniveh was to the Assyrian civilization, Babylon was to the Babylonian civilization.  When Peter the Great, third in the Romanov Dynasty, became Russia’s ruler in 1696, Moscow’s influence began to expand. Peter strengthened the rule of the tsar and westernized Russia, at the same time, making it a European powerhouse and greatly expanding its borders. By 1918, the Russian empire spanned a vast territory from Western Europe to China.

As Peter the Great and his successors strove to consolidate their reign over this empire, major social, economic, cultural, and political changes were happening in the urban centers. Moscow led these changes, followed by St. Petersburg, which was built as a gateway to filter and channel western civilization through the empire. By fostering diversification through connectivity, specialization, and scale economies, these cities started the structural transformation of the Russian empire away from depending on commodities and limited markets in a way that more effectively served local demand. 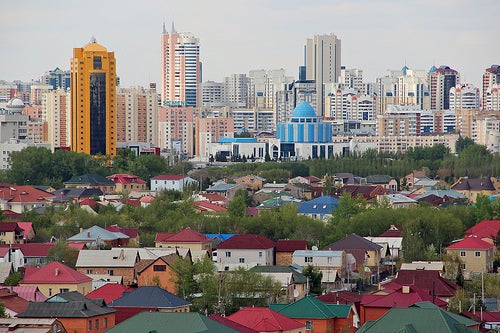 The Soviet era altered this dynamic.

Return of market as the main driver of the society: The failure of the Soviet economic model opened the former Soviet Union to market-oriented reforms that stimulated growth and integrated the region into the global economy. Within the region, production and intraregional trade have significant potential to expand.

Rise of the European Union (EU): Western Europe has risen in prominence, purchasing power, and ease of access. Further, the EU has adopted an explicit policy to deepen its economic ties with Eastern European countries through the European Neighborhood policy.

Rise of Asia: China, Japan, and the Republic of Korea have been the most dynamic growth stories of the past 50 years. They will offer new trade opportunities as they continue to integrate with the world. India joined them two decades ago and is also reaping the growth benefits of reforms and new investments.

In this new context, thriving cities are key drivers of growth. Around the world, leading cities play a key role in production and export by delivering a range of services. That, in turn, helps sustain economic activities, and drive urbanization dynamics in the country. Leading cities tend to be well connected domestically and externally, and offer the most diversified production. Leading Eurasian cities in the former Soviet countries are no exception, and could play a much greater role in driving the integration of the region into world markets.

But for this to happen, policy makers in all Eurasian countries need to  plan cities more effectively to contain congestion and maximize agglomeration economies; improve city connectivity both internally and with key global  hubs; green their cities to make them more attractive to young and talented workers; and change how cities are financed to allow other Eurasian cities to complement Moscow, St. Petersburg, and Kiev as the anchors of this region in world markets. Wonderful post with some great information, but I wonder if you didn't mean that Eurasian countries are facing new "opportunities" rather than "challenges". The issues you identify seem promising to me. Bodes well for a successful Eurasia.