Toward a linked and inclusive economy

While some studies predict automation to eliminate jobs at a dizzying rate, disruptive technologies can also create new lines of work. Our working draft of the forthcoming 2019 World Development Report, The Changing Nature of Work, notes that in the past century robots have created more jobs than they have displaced. The capacity of technology to exponentially change how we live, work, and organize leaves us at the World Bank Group constantly asking: How can we adapt the skills and knowledge of today to match the jobs of tomorrow?

One answer is to harness the data revolution to support new pathways to development. Some 2.5 quintillion bytes of data are generated every day from cell phones, sensors, online platforms, and other sources. When data is used to help individuals adapt to the technology-led economy, it can make a huge contribution toward ending extreme poverty and inequality. Technology companies, however well intended, cannot do this alone.

To this end, the World Bank Group is partnering with LinkedIn to use its Economic Graph –      insights from its 546 million members – to identify avenues for reskilling or upskilling workers. This new source of data helps us understand which skills are in highest demand, what industries are gaining or losing workers, and where workers are located. 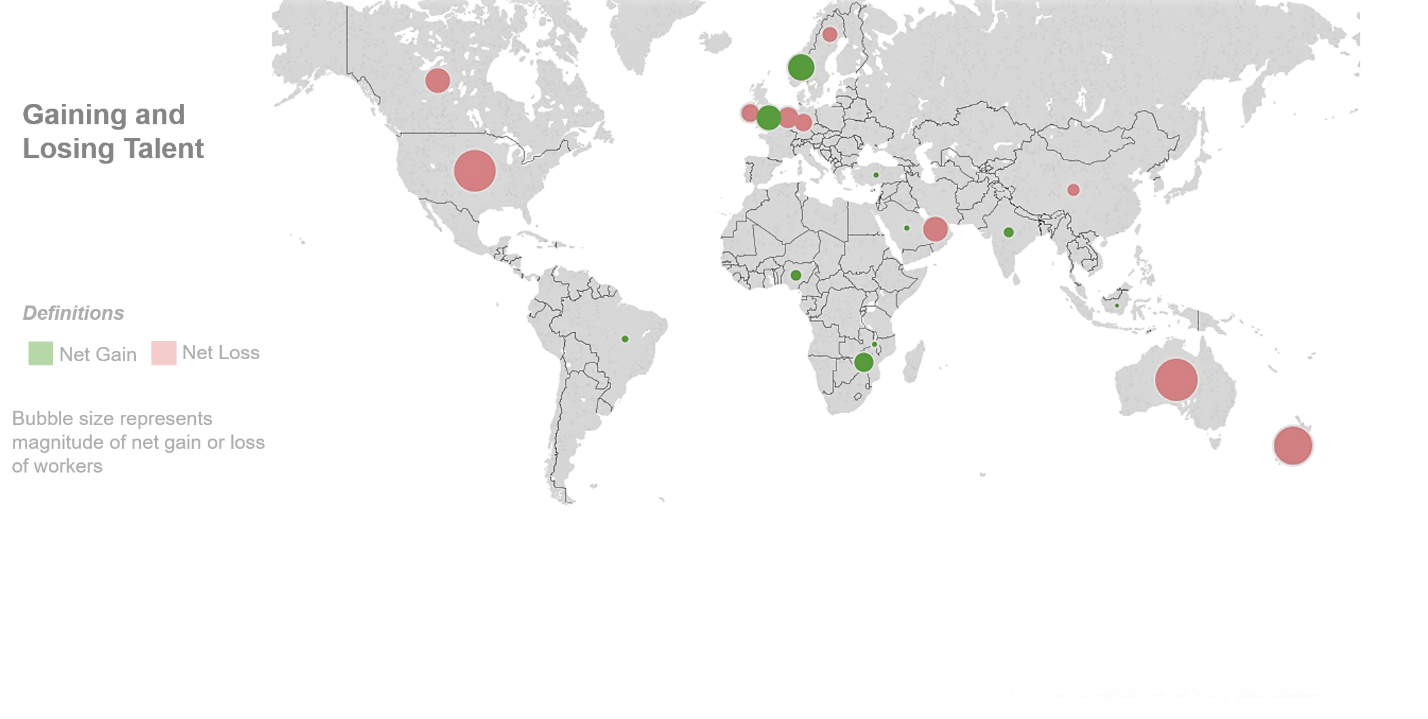 LinkedIn data reveal the top places from which South Africa has attracted talent and also where talent has migrated.

With enhanced information at the country and city level, we can help governments identify skills demanded by expanding industries and the training programs needed to support them. This, in turn, will help countries to create more (and better) jobs.  At a time of rapid technological change, when automation is bringing industry shifts and worker displacement, LinkedIn data provides an “early warning” system that can help make public policy responses more effective.

For more than seven decades, the World Bank Group has worked across economic sectors to end extreme poverty and boost shared prosperity around the world. Our Human Capital Project is forming a broad coalition of stakeholders to assess and improve the skills of young people. We are producing extensive research on the links between investments in people and economic growth, and we’re working to accelerate financing for investments in human capital.

The LinkedIn partnership is one of many collaborations we’re building with the private sector, working with companies such as Airbnb and Amazon to harness the data revolution for social good. Last month at the Mobile World Congress I announced a partnership with GSMA, the global trade body representing more than 800 mobile operators, around how to unlock data from mobile devices and the Internet of Things to solve critical development challenges.

In my keynote address, I mentioned that with smart phones, the internet, and social media nearly everyone will know how everyone else lives. Our economists found that as people access the internet, their reference income – the income to which they compare their own – goes up, which raises aspirations. And some studies estimate that by 2025, 8 billion people around the world could have access to broadband, so there’s little question that aspirations will continue to rise. Training and education programs need to keep pace with peoples’ aspirations. If they don’t, and if aspirations are met with frustration, countries may go down the path of fragility, conflict, violence, extremism, and migration.

At the World Bank Group, we believe that disruptive technologies can help societies become more resilient and build new drivers of economic growth. Eighty percent of people in the developing world have a mobile phone—more than have access to schooling. Technology changes not only how we interact with one another, but also what we know about inequality and how to solve it.

Making sure today’s students can compete in tomorrow’s economy requires a vision built on the knowledge and expertise of both the private and public sectors. A development revolution can match and complement the Fourth Industrial Revolution. I have never been more hopeful that by leading coalitions and partnerships, we can support new areas of growth toward a more tightly-linked and inclusive economy in the years and decades to come.