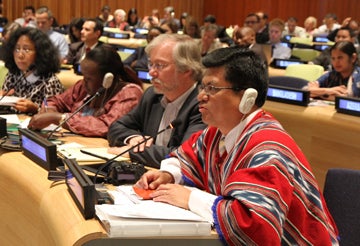 After six months as the World Bank's Senior Adviser for Indigenous Peoples, I have found that we have a golden opportunity to strengthen our commitment to Indigenous Peoples and bring them in as partners as we work to fulfill the World Bank’s mission of eradicating extreme poverty, achieving shared prosperity, and fostering sustainable development.

I have had the opportunity over the past several months to launch a conversation with Indigenous Peoples around the world. It began as a preliminary discussion of how best to consult around our safeguards policies, but it has become much more, in large part due to the tremendous energy and enthusiasm of indigenous groups.

In our first meeting in Guatemala this spring, we were talking with Mesoamerican representatives about the outreach we would be starting soon around safeguards policies. They listened and then said: Well, what we think you’re trying to do is actually to have a dialogue with us. Through dialogue, you do not just ask us what we think of a finished or semi-finished product, but rather you listen to our points of view, and we have a conversation about it, a discussion, to reach an agreement. And that’s what we’ve done, and we’ve received expressions of approval, enthusiasm and hope from Indigenous Peoples in many parts of the world – Russia to Thailand to Peru.

Many participants in these discussions were surprised because they perceive that this is not the way governments, international organizations, and others typically approach dialogue with Indigenous Peoples. The dialogue is now going well beyond World Bank safeguard policies. The groups want to discuss ways they can participate in the planning for sustainable development in their home countries and how the World Bank can work with Indigenous Peoples as partners for development.

The lesson for all of us is to embrace a participatory approach. We can learn from Indigenous Peoples outside of the immediate technical issues at hand. 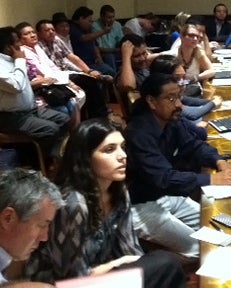 At present, we’re in the process of opening doors – establishing a way to communicate better and provide channels for greater participation, but recognizing that the interaction at the technical level is where the real tangible achievements will be obtained.  The greater value will come in the future as technical experts work more closely with Indigenous Peoples. They are committed to their growth and development; they live in large territories and are owners of thousands of hectares of  forests, they also have centuries of untapped knowledge – from adapting agriculture to the challenges of climate change to how to sustainably live in the richest forests in the world and in fragile ecosystems.

I have already started to hear from World Bank country directors that they are eager to discuss agriculture, ecotourism, energy, forestry or roads with Indigenous Peoples in order to learn from them and find ways for World Bank projects to have greater impact and sustainability. I look forward to our first workshop in Indonesia with Asia Pacific Indigenous leaders later this month.

Luis Felipe Duchicela is the World Bank's Senior Adviser for Indigenous Peoples. Prior to joining the World Bank he was the Executive Director of the Amazon Conservation Association and a Regional Director for the Rainforest Alliance in Central America and the Andean-Amazon. He is Ecuadorian, of Quechua descent from the Puruha People of the Chimborazo province in the central Andes of Ecuador, and served as the first Secretary of Indigenous and Afro-Ecuadorean Affairs in the Government of Ecuador. If human population dynamics is essentially common to the population dynamics of other species and, consequently, if food supply is the independent not the dependent variable in the relationship between food and population, then a lot of what has been reported in this NBL thread could be distractions that serve to dismiss rather than disclose vital but unwelcome science of what could somehow be real regarding the human population and, more importantly, why our behavior is so utterly destructive of everything we claim to be protecting and preserving. May I make a request? Could we focus now, here, on whether or not human exceptionalism applies to its population dynamics alone or is the dynamics of all species, including human beings, similar? Whatever your response, please make reference to scientific research that supports your point of view.
It seems to me that if we keep engaging in and hotly pursuing worldwide overproduction, overconsumption and overpopulation activities, distinctly human activities that cannot be sustained much longer on a planet with size, composition and ecology of Earth, then the human species is a clear and present danger on our watch to future human well being, life as we know it, and environmental health. If we can see ourselves to be ‘the problem’, then it is incumbent upon us to bring forward the best available evidence from science, especially when that evidence happens to relate directly to why we are pursuing a soon to become, patently unsustainable (superhigh)way of life. A tip of the hat is due Rachel Carson for making me aware of the superhighway. Should humankind emerge from ‘the bottleneck’ E.O. Wilson imagines for us in the future and somehow escape the precipitation of our near-term extinction, how are those survivors to organize life sustainably and not repeat the mistakes we are making now… and have been making for a long time? Without knowledge of why we are doing what we are doing, every one of us is forever trapped in an eternal recurrence of unsustainable life cycles, I suppose.
Sincerely yours,
Steve Salmony
PS: Rachel Carson’s quote,
We stand now where two roads diverge. But unlike the roads in Robert Frost’s familiar poem, they are not equally fair. The road we have long been traveling is deceptively easy, a smooth superhighway on which we progress with great speed, but at its end lies disaster. The other fork of the road—the one “less traveled by”—offers our last, our only chance to reach a destination that assures the preservation of the earth.
Rachel Carson (1907 – 1964)

Luis,
Just a short note from an old high school classmate (Bonaventure 1972) to offer my congratulations and encouragement for your work with indigenous peoples!
Conrad Pomykala