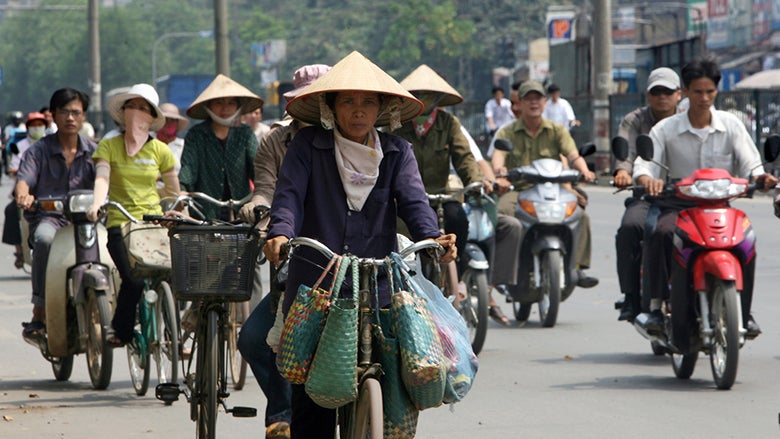 It’s nighttime and the streets are bustling in Vietnam’s cities and towns. Buoyed by years of strong growth, the country has a burgeoning middle class with purchasing power to sustain restaurants and cafes, full and open late into the night, busy retailers and a high penetration of mobile phones – more than one per person. The economy, however, continues to run on cash and a majority of adults still don’t have formal financial services such as a basic transaction account. Moving to a “non-cash” system is a priority for the government to increase efficiency, promote business and economic development and reduce poverty including in remote rural areas where traditional financial providers have difficulty reaching.

Since 2016 the State Bank of Vietnam, the country’s central bank, has been partnering with the World Bank Group on a comprehensive approach to financial inclusion which will result in a national financial inclusion strategy. While still in development, several key elements of the strategy are clear: a focus on digital finance including shifts in government payments to digital products and platforms; providing financial services to rural and agricultural communities and ethnic minorities, where growth has lagged and poverty rates are above the national average; and strengthening consumer protection and financial education so that the next generation of consumers are prepared for a modern financial marketplace.

Last week I was in Vietnam with Her Majesty Queen Maxima of the Netherlands, the United Nations Secretary General’s Special Advocate for Financial Inclusion, to support the country’s development of a national strategy including taking steps to establish a national coordination structure (inter-ministerial) to develop and execute the strategy.

Designing and developing an effective national financial inclusion strategy is key for a country to be able to successfully implement envisioned reforms, as it essentially provides a roadmap for the authorities to follow to achieve their financial inclusion objectives. Data from the Global Findex database underline the importance of this task – as of 2014 only about one-third of adults indicated they had a transaction account with a formal financial provider, far below the regional average of 69%.

Because of its sizeable population and relatively low financial inclusion rates, Vietnam is among the 25 priority countries where we are focusing our financial inclusion efforts  through the Universal Financial Access (UFA) by 2020 initiative which seeks to bring 2 billion unbanked into formal financial systems. Ensuring adults have access to a transaction account is a first step toward comprehensive financial inclusion, where people can make use of appropriate financial services, including savings, payments, credit and insurance.

According to our projections, many Vietnamese who are excluded from the formal financial sector do in fact have active financial lives. For example, 39% of adults save outside the formal sector, “under the mattress” or using informal means including savings clubs; 65% send or receive remittances outside the formal system or pay school fees or utility bills in cash. Some of the most important barriers to accessing and using formal financial services include:

Removing these barriers, through appropriate policies and legal and regulatory reforms, can help move consumers from the informal to formal financial sector with great effect – according to our estimates an improved policy environment could mean reaching an estimated 48 million adults with transaction accounts. On top of this, government-to-person (G2P) cash transfers can be digitized to reach an additional 3.7 million currently unbanked adults.

Also, research shows that countries that have invested in devising and implementing a national financial inclusion strategy (NFIS) have been more successful  and effective in reaching set targets. On average, there is a 17% increase in the percentage of adults with an account at a formal financial institution for countries that launched an NFIS after 2007, whereas the increase is only 9% for those countries that have not launched an NFIS. Based on this analysis, our estimates show that Vietnam can possibly reach to an estimated 11.6 million adults by designing and implementing a national financial inclusion strategy.

The State Bank of Vietnam is the lead implementing agency for financial inclusion and development of the national strategy. However, many other ministries and the private sector will have important roles to play and this week meetings with the UNSGSA have included several of these such as: Expanding and extending formal financial services to reach millions of unbanked and underbanked adults will help Vietnam  achieve both poverty reduction and continued dynamic growth, propelling the nation forward toward the vision described in the Vietnam 2035 report of greater prosperity, inclusion and accountability.

We are extremely proud to be partners with Vietnam on this critical agenda.