Action at scale: how to accelerate access to adequate and equitable sanitation and hygiene in Africa

Globally, 2.4 billion people still live without access to basic sanitation – and over 760 million of these people live in Sub-Saharan Africa. Today only 27% of Sub-Saharan Africa’s population has access to basic sanitation and 220 million people across the continent still practice open defecation – in some countries, this number is increasing, as service providers fail to keep pace with population growth.

The World Bank recently launched the Human Capital Index, which assesses the extent to which human capital in each country measures up to its full potential. Even if a child is well-fed in the first years of life, if the quality of his or her water supply and surrounding environment is poor due to a lack of sanitation, then that child is more likely to get diarrhea and other excreta-related infections, which ultimately lead to poor health, stunted growth, and in many cases, death. We are deeply committed to addressing these challenges in Africa, where 13 countries have already signed on as early adopters to improving Human Capital.

With US$13 billion spent on sanitation in the past 25 years, the World Bank is reaching millions of people across the world and in Africa. Harnessing innovative approaches to help end open defecation and assisting households and communities move up the sanitation ladder are core areas of our business. In fact, we are addressing water and sanitation issues with large-scale financing and technical assistance, supporting increasing access to sanitation services, improving the quality of services being delivered, and supporting the professionalization of service providers.

But to tackle the pressing sanitation challenges in Africa, we need “action at scale.” As the African proverb goes, “If you want to go far, go together.”  The World Bank looks to Africa’s leaders for political commitment and championship that can allow us to collectively support big leaps and innovations in sanitation. We also count on collaboration with key development partners as a critical element for success. Together with the Bill & Melinda Gates Foundation, we are spearheading an initiative to encourage a radical shift in the way urban sanitation challenges are tackled in a rapidly urbanizing world. We are working with UNICEF, WaterAid, Plan International and USAID to “rethink” rural sanitation programming. We also continue to partner with the bilateral and multilateral development banks on the sanitation agenda to build synergies at the country level, share knowledge, better utilize public funding, and take innovative solutions to scale.

Aiming to generate political momentum for sanitation and hygiene, as well as provide a pan-African forum to showcase best practices and support problem solving, the 5th AfricaSan Regional Conference on Sanitation and Hygiene (AfricaSan5) took place in Cape Town, South Africa, from Feb 18-22. This year, AfricaSan also partnered with the 5th International Fecal Sludge Management Conference (FSM5) to deliver a unique synergistic program that has leveraged the political might of the AfricaSan Conference along with the practical and technical output of the FSM Conference.

The Bank co-convened two sessions at AfricaSan: “Funding Urban Sanitation in Africa: The Role of the African Urban Sanitation Investment Fund and Other Mechanisms and Insights” with the African Development Bank (AfDB) and “Investing in Sanitation, Investing in People: Laying the Foundations for Human Capital in Africa” with Africa AHEAD. At FSM5, the Bank delivered one session on “Container Based Systems and Capacity Building” and two half-day workshops: “Public Health Data in Sanitation Planning” and “The Missing Link in the Sanitation Chain: Improving the Conditions of Sanitation Workers.” Sanitation remains a top priority for the World Bank, and these sessions encapsulated the thematic areas of our work in supporting countries to achieve safely managed sanitation and improve the health and quality of life for all people.

In Cape Town, we had fruitful conversations with partners too: with the Gates Foundation, we discussed next steps for the recently launched “Urban Sanitation Innovation Partnership (USIP)”; with the African Development Bank (AfDB), we discussed building on our existing collaboration and working more closely in select countries where scale is of the essence; the Toilet Board Coalition presented their work crowding in local private sector engagement for sanitation provision, including the ongoing pilot case in India, and the opportunities for WBG to collaborate with these local coalitions;  with UNICEF, we discussed their new urban approach to sanitation and ways to strengthen coordination across both our teams to help guide country staff in harmonizing implementation strategies.

Dialogues with delegations from Nigeria, Kenya, Burkina Faso and Tanzania allowed us to review their different country sanitation goals, ongoing Bank program support, and critical actions needed to bring access to scale. In particular, the Nigerian delegation expressed strong interest in Bank support and their aspirations to declare Nigeria Open Defecation Free, given their current ranking of having one of the highest numbers of people still practicing open defecation.  Kenya expressed keen interest in replicating the successful countywide inclusive sanitation model piloted in Nakuru. The African Ministers’ Council of Water (AMCOW), who organized the event, presented their strategy for 2018-30 and expressed an interest in collaborating with the Bank on capacity building around the sanitation agenda, as well as on innovative WSS monitoring systems.

Clearly, events like AfricaSan5/FSM5 provide an impetus towards achieving commitments from past rounds—the Ngor Declaration on Sanitation and Hygiene—in which African countries and partners committed to accelerating access to adequate and equitable sanitation and hygiene for all and ending open defecation in Africa by 2030. The World Bank is committed to supporting this crucial agenda to help build the economic and social future of Africa envisioned by its leaders and its people. 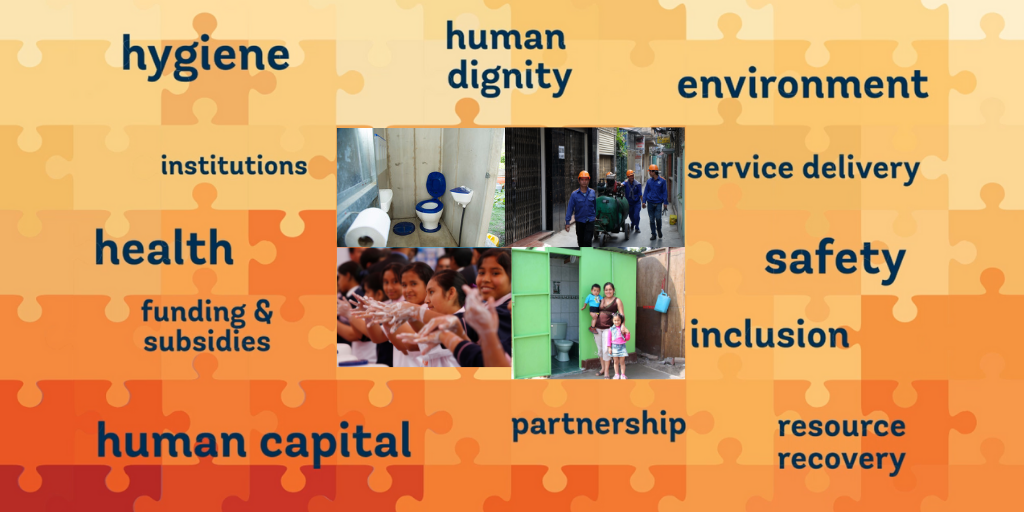