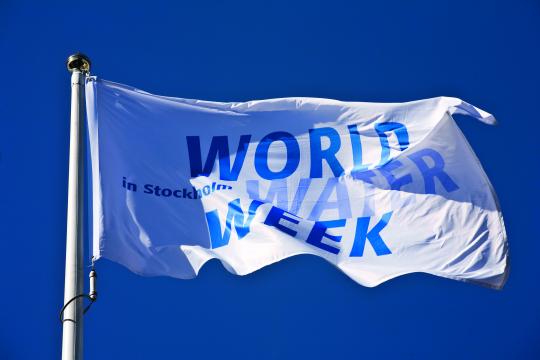 As I blogged a few weeks ago, the proposed WASH Post 2015 goals and targets for sanitation call for universal access to improved sanitation by the year 2030. I described how many governments have started working to achieve the goal of  universal access by taking steps to make the transformational changes and to stop doing “business as usual” in sanitation programs that have largely failed to deliver sustainable sanitation service delivery – especially for the poor. In addition to universal access, the WASH Post 2015 goals also call to progressively eliminate inequalities in access between population subgroups.

Currently, the most common disparities in access to sanitation are between rich and poor, between urban and rural, and between formal urban settlements and slums. The most recent data from the Joint Monitoring Programme (JMP) analyzed country trends in the past 10 years looking at sanitation access and equality of access between the poorest and richest. Overall rural access increased in The Philippines by 24% over the past 10 years and the inequality between the poorest and the richest decreased by 4%. In contrast, Vietnam increased rural sanitation access by 36% but inequality increased between the richest and the poorest by 16% (Table 1).


​The target of progressive elimination calls for a reduction in the differences in access between sub groups, such as rich and poor.

The target to progressively reduce inequity is fully aligned with the World Bank Group goals of ending extreme poverty and promoting shared prosperity.

In April at the Sanitation and Water for All High Level Meeting, President Jim Kim said:
“We cannot achieve these goals (ending extreme poverty and boosting shared prosperity) if we don’t help our clients fix sanitation, which is directly linked to poverty.” The World Bank Group is also now tracking inequality for improved sanitation service delivery (Table 2).

Governments, development partners and the private sector are testing innovations to increase equality in access to sanitation for the poorest 40%.  Emerging efforts include sanitation related poverty diagnostics to identify the disadvantaged populations and constraints to reaching them, developing sanitation poverty maps, revising financial strategies to use public investments to benefit the poor, targeted hardware subsidies for on-site sanitation facilities and, financial and other incentives for achieving results and changing behaviors.  Governments are also starting to learn how to integrate sanitation interventions into targeted poverty alleviation programs. And the private sector is increasingly developing sanitation products and services that are more affordable and desired by the poorest 40%.

Here are some examples: 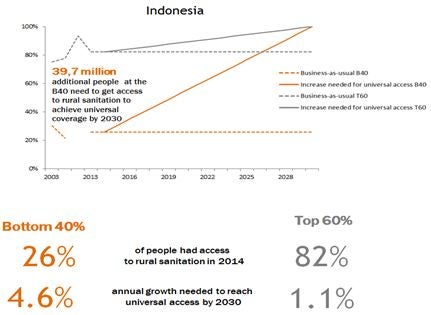 
​Poverty maps to geographically target interventions for the poorest populations.  Even though Vietnam has a relatively high GDP and high sanitation coverage, as shown below, there are pockets of poverty in the country and those pockets coincide with low sanitation coverage. These maps can also be overlayed with other indicators such as nutrition and stunting.


​Integrating sanitation into existing poverty alleviation programs. In Niger, the government’s cash transfer program is supporting poor families in return for “soft” conditions where mothers are requested to attend training in essential practices in health, nutrition, and sanitation. The Pakistan Poverty Alleviation Fund program targets the poor to empower them with increased incomes, improved productive capacity, and access to services to achieve sustainable livelihoods. A new pilot program requires communities to become 100% open defecation free (ODF) before development funds are granted. In the Philippines, the Pantawid Pamilyang Pilipino Program, or 4Ps, involves monthly cash grants to the “poorest of the poor” families, on condition that their school-aged children remain in school, mothers go for regular checkups and parents attend family development sessions. The Government’s Department of Social Welfare and Development (DSWD) is starting a pilot in six municipalities to integrate sanitation in the Program by inviting 4P families to sanitation workshops as part of the family development sessions. Local sanitation promoters will follow-up with those 4P households to check if they wish - and qualify - for taking a sanitation micro-loan with local micro-credit institutions, possibly in combination with additional subsidy support by the local government.

Working with private sector and micro-finance institutions to reach the poor. In Cambodia, experience with sanitation micro-loans introduced by two socially oriented Micro Finance Institutions has shown that the uptake of such loans has been poor-inclusive. Spreading payments over time has helped poor households to invest in their own affordable and aspirational toilet. In Kenya, private sector plastics manufacturers worked with the government and development partners to carry out formative research on consumer demand and have now moved into plastic slab production. A total of five new latrine slab products in a range of price points that include sanitation slabs that are more affordable and accessible by poorer households have been launched.

Having a target on progressing reducing inequality is a BIG DEAL - it means that governments will be accountable for this goal at the global level. The World Bank Group is fully aligned with the goal of tackling inequalities in service delivery. Although extremely challenging, governments, the World Bank Group and global development partners are already innovating and promising efforts are underway. To deliver on this agenda of reducing inequalities and ensuring that the poorest 40% reach universal access by 2030, we need to collaborate and more effectively generate and share global knowledge on what is working to provide sanitation service delivery to the poorest.

​We want to know what knowledge you are learning and sharing at World Water Week. We are following #wwweek closely to find out. You can follow us @worldbankwater. As we in WaterAid are in the process of developing our new global strategy framed within the context of universal access to water, sanitation & hygiene by 2030, reducing inequalities in access to WASH services and making WASH central to poverty reduction & human development is something that WaterAid is fully committed to, working in partnership with local & national governments, NGOs, community groups and academic institutions. The challenge is in identifying the root causes of these inequalities and collectively identifying ways to tackle these, so that the solutions are relevant to the local context for it to be sustainable in the long run !

Dear Eddy. Very interesting and useful insights. The issue of inequalities is a big challenge in both rural and urban centers and needs to be tackled through effective means and here, business as usual does not work. Approaches like direct cash transfers, micro-credit etc that are poor-inclusive need to be adopted. Though one foresees that government subsides could remain, as they are shaped by political economy of a given country, there is a need to pause and question the efficacy of these subsidies(specially for individual household investments) and also the means of delivering the same. Do you or others have such studies? Another important point is the effectiveness of institutional structures and capacity in place to deal with this massive challenge.
best wishes
Murty (Mumbai, India)

Interesting piece and very relevant to a study I am currently working on in Indonesia. Can you please site your sources for your data in Indonesia. Thanks much!

Some fascinating analysis here and I agree that the combination of a target on universal access and reducing inequalities will change incentives in favour of more efforts to reach the poorest quintiles.
Good too to highlight that a huge inequality is often between formal urban areas and slums. My concerns is that nationally applied poverty quintiles may not do the job of illuminating those urban inequalities - because we know that the cost of escaping poverty in urban areas is higher than in rural areas. The data that is available on infant mortality rates and stunting for children in urban slums are alarming and show the severity of the problem. I gather, though, that the JMP is not currently planning to report systematically on this inequality, which is disappointing.
Do you know of any good analysis that brings out this aspect of the inequality? Do you have any other information about how the standard reports are planning to handle it?