On inflation and water tariffs: What are the trends?

Why do inflation and water tariffs matter in a time of crisis?

The COVID-19 virus continues to spread globally, with supply chain disruptions resulting in declines in income and employment. The major economic disease of “scarcity” can especially take a toll in the most vulnerable segments of the population. There are, hence, additional worries that the disease could threaten food chains and supply systems and stoke inflation. Water tariffs are also at risk if utilities are not supported financially to contain production costs and keep revenue streams. The Economist magazine recently invoked that notion by stating that “[a]s COVID-19 shutters businesses and leaves supermarket shelves bare, some economists fret that the pandemic could lead to inflation making an unwelcome return.” Thus, we should take a look at how inflation and water tariffs have evolved in the last years to be able to foresee how COVID-19 may impact the affordability of water for everyone, particularly the poorest. 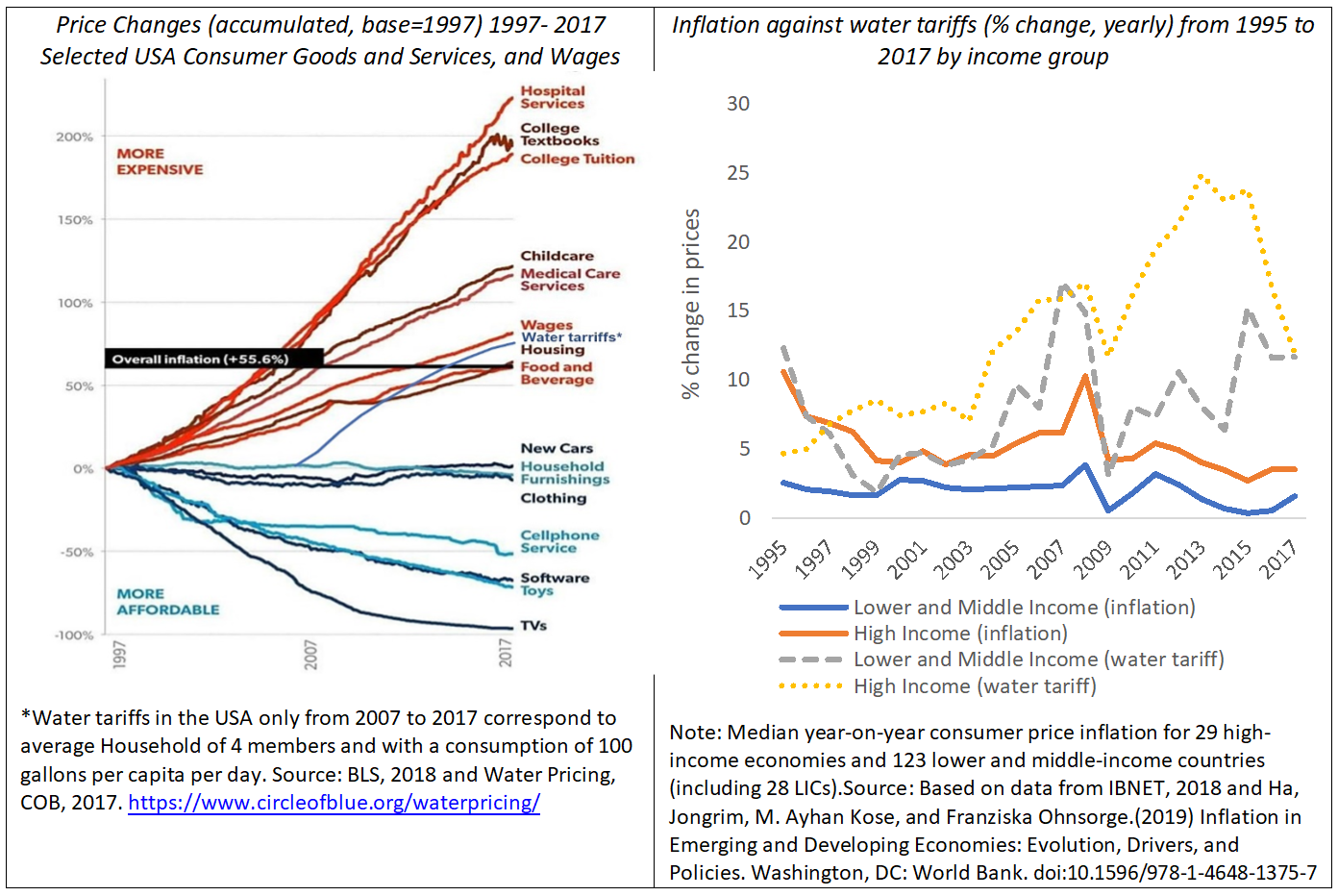 How do changes in water tariffs compare to overall inflation?

A key question to ask on the economics of water is: how do water tariffs change over time compared to the core inflation in different countries? Observing the trends in inflation and water tariffs matter because when these “prices” change abruptly or increase steadily over time, they typically contribute to the deterioration of the purchasing power and affordability of a given good or service. This particularly affects the poorest individuals. In a study published in 2019 by the World Bank, a global analysis of inflation was conducted that compared how prices have changed between emerging and developed economies. The report’s findings are quite compelling, stating that “since 1970, global inflation has undergone considerable swings around a pronounced downward trend”. These swings in inflation have generally been associated with either cyclical fluctuations in the global economy or sharp movements in oil prices. However, the report shows with strong evidence that around the globe, inflation has stabilized and is trending downwards. In spite of these tendencies, the relative importance of global demand shocks has increased since 2001, and accounts for 60 percent of global inflation variation. But how do these changes in prices compare to changes in tariffs, including those established for essential water and sanitation services?

What is inflation and what characterizes it? How do prices differentiate from tariffs?

A broad definition of inflation is a quantitative measure of the rate at which the average price level of a basket of selected goods and services in an economy increases over a period of time. The calculation for inflation is predominantly based on six measures: headline, food, energy and core consumer price index (CPI) inflation; producer price index (PPI) inflation; and gross domestic product (GDP) deflator changes. In many economies, including that of the United States, the CPI categorizes all expenditure items into major groups (food and beverages, housing, apparel, transportation, medical care, recreation, education and communication, and other goods and services). Included within these major groups are various government-charged user fees, such as water and sewerage charges, auto registration fees and vehicle tolls. However, fees and tariffs are usually adjusted for reasons beyond supply and demand forces: they could also be changed for political or technical reasons, or may undergo contemporaneous adjustments that respond to externalities or indirect costs of production (like scarcity or environmental issues).

The recognition of the economic interdependencies between tariffs and price changes (inflation) was first published in a research article in 1955. Core components of tariff changes affected by inflation usually include materials, energy costs, labor and taxes. However, there has always been limited information on how water tariffs are being decomposed into their “core” and “non-core” determinants. Understanding these two determinants of water tariff changes are important since “core” changes, like in the case of core inflation, reflects the relationship between the price of goods and services and the level of consumer income. If prices for goods and services increase over time, but consumer income doesn't change, consumers will have less purchasing power. In the case of water tariffs, when the “non-core” changes tend to dominate the “core” changes, there is the inherent issue of how the tariff becomes unaffordable to consumers (particularly the poorest). We know this is the case because many tariffs are increasing over time, according to data from the The International Benchmarking Network for Water and Sanitation Utilities (IBNET).

Why are water tariffs increasing more than core inflation in many countries around the world?

The graph above shows these tendencies. By separating the main “core determinants” of CPI in the United States (left panel), it can be observed how many services and food and beverages categories became unaffordable in the last 20 years, as have water tariffs. Other consumer goods, in contrast, became more affordable over time (relative price reduction over time). The exact reason why water tariffs became unaffordable in the United States lies in knowing what “non-core determinants” drove these tariff hikes over time.

The literature on efficient tariff design does not demonstrate solid evidence of the economic viability of increasing price structures for water. Moreover, the literature on water pricing often varies in terms of efficiency results because tariff structures are either not comparable or there aren’t available estimates of water demand, which helps account for difficulties in moving toward more efficient pricing rules in many developing countries. As a result, some tariffs are arbitrarily set, creating two adverse scenarios. One, in which the tariffs are set politically and do not adapt to changes in water production, distribution and accessibility costs, thus hindering utilities' cost-recovery capabilities. The second scenario occurs where such arbitrary tariffs need to be changed many times and create not only market distortions, but social discontent as well. In addition, these changes can be abruptly located above inflation levels, which progressively makes water services unaffordable, leading to the materialization of incentives for illegal connections or network dropout.

To support these arguments, a recent paper released information regarding the rate at which water and wastewater tariffs increase: Across 385 cities the average tariff has risen by 3.91%, which is double the inflation rate. The tendency, in line with the graphs presented above, is also true for developed economies: Portland, Oregon has the highest combined tariff with US$8/m3, whereas Denmark has the highest water cost of any of the countries with an average combined tariff of $7.07/m3. U.S. urban residents pay more for combined water and wastewater on average than city-based Western Europeans – annual growth of 5% over five years has seen US rates at $4.09/m3, which is 20 cents more than in Western Europe. If this tendency becomes true in developing economies, then much of the poor will not have access to these basic services, and will thus fall into an unescapable poverty trap.

In this time of undeniable turmoil and uncertainty brought by the COVID19 pandemic and the pausing of economic activity, economic and financial systems should respond to mitigate the silent burdens that inflation and spikes in the tariffs of basic public services have on the affordability of water for the poorest.