Integrated Water Management in Cities: Can we get it right this time? 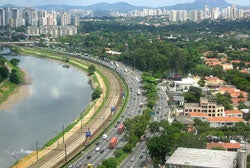 While on its path to becoming the largest city in the Americas, Sao Paulo used its natural capital - water - to generate electricity, fuel industry, and satiate its ever-growing population. Natural infrastructure was traded for the concrete form and the city’s great rivers paid a high price for industrialization.

The result? Tremendous growth (averaging 5% per annum) that stimulated rapid and unplanned migration to the city and environmental pollution.  Urban sprawl generated little to no infrastructure for managing water, sanitation and wastewater, or solid waste.  Clearing the land for houses caused erosion and compacted soils, and the resulting increase in runoff has made an already wet city even more prone to floods.

Today, thousands of urban poor people live in flood-prone areas of Sao Paulo, such as in shacks perched at the water's edge of the Billings hydropower reservoir. These same areas also suffer from deteriorating water quality.  In these high-risk favelas, the city has been using an Integrated Urban Water Management (IUWM) approach – which sees the entire urban water cycle as an optimizing unit within the wider river basin – to move communities toward resilience.

At the city’s IUWM workshop in December, supported by the Water and Sanitation Program (WSP) and other World Bank units, state officials recounted a $387 million Bank-financed effort to upgrade 52 slums and another $238 million currently going toward river restoration and service provision – both aiming to protect watersheds and the poor.

Setting the example for urbanizing Africa

Sao Paolo's experience has become a best practice case for several large cities in other parts of the world. In Africa, population growth, coupled with climate change, will similarly alter the urban landscape. Next year, Lagos is set to surpass Cairo to become Africa’s largest city. Sao Paulo and other cities in the Blue Water Green Cities Initiative set an example for reversing the trend of environmental degradation and unplanned urbanization in wet cities like Lagos.

Many of Africa’s secondary cities (those growing to 1 million by 2025) are facing the opposite challenge – too little water for too many people. This scenario was at the core of IUWM uptake in Windhoek, Namibia which has invested in water security for five decades and was among one of the experiences presented at the Africities conference in Dakar. Reclaimed wastewater supplies up to 35% of the city’s drinking water, and a dual pipe system conveys semi-treated effluent to irrigate municipal parks and sports fields.  The city has also shown willingness to prioritize environmental stewardship over land development by asking the national government to extend the city limits in order to conserve 10,000 hectares for aquifer recharge.

For cities like Nairobi or Dakar that suffer from both weather extremes, Seoul, Korea offers its experience implementing a comprehensive program for green growth. Having suffered $14 billion in flood damages between 2000 and 2010, this sustainable city now protects against such risks by giving value to the environmental services afforded by land and water resources.

While many practitioners are raising the alarm of water insecurity, the growth of African cities is an opportunity to plan new infrastructure in an integrated manner, or to “get things right” the first time around. But if integrated planning doesn’t happen before the masses move in, these countries have a clutch of urban restoration pioneers to turn to for advice.

Cases of successful IUWM show us that poor planning is not necessarily irreversible, but getting it right the first time can save time, money, and human health. The principles of IUWM are not new but they do need to become second nature for city leaders, urban planners, and citizens.  History need not repeat itself, especially since great examples of home-grown solutions abound.

This work was made possible by the World Bank's Water Partnership Program (WPP), a global program that supports innovative solutions in water. The WPP has promoted IUWM approaches in Africa, Latin America and the Caribbean, and Europe and Central Asia for the past three years. I did not get what was the IUWM that Sao Paulo achieved.

Thank you for your interest - this interview by David Michaud, Senior Water and Sanitation Specialist at the World Bank, explains in greater detail the IUWM experience in Sao Paulo. The Sao Paulo and other case IUWM studies have also been documented and are available here for further reading.