Marrakech, Morocco, 1950s: Situated 160 miles south of Casablanca, and 100 miles inland on the foothills of the Atlas Mountains, the Red City is being supplied as it has been for centuries with water through an intricate, self-sufficient network of “Khettaras” — man-made underground tunnels that captured runoff from the flanks of the Atlas. The city is now developing quickly, and gaining an international reputation for tourism. As water demand starts to outgrow traditional resources, utilities and farmers begin to tap into the local Tensift aquifer. By the 1970s, Marrakech soon relies almost exclusively on groundwater.

Fast forward 30 years into the 1990s: The city has become a booming luxury holiday destination, hosting 10 million tourists every year and poised to welcome the first World Water Forum. And yet, Marrakech is on the verge of a water crisis. The national water provider ONEE is struggling to keep up with the surging water demand: the utility's last Khettara has long dried up, and the aquifer yields have collapsed. Marrakech needs to look further and further away for surface water from other basins, sometimes hundreds of kilometers away. Tension is mounting with farmers and other cities when water is not sufficient to cater for everyone’s demand. Meanwhile, around 20 golf resort projects are pending approval by the Marrakech city authorities, the combined water use of which would represent a third of Marrakech's water consumption.

Such is the dilemma that the city has to contend with in the late 1990s; and yet, two decades later, Marrakech is thriving. How did they do it? 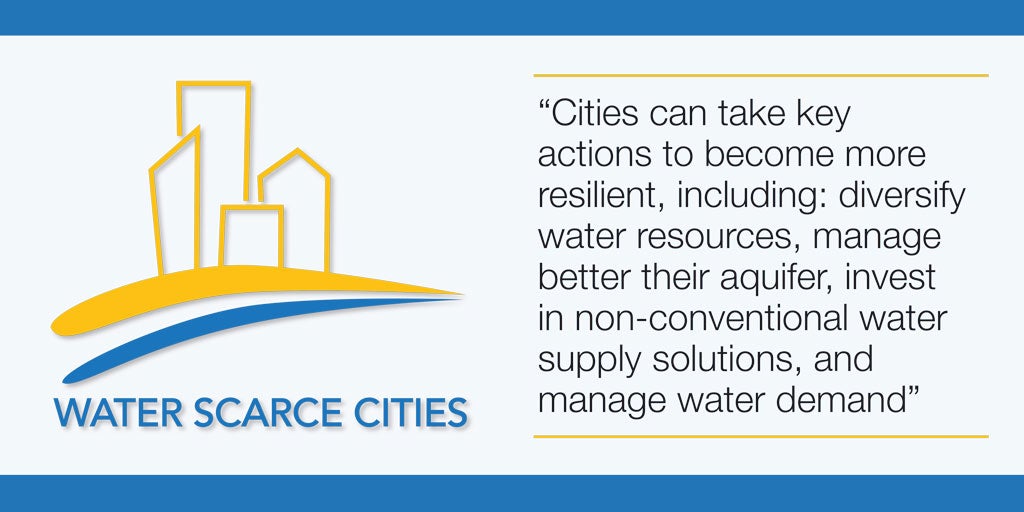 Challenges still remain high for Marrakech, as climate change has started to affect surface water availability, increasing competition for water resources with other users including farmers; low groundwater quantity and quality also remain a concern. Marrakech, in partnership with the World Bank and with support from the Water Partnership Program, is looking at options to diversify its water sources by adopting non-conventional solutions, such as stormwater capture, and studying the possibility of enhancing groundwater management by artificially recharging the aquifer with stormwater or possibly treated wastewater. Furthermore, the River Basin authorities are also working on a participatory groundwater management contract, with the potential to help improve groundwater management in the long-term.

The World Bank is undertaking the Water Scarce Cities Initiative, which aims to promote best practices approaches to urban water security and resilience in a context of water scarcity. Marrakech is one of the examples we are looking at, which highlights four of the key actions cities can take to become more resilient: diversify water resources, manage better their aquifer, invest in non-conventional solutions, and manage water demand.

Learn more about the Water Scarce Initiative here and about the Marrakech case study here. Sustainable Water Resources Management is an initiative applicable to all water uses.

There are also sustainable water resources that are unconventional called Atmospheric Water Generated out of air actively or passively, FYI.

Very interesting case. A discussion on pricing as a means to manage water demand would be welcome. High end tourism can probably afford to pay he long-run marginal cost of water.