Since 2015, when armed conflict began, Yemen's water and sanitation infrastructure has suffered significant damages. Direct attacks on the infrastructure have been exacerbated by the lack of energy (electricity and fuel), spare parts, operation and maintenance funds, and three years of unpaid salaries of civil servant staff. This confluence of factors has undermined the robustness of water and sanitation systems in Yemen and contributed to the worst cholera outbreak in history. According to the World Health Organization, as of November 11, 2018, 1,300,495 suspected cholera cases and 2,609 deaths have been reported.

The upsurge of cholera cases is attributed to several risk factors, including a disruption of basic water and sanitation services, contaminated water sources in affected communities, an inability to treat sewage due to non-functional wastewater treatment plants, and the absence of garbage collection systems. More than 70 percent of the population (22 million people) requires assistance to access safe drinking water and sanitation. Basic water supply, sanitation and hygiene (WASH) infrastructure is on the verge of total collapse, and many internally displaced persons (IDPs) are at a particularly high risk, due to overcrowded shelters and settlements with inadequate water and sanitation facilities. 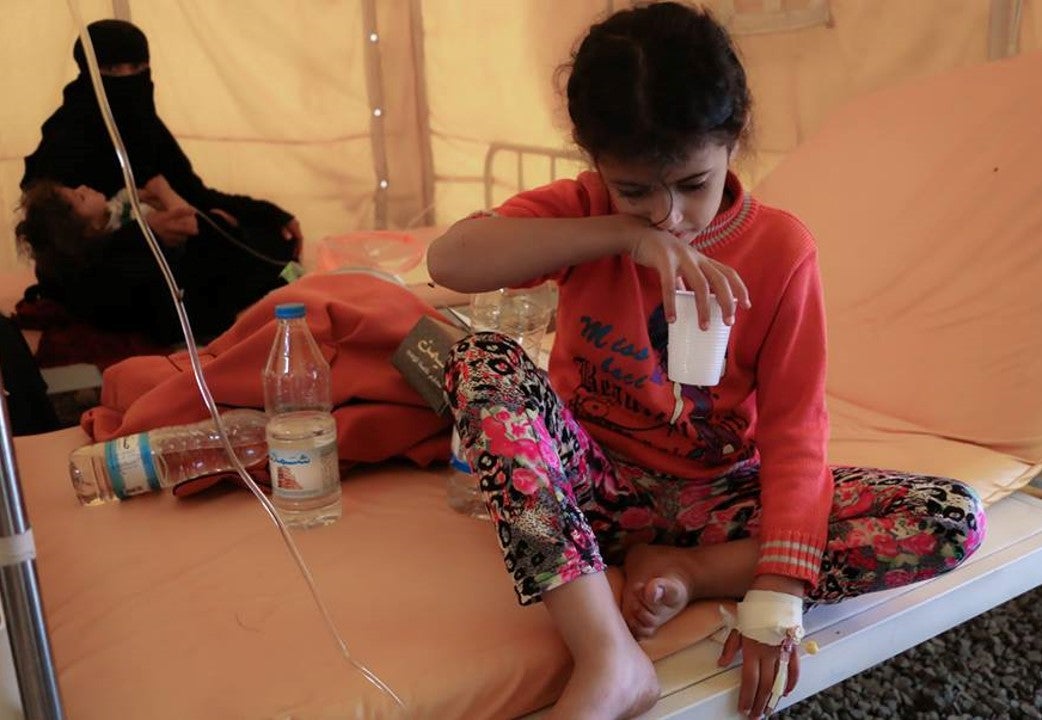 The highest numbers of cholera cases have been reported in places where wastewater treatment plants are non-functional. Without working wastewater treatment plants, raw sewage is often diverted to poor neighborhoods and agricultural lands. This, in turn, leads to contamination of the shallow aquifers and wells, where local civilians and private tankers collect drinking water. Private suppliers who use unregulated sources and transportation mechanisms to distribute water are reported to be a major source of contaminated water in the country. In addition, a recent World Bank study shows that prices charged by private tankers are several times higher than those charged by municipal services, making clean water less affordable to the poor.

Amid the deepening crisis, there are unprecedented rates of malnutrition. Every ten minutes a child dies of preventable causes in Yemen. The health condition of the vulnerable population -- particularly malnourished children -- is already compromised by the deteriorating situation, increasing their susceptibility to cholera infection, associated complications, and death.

To ensure a comprehensive, appropriate and timely response to the prevailing cholera outbreak, an integrated package of appropriate health, water and sanitation interventions has been designed and funded by the Bank through an IDA grant of $200 million – The Yemen Emergency Health and Nutrition Project Second Additional Financing was approved in August 2017 under the umbrella of the Emergency Health and Nutrition Project in Yemen.

Despite all the challenges on the ground, key results have been achieved. Within just a few months of implementation, the project provided improved water services in cholera-affected areas to 1.6 million people.  Together with UNICEF and WHO which are implementing project activities on the ground, we’ve rehabilitated water and sanitation facilities in health centers, schools and communal gathering places.  Water treatment has been provided through bulk chlorination of water sources, piped networks and private water trucks, in addition to disinfection of water at the household level.  Hygiene kits have also been distributed to schools and homes, and in cholera-affected areas, 1.85 million people have been provided with improved access to sanitation.

In areas where local water corporations remain constrained, the project took an innovative approach in recognizing the role of private water tankers to fill the gap working with the National Water Resources Authorities to monitor water quality (NWRA). To regulate the private tankers and ensure some control of the water supplied to households, the project began an official registration process, managed by UNICEF.  So far, about 4,000 private tankers have been registered. The National Water Resources Authority (NWRA) is providing quality control at wells and along the distribution chain, with sanctions imposed on non-complying tankers.

The integrated nature of this project necessitated significant collaboration with multiple stakeholders, including partnering with UNICEF and WHO to implement the activities.  The World Bank team provided training to the staff of international and national partners implementing the project on Bank safeguards policies. The Bank continues to support the agencies to ensure that they have adequate resources in place to apply safeguard policies. To ensure smooth and effective coordination, we also formed a Technical Working Group involving all the partners and meet regularly to ensure best use of funds and avoid any duplication of activities

It was the first time that the Bank was supporting WASH interventions in a situation of ongoing conflict. The project is also an important step by the Bank to continue operations despite an ongoing conflict, thus ensuring a continued water portfolio in Yemen. Given the massive needs, a new water operation is currently under preparation to rehabilitate damaged water and wastewater assets in Yemen, continue building the capacity of local authorities and protect wells and water sources to ensure the sustainability of water resources.
Topics
Fragility Conflict and Violence
Disaster Risk Management
Education
Health
Water
Countries
Yemen
Regions
Middle East and North Africa Years ago I was part of the World Bank/WHO team carrying out a sector survey in the Philippines. I was told by a Ministry of Health worker in Cebu that they had found that by far the quickest, cheapest and most effective way to cope with the threat of cholera was to use a radio spot to teach people to add a small amount of household bleach to their drinking water. The appalling conditions in Yemen are orders of magnitude worse than in the Philippines, but perhaps this approach might be applicable in some areas.

You might also google SODIS (developed back in the 80s when the Program was working closely with Roland Schertenleib at IRCWD): use soda bottles, sunlight and time to disinfect clean(ish) water. Since cholera is a high-infective-dose disease, contaminated water can be tolerated for hygiene, but, for the smaller amounts used for drinking, low-technology treatment can be a life-saver.

World bank has indeed offered great intervention to people of Yemen.We pray that conflict would end as soon as possible