Hubs in Africa: Realize your dreams

Africa is the future and the future is African. More than a thought, this highlights Africa's tremendous potential to advance its development.  With the youngest population globally, African people will represent one-fifth of the world population by 2030. This population represents both a tremendous human capital stock and a large consumer market.

Africa is attracting more and more investment, not least due to particularly high returns–yet also a higher risk. Leveraging the continent's large and young population with technology, improvements in infrastructure, health, and education, Africa could be the next economic growth powerhouse.  To do this, agglomeration of economic activity will be an important factor, as shown in the World Bank’s 2009 World Development Report on Economic Geography. A competitive private sector, enabled by effective regulation and adequate infrastructure, will be instrumental to drive integration into global supply and value chains – and ultimately achieve agglomeration.

As a consequence, “Hubs” will likely emerge in various industries, manufacturing, services and other sectors. Governments are eager to support the establishment of “Hubs” to spur investments and create more and better jobs.

But what can Governments do? Here are some ideas from past experiences:

There are plenty of examples where “Hubs” have turned “small” nations into regional or global business centers.  Hong Kong, China, and Singapore are among the most well-known examples. Hong Kong reflects what is called a “Global Hub”. Indeed, in addition to hosting one of the world’s busiest container ports and airport, Hong Kong is also a leading financial service sector and digital economy services “Hub”. Singapore, much like Hong Kong, is “Hub” of many – a trade, financial, logistics and airport hub. Singapore has become one of the world’s top centers of commerce and moved from “slums to world city” status in about four decades (World Bank, 2009). On the journey to becoming “Hubs”, the two cities have relied on several factors, such as location, language, strong institutions, and world class infrastructure. But there is a key difference in the policy choice to achieve the outcome: Singapore’s policymakers have strongly supported the development of their territory as a “Hub” through direct government interventions in infrastructure and the provision of financing;  while the emergence of Hong Kong as a “Hub” is much more the product of private sector-led initiatives that emerged on a foundation of sound regulation. In both models, the private sector's voice in policy decisions was essential to ensure feedback loops for the continuous improvement of any “Hub”.

The creation of “Hubs” builds on both theoretical and practical foundations. Theoretically, the emergence of “Hubs” hinges on the concepts of economic geography and gravity trade models. These theoretical frameworks are described, for instance, in work from Fujita, Krugman, and Venables and Porter. While the former focuses on increasing returns from positive externalities due to agglomerations in a borderless world with trade costs, the latter highlights the critical roles of qualitative variables such as robust institutional frameworks and knowledge spillovers in building the comparative advantages in “Hub” locations. In practice, two critical elements need to come together for a “Hub” to be created – market access (demand) and production capabilities (supply) for goods and services. The former refers to the ability to bring goods and services to markets. The latter refers to an economy's capability to produce those marketable goods and services. Market access is driven by location, connectivity and logistics capabilities, and advantages stemming from trade policy choices. However, ultimately, the success of a “Hub” will depend on that of the private sector. As the examples from Hong Kong, and Singapore show, it is the private sector success that will determine the success of any “Hub”.

Figure: Elements that need to come together for the creation of a hub 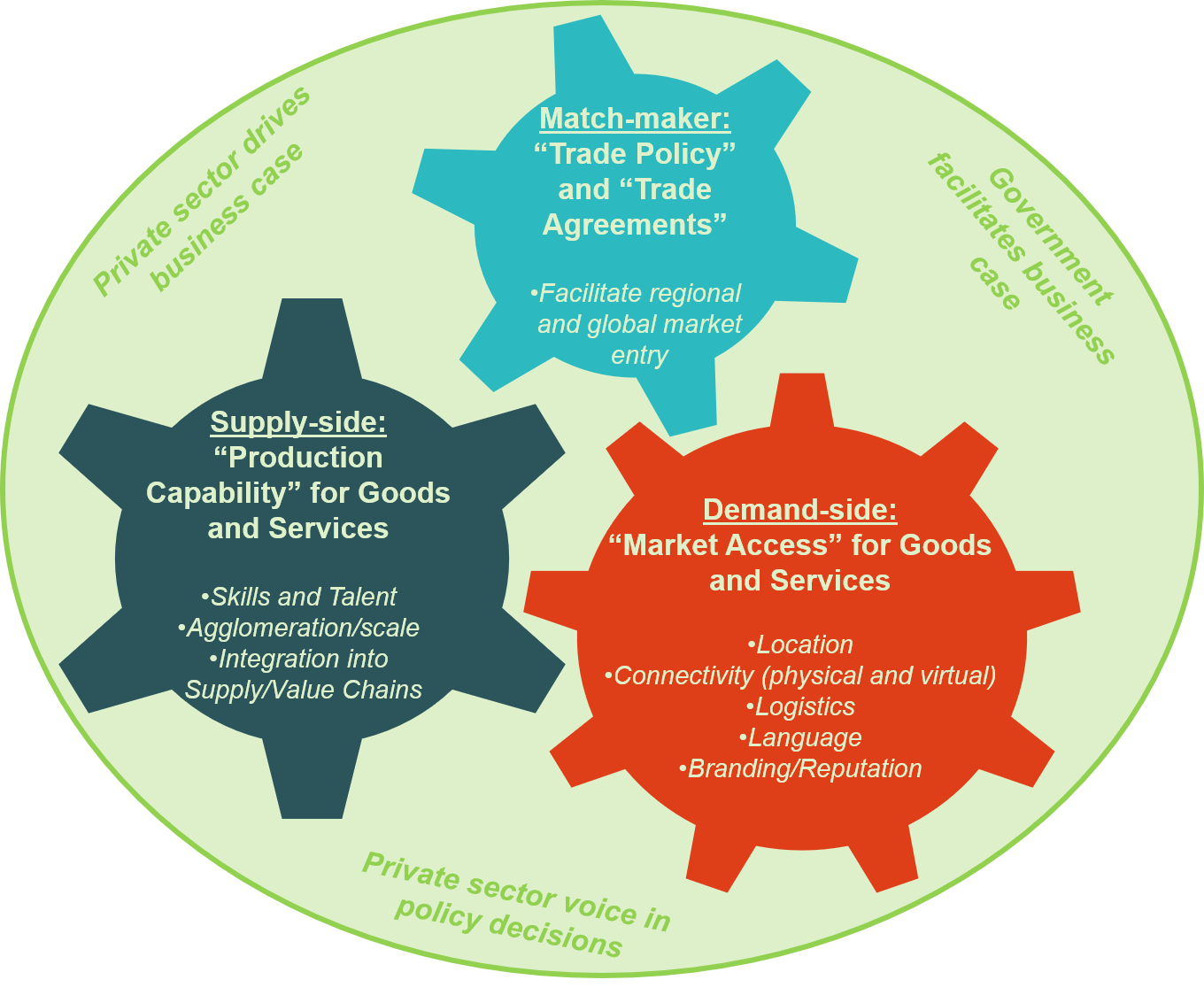 What African Governments can do to facilitate the creation of “Hubs”

To help private businesses agglomerate and form clusters that can become “Hubs”, African Government should: