When you are overtaken by yet-another reckless Matatu driver you may have sympathy for Lee Kuan Yew, Singapore’s long-time autocrat, who is credited with Singapore’s transformation from third world to first world. He once famously claimed: “Developing countries need discipline more than democracy.”

As Kenya has entered another election year, debates on the achievements of its democracy are likely to increase. A functioning democracy needs more than elections, but even the management of elections has proven difficult for Kenya in the past, which partly explains why the economic performance has often been weak in election years and beyond. If Kenya was to repeat past experiences, the country would risk returning to a low-growth cycle for the next 24 months. The dream of reaching Middle Income this decade—by the more modest World Bank definition of US$ 1000 per person—would then become all but elusive.

The World Bank’s most recent Kenya Economic Update has reviewed Kenya’s economic performance during elections over the last 30 years. This period covers six elections, four of which were held before the multi-party system was introduced.  Since 1980, Kenya’s economy grew by an average of 3.4 percent.  However, in election years, the average growth rate was only 2.4 percent, and growth was even below 2 percent in four of the election years. Equally challenging has been the management of post-election dynamics. Kenya achieved a modest 2.7 percent in post-election years, and three of the last six elections were followed by low-growth, especially in 2008, when post-election violence disrupted the country’s achievements of previous years. Without the disruptions during election years, Kenya would have grown at a respectable 3.9 percent (see figure).

Figure: Kenya’s growth is lower in election and post-election years 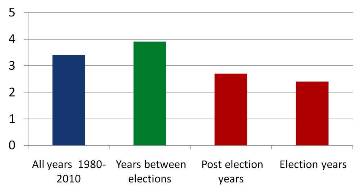 Why is Kenya’s growth performance substantially lower during election years? Low growth during election years and thereafter was not always driven by disruptive elections. In several cases, electoral instability was compounded by natural disasters, such as the 1983 and 1992 droughts, or the 1997/98 El Nino floods. However, the conduct of several elections has shocked the economy—often hard enough to affect development prospects beyond the election year. After the 2008 post-election violence, farmers were unable to plant, tourists rerouted their vacations to other destinations, companies held back their investments, and households reduced their consumption.

Some people may wish that Kenya adopts authoritarian leadership, rather than have a messy democracy. In Kenya, there is indeed a big need for discipline. If citizens and leaders would implement the rules that have been set-out and the promises made, Kenya would be a very different country today. But those arguing for authoritarian rule should be reminded that the track record of Africa’s authoritarian rulers has been dismal, including in Kenya. The “benevolent dictator” remains the exception, and even if there is a good chance to get one, there are limits to what authoritarian regimes can achieve. They can help in catching up, but are typically an impediment to innovation-based growth, which is needed to sustain high levels of development. For catching-up one needs focus, determination, and discipline. For sustaining high-growth, countries also need creativity, and often need to deconstruct their economies before reconstructing. Authoritarian rule would risk killing creative industries which have become a new force of Kenya’s economy.

It seems that most Kenyans treasure their democracy as demonstrated in the high participation at referendum and clear endorsement of the new constitution in 2010. There are also positive exceptions such as the year 2007, when the country was riding on the growth momentum of stable macroeconomic policies and the Economic Recovery Strategy, achieving 7 percent growth, the highest in Kenya’s recent history. In other countries, elections have also helped to spur growth because governments try to make a last effort to look good before the electorate, especially in advancing infrastructure projects and expanding social assistance.

Those who wish for an authoritarian ruler may want to think twice. The likelihood that Kenya would be ruled by a poor performer is probably higher than the emergence of a new Lee Kuan Yew. Kenya would then have neither democracy nor discipline. There are also countries which combine democracy with discipline. Why shouldn’t Kenya be one of them? It is Plato who decreed,''the price good people pay for not getting involved in public affairs is being ruled by evil men and he further added that one of the penalties of refusing to participate in politics is being ruled by their inferiors.

I quote that to make it clear that the ''involvement'' and ''participation'' envisaged here IMO is the democracy Kenya is currently cultivating(post nyayo) and when you look at it, generally, a thriving liberal market economy is hinged on this democracy - so democracy is imperative for Kenya's economic development.

The strongest platform on which discipline (subjective as it is) will be anchored is the New Constitution which already has started to show signs of fruition - and this is a death knell to those remnants who would like authoritarianism which an expanded democratic space governed by the rule of law shall definitely propel Kenya's Economy to where it is visioned to be...discipline is needed but democracy is paramount - ama?

many thanks for a very thoughtful contribution.

Good topic, however, I feel that this is a no brainer. Democracy or the semblance of a credible system of citizen participation in their political system is key to development. What Kenya is going through is growing pains, which have, admittedly lasted longer than some of our peer nations, eg South Korea. After Democracy, what we now need is strong civil society that will operate freely and educate the population on importance of voting for candidates who have a strong growth record and not a cult of personality.

The bad political culture is the main problem. For far too long, political power (in Kenya) has been more of a means to enrich the power-holders (and a few of their cronies) than a tool to serve the country and its people. I guess it is the same in many other countries, but not in the same degree and intensity as it is in Kenya. Unfortunately, much this poor culture started almost immediately after independence, and we are yet to get rid of this mindset. The idea of a benevolent dictator would therefore be even more disastrous for Kenya if this mindset remains unchanged.

IMO, if Kenya can successfully get rid of this culture, it would not matter whether we are under a democracy or a benevolent autocrat, greater economic growth would be possible. Consider the Kibaki presidency for example (despite his controversial re-election in 2007). Much as he is a laid-back leader in many ways, he has helped Kenya make several economic gains in the past few years. His focus on the macro-economic aspects have laid a good foundation for more growth (even at the microeconomic level) in the near future. He seems not to have focused too much on self-enrichment, even though a few people around him may have tried (and probably succeeded in a way) to benefit individually from his presidency.

Hopefully, with a new constitutional dispensation, the bad culture will die a slow death and eventually, elections will not be a make-or-break moment for Kenya.