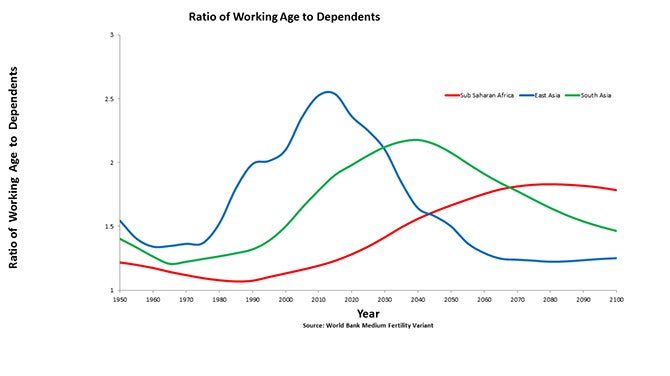 Based on new data and research, there is reason for optimism about Africa’s demography and development. Population growth rates may continue to be high for some more time, but some underlying signals of approaching widespread fertility declines indicate change is in the offing. And, along with incipient changes in the economy, there is reason to expect Africa to be on an upswing. Growing up in Calcutta, we were brought up on Rabindranath Tagore’s magisterial Bengali poem, Africa, in which, referring to the forces of colonialism, the poet talked about how this continent full of potential is repressed by “civilization’s barbaric greed.” The time has now come for Africa to seize the moment.

Africa's Demographic Transition: Planning for the Future of Africa's Youth

The flagship publication, “Africa’s Demographic Transition: Dividend or Disaster?” highlights the main signals of change relating to the known pre-conditions for fertility decline that have been demonstrated empirically to be important in other parts of the world. These include economic development, decline in infant and child mortality, sudden temporary rise in fertility, and the easier availability of modern contraception. All these factors seem to be making their presence felt in many parts of the continent in the last 15 years or so. Child mortality has shown remarkable declines in country after country (although there is admittedly some distance to go, especially in Middle and Western Africa). 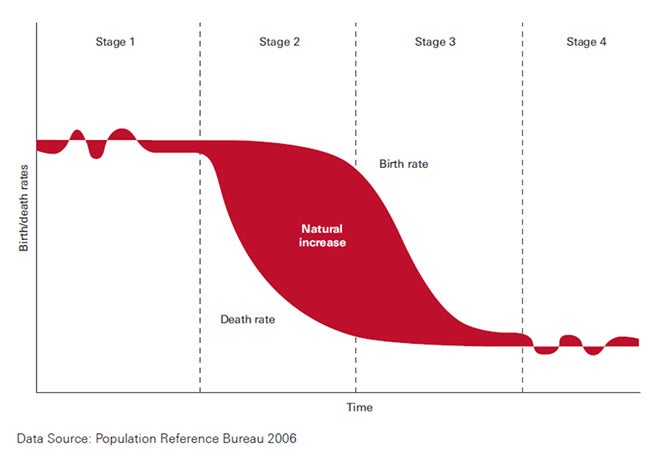 On fertility, the situation looks more optimistic once one disaggregates the population. Interestingly, several sub-groups have in fact experienced a rise in fertility. Such a rise is usually an outcome of rises in ‘natural fertility’ rather than a rise in the demand for children and is partly an outcome of the kind of modernization that leads to a reduction in traditional, fertility-suppressing behaviors, like breastfeeding and post-partum abstinence, and that eventually leads to an active demand for and achievement of lower fertility.

There is also the question of timing. Having begun later than in other parts of the world, fertility decline in Africa has the benefit of hindsight. But in the 1980s and 1990s this hindsight was not used because of a global retreat from family planning programs. Since the beginning of the 21st century there has been renewed international effort to provide more and better contraceptive services and implement more effective programs. Recent rises in contraceptive prevalence rates in many countries (especially in countries like Ethiopia and Rwanda) testify to the effectiveness of such strategizing.

These factors will hasten fertility declines in Africa and thus reduce dependency ratios. In addition, such policies will also be aided by the cultural fact that many parts of Africa (especially Eastern and sub-Saharan) have a long tradition of women participating in the labor force, unlike the situation in many parts of Asia and South America. This means that once reduced childbearing frees up women to participate more actively in the workforce, if their skills and work opportunities can be enriched, the demographic dividend could be realized even more sharply than happened in other parts of the world. Great research that every African who can read should look at. A few decades ago, concern over Asian population sizes (India and China in particular) was a topic at most development discussions. Sound economic policies in these economies are lifting millions out of poverty and the challenge for us in Africa is to tackle the policy deficit and figure out how this demographic youth bulge can drive economic growth. I look forward to reading this seminar report.

Been put on this part where I think Africa wide lately. I just know it's not enough to only thin of your country. We all need to rise above where we are. Though my area of thought is in Film Making I know that these factors like our Demographic and others... play a vital role in our progress. Thanks alot. I will keep following with these posts to stay informed and up to date.

I totally agree if childbearing frees up women to participate more actively in the workforce, if their skills and work opportunities can be enriched, the demographic dividend could be realized even more sharply than happened in other parts of the world.
Kenya Mangoes

Brief but useful article. While talking aid and development we tend to look to the US and Western Europe and forget that south-south links (viz. the reference to Rabindranath's poem on Africa) and interactions have existed long before the emergence of either the US or Western Europe. The development of Africa could be achieved with a fraction of the effort now being undertaken, if some of the south-south interactions could be revived.
Further Africa needs to be accepted for what it is without always being compared with the 'developed' countries. I do not understand why Africa is considered poor. Any entity where all established cultural and societal norms have been uprooted will go through a tough time. That is where Africa is now. It needs to be given time and it needs to be allowed to chart its own course. Africa is already doing well and will do much better.