Remember Ebola’s orphans, but don’t forget all the other affected children 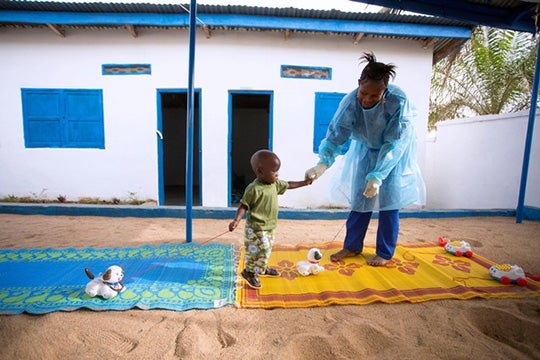 Much of the media coverage of children during West Africa’s Ebola epidemic has been focused on orphans. Repeatedly, we have read heartbreaking stories of children who have lost parents to the disease and even been rejected by their communities. These children deserve our attention: We know that losing a parent has both short-term and long-term impacts. Evidence from Kenya, South Africa, Tanzania, and across Africa demonstrates significant reductions in educational outcomes for orphans in the short run. Evidence from Tanzania shows that adverse education and health effects persist into adulthood.

But just how many of these orphans are there likely to be? News stories have varied dramatically in their estimates, from 500 to 25,000 reported over the course of just one month. The most recent estimates from UNICEF suggest that 16,600 children under age 18 have lost either a parent or a primary caregiver. In a new letter in the Lancet and a more detailed working paper, we combine available data on the gender and age distribution of cases and mortality from Ebola (from the WHO), the number of living children for adults (from Demographic & Health Surveys, or DHS), and data from a previous Ebola outbreak on the probability of infection for spouses and children of Ebola patients to infer the number of children orphaned to date by Ebola in the three most affected countries. Using this method, we estimate that across Guinea, Liberia, and Sierra Leone more than 9,600 children under age 15 – the most vulnerable of children – would have lost one or both parents to Ebola and that about 600 of those would be double orphans.

Almost 10,000 orphans is a lot of bereaved children. We then combine those results with DHS and population data on the total number of orphans (for non-Ebola causes, such as accidents and other diseases) to see whether these numbers are likely to overwhelm extended family networks, the traditional care provider to orphans in the region. What we find is that about 8% of total under-15 children were orphans before Ebola came along. The Ebola orphans increase that to about 8.1%. (If one did the same calculation with the higher UNICEF orphan numbers, the total would be 8.2%.) Cross-country evidence suggests that extended families around Africa have absorbed much larger increases in orphans. Indeed, the most recent UNICEF report suggests that less than 3% of Ebola orphans have been placed outside of their communities. Despite being placed, these children will continue to need support so that they can enjoy fruitful, happy lives despite the grief of lost parents.

Despite the needed attention to orphaned children, let’s not forget the 8.8 million other children under 15 in Guinea, Liberia, and Sierra Leone. Evidence from across Africa suggests that the gap between orphan and non-orphan is actually dwarfed by the gap between richer and poorer children. The World Bank’s most recent estimates of the economic impact of the epidemic in the three most affected countries indicate that the epidemic is creating far more poor children. Suggestive evidence from phone surveys in Liberia and Sierra Leone suggests that many households are eating fewer meals or smaller meals due to either price increases or reduced income. Schools have been closed for several months in all three countries (and have recently re-opened in Liberia and Guinea). These impacts have potential long-term consequences for children across the countries, not just those who have lost a parent.

So plan to provide support for those orphans. But also plan to help the children of Guinea, Liberia, and Sierra Leone more broadly to recover from what is both a health and an economic emergency.
Topics
Health
Education
Countries
Guinea
Kenya
Liberia
Sierra Leone
South Africa
Tanzania
Regions
Africa
Series
Pandemic Preparedness What are the forms of support receivable, and how do I send the support?

Great recommendation. Concentrating on orphans alone like most CSOs have done with HIV/AIDS in Africa has bred an imbalance in conceptualization of child welfare. In the circumstances thereof, broad programs to support children are the answer to post crisis interventions. For over 15 years working in Uganda in child support programs, I have evidence that this approach works and causes social economic development. In my view, there should be holistic interventions that address children's needs at the community level. Engaging the available care givers and or institutions could contribute to impactful results. Thanks for the article.

To please pay more and serious attention to these Orphaned children for their well being in all areas like education, health, food etc in giving support to Local Community Bodies/Associations in these Communities. Also in developing Youths Organizations in these Communities as to get involved them in Social, education, health etc Activities. With these programms it will help the Sociaties, and the Country Sierra Leone to develop at the same time. That is to invest in the Youths for any future development for they are the future Leaders.