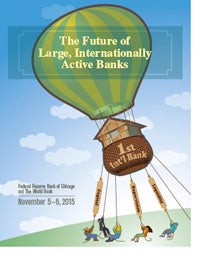 On November 5–6, the Federal Reserve Bank of Chicago hosted its annual International Banking Conference, which we at the Bank co-sponsored. This year’s topic “The Future of Large, Internationally Active Banks,” which we picked to correspond to the topic of our upcoming Global Financial Development Report (GFDR) is very timely and important given that regulatory reforms addressing large, international banks, which will affect the economies around the world, are still ongoing. For example, just a few days after the conference, on November 9, the Financial Stability Board (FSB) issued its final Total Loss-Absorbing Capacity (TLAC) standards, which is expected to make banking systems more resilient by addressing the too-big-to-fail issue and was one of the issues hotly debated throughout the conference.

The presentations at the conference provided crucial insights for our 2016 GFDR on “Global Banking”. The diverse list of participants from various institutions, such as central banks, regulatory/supervisory institutions, universities, private and public institutions, enabled plenty of interaction and intriguing discussions in the Q&A sections.

Many speakers at the conference emphasized the importance of international banks for developing countries. The discussions suggest that the developing country experiences during and after Global Financial Crisis were varied among regions and there is a lot to be learned from previous experiences. For instance, ECA region, in which foreign ownership of banks was pervasive, was hit hard by the contraction of foreign banks — whose parent banks were in distress — during the crisis period. Yet, there is also some evidence showing that such negative transmission was mitigated by cross-border initiatives such as Vienna Initiative. Furthermore, some regions (e.g. Asia) avoided suffering from an imported banking crisis in the 2007–2009 period — mostly thanks to rather lower foreign ownership in those regions and their experiences from the Asian crisis in late 90s. One important observation, however, was that non-OECD banks — mostly from same regions with host countries- substituted contracting OECD banks (Figure 1). The globalization trend in banking seems to turn into regionalization in the post-crisis period (Figure 2). The consequences (and the persistency) of this change for the global financial system is still to be seen. 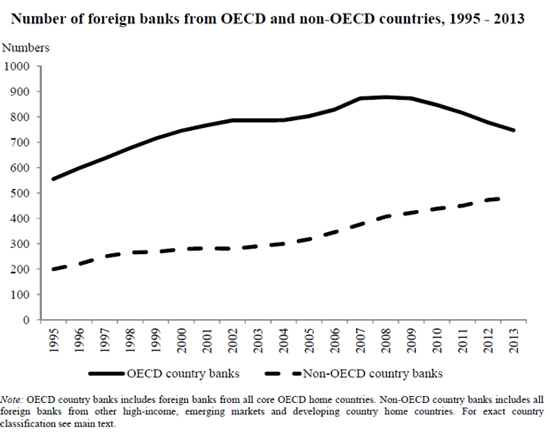 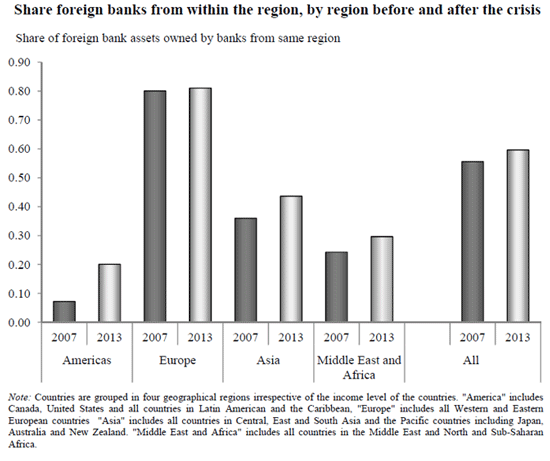 The sessions of the 2-day conference dealt with a wide range of issues concerning large, internationally active banks and their role in the global financial system. The first day started with sessions on the cross-border banking landscape and the trends in banking activity after the global financial crisis, which included discussions on the organizational complexity of large global banks, the role of size in determination of success for those banks, and the trends in cross-border banking and its interaction with public entities through sovereign debt and direct lending. The second day included sessions on risk management, safety net and resolution issues and corporate governance in large and cross-border banks.

Both days were concluded with sessions on policy, where implications for supervision and regulation and the future of large, internationally active banks were discussed. The highlights of these discussions were the contrast between US and European global banks regarding their deleveraging — US banks were much faster compared to their European counterparts-, the emergence of market funding and competition from newly flourishing fintech industry at the expense of banking activities (i.e. financial disintermediation) in the post-crisis period. Finally, many presenters argued that ongoing regulatory reform agenda (leading to higher capitalization or so-called loss absorbing capacity) and efforts by policy makers (there is a lot of cross-border coordination among regulators compared to pre-crisis period) completely changed the banking system, making it much safer and resilient. Yet, there were also speakers arguing there is still scope for change. For example, some speakers called for better capitalization through higher leverage ratios as risk-weighted capital can be manipulated. Given the previous failures in cross-border coordination and the non-binding nature of the post-crisis coordination efforts, these discussions will probably continue until the new regulatory regime is tested in future events. We look forward to addressing many of these questions in the upcoming GFDR.  Stay tuned for more.