Also available in: Español
As Morocco hosts the next global climate change meeting in November 2016, the world looks to the Middle East and North Africa region for leadership in the fight against climate change 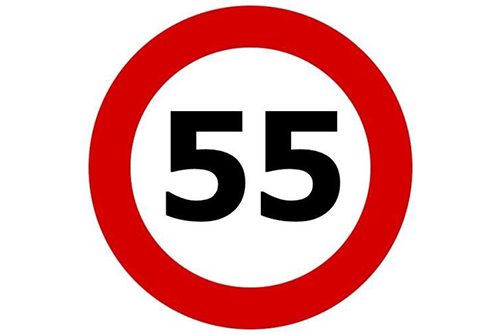 We are not there yet. Currently we stand at 22 parties for the first goal, and at 1% on the second goal , (For a real-time monitoring tool of the ratifications, consult WRI). The 22 champions in the international community that have already ratified the Paris Agreement are Barbados, Belize, Cameroon, Fiji, Grenada, Guyana, Maldives, Marshall Islands, Mauritius, Nauru, North Korea, Norway, Palau, Palestine, Peru, Saint Kitts and Nevis, Saint Lucia, Saint Vincent and Grenadines, Samoa, Seychelles, Somalia, and Tuvalu.

But the gap is closing. Aside from the 22 parties that officially ratified the Paris Agreement, most countries have indicated their intention to ratify the Paris Agreement . Most importantly, the three major emitters: China, the EU and the US have indicated their intent to join the Agreement. This would result in 51 countries accounting for about 51 percent of global emissions. With these contributions, we are roughly 4 countries and 4 percentage points short of the goals, in order for the Paris agreement to take full effect.

MENA can be a deciding factor. In our previous blog post, we showed that the 19 countries in the MENA region together emit about 7% of global emissions , which would allow us to pass both 55-yardstick lines. In fact, it would only take the Gulf States, which are also the largest emitters in the region. 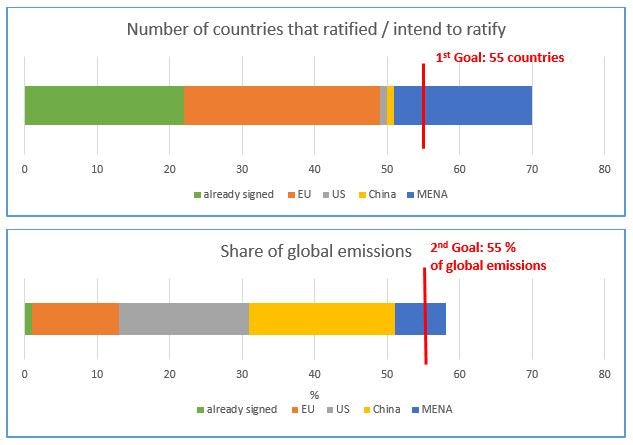 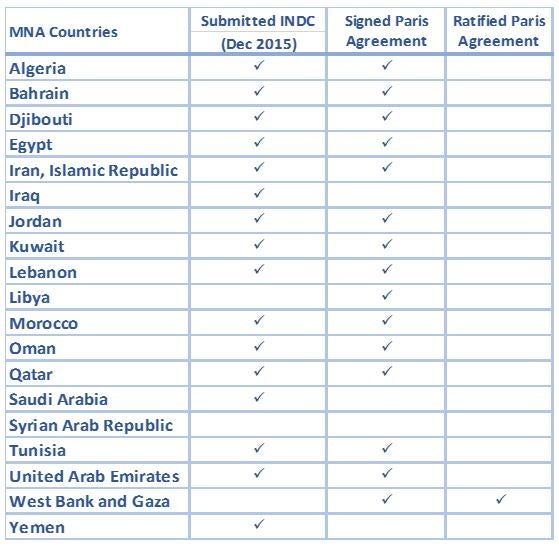 The world looks to MENA as Morocco hosts the COP22 in November. As the world looks to the region for the next COP, MENA can seize the opportunity and lead the world into a Paris Agreement era , locking the world into temperature increases of no more than 2.7 °C by 2100, which would result in about 1 °C less than if no action would be taken. This is a crucial step in the right direction. As shown in the above graphs, it is in the hands of MENA to allow the global community to take this first step.

Where does MENA stand today? All MENA countries, expect Libya, have submitted an INDC at COP21. Subsequently, most countries, except Iraq, Saudi Arabia, Syria and Yemen, signed the Paris Agreement  in New York in April 2016. The only one to have ratified the agreement so far is Palestine .

Despite the security situation, MENA can make a difference . Given the current security and humanitarian challenges in Syria, Iraq and Yemen, it is understandable that they are behind the curve concerning global action against climate change. The cumulative emissions of these three war-torn countries however amount to only 0.7 percent of global emissions, which means that even if they would not sign the Paris Agreement, both goals can still be met if the remainder of the MENA region comes together and pulls its weight. 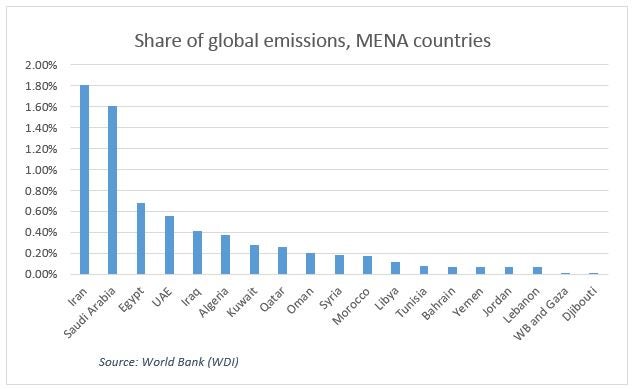 While many different country combinations would allow the 55 goals to be surpassed, hosting the COP22 this year puts the ball squarely in MENA's court. And as we showed, if the three main global emitters hold to their promise, all it would take is MENA to make a legally binding Paris Agreement a reality.  In fact, a few of the major MENA emitters would suffice.
Topics
Climate Change
Countries
Algeria
Bahrain
Djibouti
Egypt
Iran
Iraq
Jordan
Kuwait
Lebanon
Libya
Morocco
Oman
Qatar
Saudi Arabia
Syrian Arab Republic
Tunisia
United Arab Emirates
West Bank and Gaza
Yemen
Regions
Middle East and North Africa