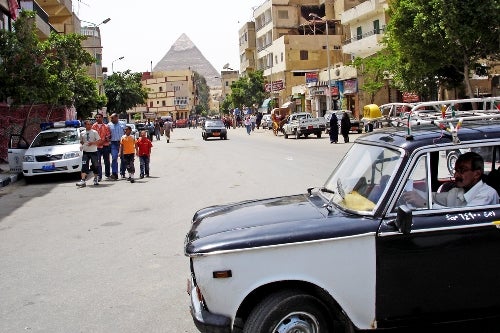 Some of you may recall my colleague Holly Krambeck’s blogging about the Egypt Vehicle Scrapping and Recycling Project, or VSRP, as it is affectionately also known. Holly’s old posts are here and here. The project would ambitiously modernize public transportation fleets in Egypt, starting with the taxi fleet of Cairo, and expand to include other modes of public transport too, including minibuses and buses. Financing for this change was to draw on carbon finance as an additional revenue stream for the government’s program, which included discounts on the purchase price of new vehicles, cash vouchers for turning in old vehicles and easier access to credit.

That was back in 2010, when the project had not yet been officially registered as a Clean Development Mechanism (CDM) Programme of Activities. The project was registered on May 11, 2011 with the United Nations Framework Convention on Climate Change (UNFCCC) secretariat, allowing it to technically start generating emissions reductions based on a methodology for calculating emission reductions by low-greenhouse gas emitting vehicles (AMS-III.C. version 11).

The goals were certainly ambitious, and in the first year and a half of the project, 30,000 taxis were replaced, some of them 50 years old. This pace put a strain on the project, as old cars were piling high in the scrap yard along the Alexandria Desert Road waiting for further processing. In the following two years, 11,000 taxis joined the program. That is some 40,000 taxis, or half of the taxis in Cairo. Pretty impressive!

Once these taxis were included in the project, the team at the Ministry of Finance started collecting data to claim the emission reductions achieved. The process is fairly straightforward with an annual survey on the distance traveled by the new taxis and multiplied by the amount of petrol or compressed natural gas (CNG) consumed to obtain the total GHG emissions. This result is then compared with the assumed emissions for the fleet comprising of the older stock of taxis to obtain the emission reductions. Some adjustments are made to take into account, e.g. the different makes and models of vehicles in the program.

After the project was registered, it became evident that some important data from all 27 Governorates needed to finalize calculations was not readily attainable. It took until well into 2014 for the data to be compiled. Moreover, even though the program was registered in 2011, it was not until April and May of 2013 for the individual sub-projects to be included into the overall program. Thus, it was decided for all emission reductions achieved in 2013 and 2014 to be verified together and now, on September 21, 2016 the Executive Board of the CDM authorized the issuance of 146,005 Certified Emission Reductions (CERs).

The Emission Reductions for year 2015 are already in the process of being verified and, hopefully, the program can grow as originally planned to include more Governorates, more modes of transport and –making use of the updated version of the methodology attached to the project—perhaps to include hybrid and electric vehicles someday as well.  After all, the program is operational until 2039 and a lot can happen in the years ahead.
Topics
Climate Change
Environment
Transport
Countries
Egypt
Regions
Middle East and North Africa