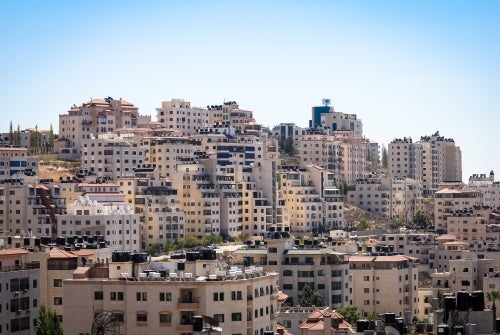 Cities expand in the blink of an eye, and with such rapid growth come corresponding issues. This is immediately apparent when you drive through a Palestinian city and observe the severe traffic problems. While such gridlock may be inconvenient for a person caught in it, it can be a severely damaging for many small business owners, whose shops become inaccessible due to the traffic build-up. Among the main contributing factors to this situation are the weak, under-capacitated urban planning practices in Palestine.

Palestine is now 74% urban. Over the last 10-15 years, urban sprawl has resulted in extended built-up spaces connecting cities, refugee camps, towns, and villages into wide-spread urban areas with indistinguishable borders. Hebron, Nablus, Bethlehem, and Ramallah have each merged with surrounding villages to form large cities with multiple jurisdictions. Often, you cannot tell where one municipality ends and another starts.

Towns and villages in Palestine each have their own identity and history dating back to Ottoman times. As a result, they are very independent in nature, and have grown accustomed to planning autonomously. Urbanization – population growth and the build up of urban areas – has made this unfeasible however, and planning practices are outdated and insufficient for the situation on the ground. The metropolitan planning policies typically found in large cities are absent in Palestine, and local authorities do not coordinate urban development with their neighbors. As a result, city areas will have multiple authorities planning, investing in, and developing shared urban spaces without strategizing with one another. This has resulted in inefficiency in city management, competition for funding resources, and duplication of investments.

There are many lost opportunities in the current way of operating. For example, solid waste collection truck routes could be coordinated among cities’ local authorities in order to allow the trucks to serve the entire city across jurisdictions. This could cut costs and collections times, increase effectiveness, and create economies of scale. Currently, each authority operates individually with trucks weaving along circuitous and inefficient collection routes rather than progressing along natural cross-jurisdictional traffic lines. In another example of poor planning and coordination, an urban area has three large-scale sports stadiums within 12 kilometers of one another, each within a separate jurisdiction. The authorities could have coordinated to build and operate a joint stadium serving the entire urban community, sharing costs, and freeing up urban land for other investments such as hospitals or public parks.

A new World Bank project, Integrated Cities and Urban Development (ICUD), is supporting five leading Palestinian urban areas – Hebron, Nablus, Bethlehem, Ramallah-Al Bireh, and Gaza City – to begin utilizing integrated metropolitan approaches. With a US$5 million grant, the local authorities of the urban areas are working together to create joint plans, policies, and activities for each corresponding city area in its entirety. This will help promote better resource management, efficiency in service delivery, and holistic urban planning, e.g. for traffic, land-use, zoning, economic development, and environmental protection. The project will use a bottom-up approach where the local authorities decide jointly which city-wide issues they want to tackle and work on together with support from the Bank. ICUD is coordinating with the local mayors and technical teams to provide the participating municipalities and villages with customized technical assistance, training and exercises, and goods, e.g. software, equipment, and spatial maps, etc. In many instances, this is the first time authorities are willing to link their development initiatives to that of their neighbors.

Activities already under discussion in the participating urban areas include: (i) a joint sewage system plan across four municipalities for one urban area; (ii) an integrated, comprehensive geographic information (GIS) system to share various types of mapped data and information across all the local authorities of one city; and (iii) cross-jurisdictional, city-wide traffic management plans.

Once the local authorities begin working together, ICUD will also support the urban areas’ plans for future spatial, social, and economic growth. This advanced, forward-thinking urban planning tool is new to Palestine, and an international firm will work with each urban area to create different city growth scenarios. The authorities in turn can analyze the impacts and costs of alternative development approaches. The ultimate outcome will be for the local authorities to jointly decide on the course of development for the next 5-20 years, and begin working on the policies, resources, and infrastructure needed for the chosen scenario.

Through the new approaches and innovative planning tools spearheaded under the project, Palestinian local authorities are aiming to improve the lives of their residents. Improved urban growth management will in turn create an environment for economic growth and increased jobs, better living conditions, and access to better services. With support from ICUD, Palestinian cities are taking their development into their own hands and planning for a more sustainable future.
Topics
Digital Development
Governance
Social Sustainability and Inclusion
Urban Development
Countries
West Bank and Gaza
Regions
Middle East and North Africa Ambitious goal, however, in absence of political well and funding it becomes hard to achieve.
Good article. Thx.