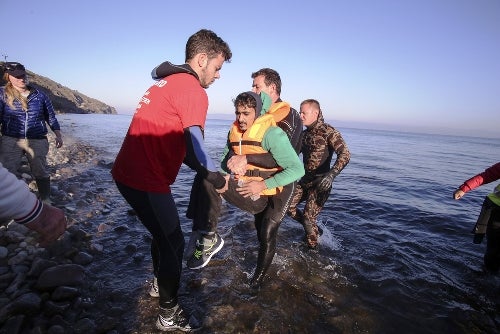 In February of this year the Syrian Center for Policy Research issued a report stating that 470,000 Syrians had been killed in the war and 1.9 million wounded. That was 10 months ago and with the intensification of the siege and bombardment of Aleppo and ongoing fighting elsewhere in the country, one can only guess at the current toll. What is clear is that each day of fighting adds to the burden that Syria will have to carry for generations to come, not only in terms of the ever mounting physical destruction but also in caring for the growing daily toll of the physically or mentally disabled that the war produces. All this at a time when half the population--nearly 5 million refugees and 6.6 million Internally Displaced Person (IDPs)--have been torn from their homes; and the country’s medical system is in tatters.

Globally, around one in seven people or approximately 15% are disabled but among Syrian refugees this number climbs to 22%  according to a 2013 Survey, higher than the 18-20% estimated for most other conflict areas. Similarly while globally it is estimated that 2-4% of the disabled experience significant difficulties in functioning, the number of those with severe impairments rises to 6% among Syrian refugees. If one were to extrapolate these survey numbers which apply to Syrian refugee populations in Jordan (640,000 registered refugees and a million Syrians overall) and Lebanon (1 million refugees) and include the nearly 2.7 million Syrian refugees in Turkey, the numbers come to slightly over 1 million disabled, of whom some 280,000 are severely impaired.

This number would tax most health care systems. It poses a huge burden for the neighboring host countries, especially Jordan and Lebanon where the refugee populations account for between 20 and 30% of the native populations. In both countries, international and local NGOs as well as humanitarian and aid agencies do try and provide support but the challenges are immense. For example, it is estimated that around 30% of Jordan’s Syrian population are either disabled or have a serious health condition. In Turkey, which provides free health care for refugees, the challenges still loom large with language barriers and cultural constraints such as some women refugees’ insistence on female doctors. In all three countries the specialized medical needs of disabled people, especially those with psychological and mental needs, remains particularly problematic.

Syria’s 6.7 million IDPs are mostly unable to have easy access to humanitarian assistance and face woefully inadequate medical services. According to the UN, the overall number of Syrians in the country who currently need assistance is 13.5 million and 4.5 million live in what are termed “hard-to-reach” areas. These are scattered in 147 locations across the country. The number of disabled people is estimated to be in the hundreds of thousands with thousands more listed as severely impaired. Every month, the UN is able to provide only 373,000 medical treatments.

There are also nearly 400,000 people within Syria who are being besieged according to the UN but Siegewatch puts the number at nearly a million with another 1.4 million under siege-like conditions or under danger of being besieged. Whatever the actual numbers, the reality is that tens of thousands of disabled Syrians live with very little or no medical attention.

Disabled women are especially vulnerable: “about a third of women with disabilities experience psychological, sexual, or physical abuse in natural disasters and conflicts, according to a 2015 report by Handicap International…Women with disabilities who are isolated in their homes are particularly at risk of sexualized violence and rape, as are girls with intellectual disabilities,” said a February 2016 report by the New York-based nonprofit Women’s Refugee Commission.”  Access to everything from bathrooms to medical care to educational and other services is also particularly difficult for women – especially given the cultural context for many Syrian refugees.

Another group of disabled with specific vulnerabilities include children, whose plight was highlighted by UNICEF’s The State of the World’s Children 2013: Children with Disabilities. The dire situation presented in the report - some 93 million children or 1 in 20 of those aged 14 or younger, living with a moderate or severe disability of some kind - has only worsened as highlighted by the wars in Libya, Iraq and Syria. Older refugees are perhaps even more vulnerable. Of the elderly Syrian refugees, 66% have an impairment, 33% of these are severe and 65% of them suffer from psychological distress.

While disabled Syrian refugee swimmer, Ibrahim Al-Huseyin led the Independent Paralympic team into Maracanã Stadium behind the flag of the International Paralympic Committee, moments of recognition and acknowledgement are few and far between for the world’s disabled refugees and IDPs. In 2011 only 1% of humanitarian aid reached old people and the disabled. It is likely that this has gone up since then,  as has the numbers of disabled due to population ageing and the rapid spread of chronic diseases, as well as improvements in the methodologies used to measure disability. However, the relatively meager increases in funding do not appear to be nearly commensurate with the needs of this population. The disabled represent a significant cost and source of tensions and stress for refugee communities.  Assistance to this population helps immensely with the challenges of familial and social resilience for refugee populations. A community whose most vulnerable are taken care of is much more likely to better integrate and more effectively assist with rebuilding their communities.
Topics
Fragility Conflict and Violence
Education
Health
Urban Development
Countries
Jordan
Lebanon
Syrian Arab Republic
Regions
Middle East and North Africa Thanks Omer for this important blog post. You flag the situation of persons with disabilities in situations of conflict and correctly point out that this population is often neglected might I add - even during the best of times. As you note there is much that we can do in our work to ensure that this population is included in all development efforts. One basic step is to recognize that they are part of the population and then look at tailoring support for all with the necessary accommodations persons with disabilities might require.
Charlotte McClain-Nhlapo

Many thanks for the comment. You are absolutely right, the disabled often get overlooked and neglected despite the fact that there are over a disabled billion people - 15% of the global population and with some 200 million with severe disabilities. Much of it has to do with sensitizing populations, including within the WBG, and there is a lot that can actually be done to make qualitative changes in their lives at relatively little cost and immense societal benefits in terms of social solidarity and allowing them to participate in the economy as productive members of society. Many projects as well as our country engagement documents, even in fragile and conflict affected states, barely mention the issue - ditto for our ASA. Yet this is an area to which all of us can contribute and though we are much better at this than we used to be, there is still a ways to go.

Thanks Omer for a good blog on an important topic. Just to add: we need to focus on both physical and mental "disabilities", as often mental disorders, including post-traumatic syndrome, are "invisible" needs often ignored.