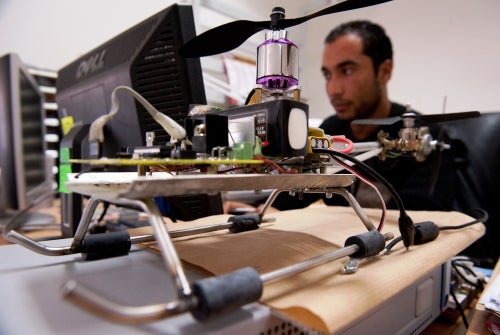 One thousand years ago, the famous Arab scientist and mathematician Al-Hazen moved from Basra to Cairo to take up a new job in a neighborhood near Al-Azhar University. At the time, the Middle East was a flourishing technology giant, with scientists, inventors, artists and philosophers moving freely from the heart of the Spanish peninsula to the deep enclaves of Central Asia. Al-Hazen was invited to Egypt by its young Caliph who, among many other rulers in the region, was a champion of knowledge and innovation. Al-Hazen and other inventors from the Middle East had both strong political support and access to resources, which led to some of the greatest scientific discoveries of their times. Why are things so different today?

Economists agree that one of the most important ingredients for creating and sustaining high quality jobs is factor productivity. That is just another word for good technology. Yet most governments in the region still shy away from this sector. It is as though technology were a foreign object or an unnecessary luxury, rather than vital to development and growth. One example, out of many, is the huge level of restrictions on providing internet services in many Arab countries. Only 36 out of every 100 citizens in the region have access to an internet connection and out of these 36 people only 3 have high-speed internet.

Access to these services can be drastically improved by passing modern legislation (Iraq, Yemen), or fairer regulations (Tunisia, Egypt, Libya) and in some cases even just by flipping a switch to allow people access to better internet cables (Lebanon). In reality though, political leadership and government bureaucracies seem unable to grasp the immense potential that would be unleashed by telecom sector reform, with benefits across the full range of society.

In the past three decades, as Arab populations have become younger the average age of their leaders has continued to increase. This is opposite to the trend of major industrialized countries like Germany, France, the United Kingdom, Russia, China and the USA in which older populations are increasingly putting their trust in younger leaders . In 2015 the average age of active heads of state in the Middle East is 68 years old compared to 58 for Europe, 61 for the Americas, and 63 for both Asia and sub-Saharan Africa. Arab leaders today are three times older than they were at the height of the Golden Age in 1000 AD. What is more alarming is that even after the so called “Arab Spring” the average age of incumbents rising to power in transition countries is about 70 years old - compared to an average of 45 years for their ousted predecessors.

In reality, age is obviously not the real challenge but rather the commitment and capacity of governments to support change. While travelling and working in more than 11 countries in the Middle East over the last three years, I have witnessed first-hand how the age and experience of current leaders has been devoted to managing reality rather than changing it. This does not have to be case.

Today, 100 million people in the Middle East are between the ages of 15 and 29. Unlike most of the world, the region’s youth cohort is expected to grow even larger over the next 50 years. This means that empowering this young and well educated population is a strategic priority for the future. Governments today can help encourage the development and implementation of innovative technologies by forging meaningful alliances with young people and by appointing younger public officials that are more familiar with the modern vocations of important ministries and public agencies.

The Middle East has proven that it does not lack the raw materials for a scientific renaissance. What it lacks today is the leadership committed to moving in this direction. Leadership focused on enabling today’s bright minds like that of Al-Hazen and providing them with the resources and support they need. With these kinds of champions, the Middle East technology sector would be certain to thrive.
Topics
Digital Development
Competitiveness
Countries
Algeria
Bahrain
Djibouti
Egypt
Iran
Iraq
Jordan
Kuwait
Lebanon
Libya
Morocco
Oman
Qatar
Saudi Arabia
Syrian Arab Republic
Tunisia
United Arab Emirates
West Bank and Gaza
Yemen
Regions
Middle East and North Africa