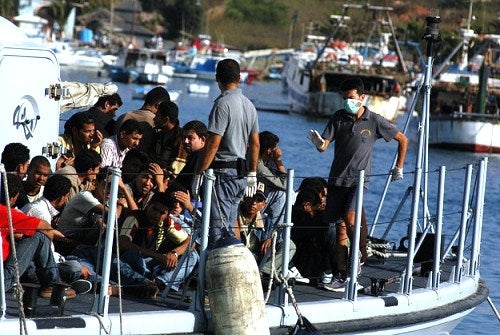 The human tragedy of thousands of asylum seekers floundering—and dying--in the Mediterranean highlights an unprecedented global challenge for the 21st century. “In terms of migrants and refugees, nothing has been seen like this since World War Two“, says Leonard Doyle, spokesman for the International Organization for Migrants (IMO). Globally there were estimated to be 16.7 million refugees and 34 million Internally Displaced People (IDPS) at the end of 2013. The conflicts in Iraq, Syria, Libya and Yemen alone have created  o some 15 million refugees and IDPs.  The numbers are growing almost on a daily basis. Just in the past few weeks, the fighting in Yemen has displaced another 150,000 while fighting in Iraq’s Ramadi has added another 114,000 to Iraq’s total displaced of around 3 million refugees and IDPs.

Most of the World’s displaced seek shelter either in their own or neighboring countries. However, buffeted by wars and harsh economic, political and social conditions people mainly from Africa and the Middle East but elsewhere as well, are escaping to the developed world to evade their circumstances – and doing so in growing numbers. And an ever larger number are dying in the effort. Across the world there were an estimated 866,000 asylum applications in 2014 to what the UNHCR calls the 44 “industrialized countries” – 270,000 more than in 2013. This is a number significantly less than the actual numbers of people seeking refuge or better economic circumstances, either legally or illegally, in host nations that offer varying degrees of hospitality. The largest number of asylum applications in 2014 were registered in Germany (173,100), followed by the US (121,200), Turkey (87,800), Sweden (75,100) and Italy (63,700).

According to the UNHCR, Europe received some 714,300 asylum claims in 2014, up from 485,000 in 2013. EU member states accounted for 80% of this number in 2014 – an increase of 44% compared to 2013. As to the country of origin of these asylum seekers the top 5 countries in descending order of volume were Syria, Iraq, Afghanistan, Kosovo and Eritrea. Syria and Iraq accounted for 30.1% of all asylum applications made in the EU. Many refugees do not immediately apply for asylum in their first point of entry. Many arriving in Southern Europe and the Balkans prefer to wait until they are in northern countries to apply for asylum given their better benefits, etc. Others may never apply, lacking proper documentation or unsure of their asylum prospects. They disappear into informal jobs as they try and build a new life for themselves.

Chances of receiving asylum vary widely. In the UK, 36% of applicants in 2013 received an initial positive decision – but there are appeal processes in play and various other means of staying in the country, legally or otherwise and only 24% of the 2013 cohort were sent back or took advantage of voluntary repatriation schemes. The EU averaged a 25% approval rate in 2013 – Malta (72%) and Italy (62%) had the highest approval rates. Only four countries Germany, Italy, France, and Sweden accounted for over two thirds of asylum applications in that year.

Clearly efforts by the EU to try and stem the flow of arrivals from the Mediterranean will still rely on fences and closed doors only serving to displace the challenge. Ultimately a policy of managed immigration is likely to be the final outcome as the UNHCR calls for a more robust search-and-rescue operation and enhanced legal avenues such as resettlement programs, humanitarian visas, and enhanced family reunification measures. However the EU will also have to deal with the Government in Tripoli which controls the ports of departure but is unrecognized by the EU. A strategy will also be needed to spread the burden of asylum seekers more equitably across the EU and even open transit camps in North Africa and elsewhere and tackle the smugglers and the financial gains made possible by current policies.

However, this is in reality a small portion of the global crisis on refugees and IDPs. By all means we should try and tackle this human tragedy and end the horrors being witnessed now in the Mediterranean. But we should also recognize that the global problem is getting worse as the wars in the Middle East and elsewhere continue and people are displaced and killed and maimed every day. Closing doors and building fences work in very limited ways. Refugees have a way of destabilizing whole societies and regions even decades after the tragedies that led to their displacement.  Just as we are doing with climate change and global epidemics, it’s time for a global response to the refugee crisis—before it further destabilizes an already fragile global order.
Countries
Algeria
Bahrain
Djibouti
Egypt
France
Greece
Iran
Iraq
Italy
Jordan
Kuwait
Lebanon
Libya
Morocco
Oman
Qatar
Saudi Arabia
Spain
Syrian Arab Republic
Tunisia
United Arab Emirates
West Bank and Gaza
Yemen
Regions
Middle East and North Africa You are right: it is time for a global response to the refugee crisis. And that response must be focussed on addressing the causes that push people to flee their countries, not the consequences. Notably the lack of economic opportunities, access to services, and other forms of deprivation, abuse, and violence, as it is well known. These are some of the same causes that push traffickers to traffic migrants, and youngsters to join extremist groups. In regards to the "Mediterranean crisis" which is actually a MENA crisis (as it is in those countries that the crisis is) it is quite surprising that the EU comes up with an agenda that promises to step up the patrolling at sea/borders, tackling the trafficking, and promises to think about the immigration policies (albeit commits to implement the existing ones, that many say are wrong), but there is no word about what will be done to support countries in the region address the structural causes of fragility and build viable economies and resilient communities and states. Not a single mention of this. The global refugee challenge is not about what to do with the refugees. It is about what to do with the countries they come from, which by the way are unbelievably silent (at least on public channels) about this matter. Some of these countries are at war where the thing to do is to bring peace (I am not saying it is easy, just that it is the thing to do). Some are countries that have been receiving AID from, or that have been business or geo-political partners of the West for decades. Unclear where the benefits of that ended. But in all cases, a smart and big package to support economic revitalisation may be a good idea in some of these countries. Refugees in the past returned to their countries (which is the best solution to a refugee crisis, when the return voluntary of course) because things were better in their countries, not because UNHCR was good at bringing them back. So the focus now must be, again, on the countries of origin and must be about economic development and provision of services (including security). I know this is obvious, but a quick read out of the debate today suggests that actually it is not. Look forward to reading about a major WB package to create opportunities that will give people in the countries from where the greatest number of refugees are coming from the choice of whether to risk their lives at sea or earn a living at home.

Absolutely - Once the immediate humanitarian concerns are dealt with in an effective and humane manner, the focus needs to be on ensuring that the countries of origin of the displaced and - where repatriations are unlikely in the near term - the hosting countries are supported to ensure that the burden of hosting is alleviated. This phenomenon is indeed unprecedented in scale and a global challenge, perhaps indeed best thought of as a "global public good". The dangers for example of creating an excluded underclass are apparent to all and with even the wealthy nations of Europe finding this a challenge at times, resources need to be funneled to developing host countries and the displaced to ensure that they are able to avail themselves of education and healthcare for their kids and employment for the young and the adults. All this of course has to be done in a manner that does not lead to friction between the displaced and hosting communities. The World Bank has indeed provided significant support to host communities in Jordan and work is ongoing to support the displaced in Iraq, Lebanon and elsewhere. The Africa region in the Bank, of course, has many years of experience in dealing with displaced populations with some valuable lessons for all. Indeed the Bank has engaged on this issue across the globe and continues to generate excellent knowledge on the subject while looking for innovative ways of financing to deal with this challenge. Our development partners and the World Bank Group are part and parcel of the development work needed to ensure the social stability and economic growth to stem the flow of displaced and ensure that the "stock" of the displaced presents as small a burden on hosting communities as possible. It is in the interest of all to ensure as smooth a transition as possible and make the resources available to address this challenge.

My home country is also facing this problem to accept the refugees even though our country is not rich and many social and economic issues still exist to be solved within our country. To be honest, I could not have enough knowledge to understand this issue, but, whenever I read this case, there are some questions that come up to my mind . ..whether they go to the rich countries in the Middle East or not; if not, why they do not usually go to these rich countries, and why they want to come to the poor developing countries like our country. If we understand this reason, we can find the solution.