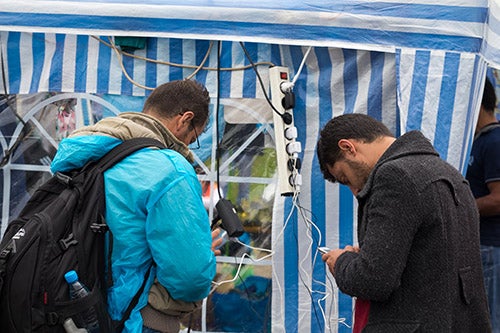 There are currently 66 million people forcibly displaced across the globe, 26 million fleeing their countries as refugees and 40 million internally displaced - the worst such crisis since World War II. The Middle East is among the most affected regions with over half the Syrian population forcibly displaced - six million as refugees, mostly in neighboring Lebanon (over one million),  Jordan (over one million), and Turkey (3.2 million), plus nearly a million asylum seekers in Europe. There are also millions of internally displaced peoples (IDPs) in Syria (6.3 million), Iraq (5.4 million since 2014), Yemen (2 million), and over 300,000 in Libya.

This massive movement of people has its own economic dynamics with large amounts of government spending, humanitarian and development funds, money flows from refugee livelihoods, as well as illicit trafficking of everything from people to various goods and the growth of criminal enterprises preying on the displaced and on hosting communities. As in all economic activity these days, technology plays a growing role

Cheaper mobiles (including smart ones), internet access, social media, and innumerable apps means that connectivity  is increasingly indispensable. According to Mercy Corps, “This is not to say conventional aid like food, water, and medicine isn’t still vital — it is. It just so happens that in this crisis, in particular, technology and information are a powerful and effective means of providing it.”

Indeed, digital tools play a role beyond humanitarian basics like education, health, employment, and dealing with bureaucracies. This means rethinking how to support displaced and host communities.

Keeping track of every relevant app and digital technology is nearly impossible, but one can get an understanding of their most common usages. The GSMA, which represents global mobile operators and companies, groups usage under 5 categories in its  “The Importance of Mobile for Refugees”  report. These are:   Techfugees, a voluntary group coordinating the international tech community’s response to refugee needs, also groups their work under five focus areas. These include: infrastructure, focused on providing internet access, including used phones via Geecycle,  education, with its vast number of tools and apps, identity issues, including Microsoft and Accenture’s global ID system for refugees and extending to recognition of diplomas, certificates, etc, health, ranging from UCLA’s LUCAS performing basic diagnostic testing from a camera phone to mental health applications such as Karim and Crisis Info Hub , and inclusion, focused on livelihoods and integration.

Large databases from the UNHCR, the EU, and national governments keep track of the forcibly displaced. Technology unfortunately also facilitates illegal activities from human trafficking and smuggling to other organized crime activities. Efforts to police the displaced while strengthening borders are also technologically-intensive.

Drones are another rapidly developing technology. The UNHCR monitors displaced populations and their needs using drones, while drones help monitor and rescue  Mediterranean and  Aegean asylum seekers. Drones are also used for extending Wi-Fi to refugee camps and displaced populations. Drones will soon be increasingly delivering aid, especially to IDPs  who are often more isolated than refugees. With trials of drones carrying people, the days when responders are airlifted in and the injured are evacuated may not be far off.

Simpler, improvised technologies also have a role. Syrian IDPs produce diesel from plastic bags and scraps - boiled for 12 hours in metal and stone ovens, then distilled for transport, generators, etc. Televisions, radios, cell phones and laptops are charged using pedal power. Solar panels abound, some locally manufactured in Syria, as do improvised wind power devices. On solar power, Yemen has forged ahead the most aggressively with solar panels almost ubiquitous, from units powering a few lamps for $20 to powering lights, a washer, and television for $80, as well as solar water filters. This is feeding a new and growing economic sector.

Distributed renewable power systems may also be politically expedient in camps or encampments for the forcibly displaced since traditional power systems could project a politically unacceptable perception of permanence. There are also larger solar power plants such as in Jordan’s Za’atari camp, funded by Germany and serving 80,000 Syrian refugees.

These technologies create new opportunities while changing how humanitarian and development aid is delivered to displaced peoples and to host communities. Access to the internet, to mobiles, and other technologies is becoming an integral part of delivering aid and to  support small distributed energy systems and other localized service providers and markets.

All of this requires closer cooperation with the private sector and local actors. Large donor and government bureaucracies will need to become nimbler and more tech savvy as they adjust their policies. This may include enabling greater use of airwaves and air space even as they exert less control over these resources. They will also need a rights based approach ranging from a focus on data confidentiality to ensuring that the most vulnerable who may lack access to these technologies are not excluded.