A Glimpse of Light in Yemen: Enabling a booming solar industry through entrepreneurship and innovation

The conflict in Yemen, raging since early 2015, has had a devastating impact on the country’s infrastructure. Saana, the largest city in Yemen with a population of almost 2 million people, is completely without public electricity. In fact, six out of the 10 cities surveyed in mid-2017 by the World Bank, as part of the Yemen Dynamic Damage and Needs Assessment Phase II (DNA), had zero access to public electricity, with the remaining four cities having only a few hours of electricity per day.

To make matters worse, fuel shortages and price spikes have caused a 77 percent drop in fuel-based electricity generation between 2014 and 2015. In the same period, nighttime light emissions from Yemen dropped by two thirds.

Critical infrastructure, including hospitals, water wells, sewage treatment centers, banking systems, and phone networks, is severely affected by the lack of electricity. People’s livelihoods have ground to a halt, including in farming and irrigation, a sector that makes up almost 80 percent of the Yemeni economy. 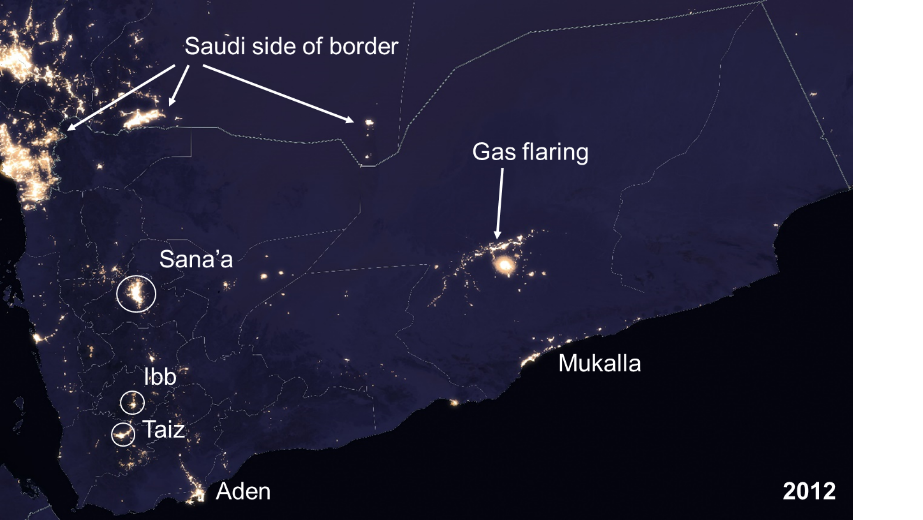 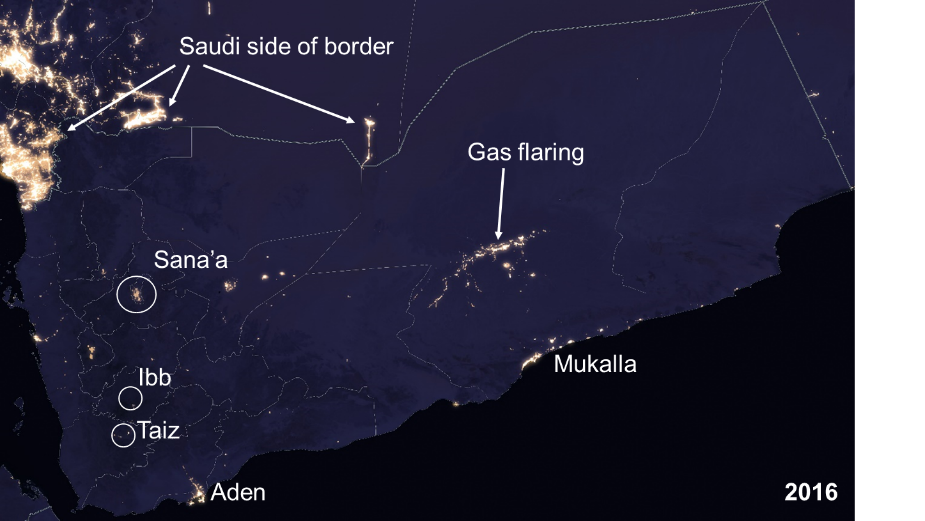 Figure 1: Satellite images from 2012 and 2016 indicating decline in electricity consumption. Note: light emissions around Marib and Seiyun are partly from gas flaring.

The United Nations Office for the Coordination of Humanitarian Affairs (OCHA) estimates that almost 20 million people, nearly two-thirds of the population, are in urgent need of basic food, water, and healthcare supplies — all sectors which rely heavily on electricity.

Amidst the darkness, and despite the blurred lines of territorial and governmental jurisdictions, Yemen's solar sector has emerged as a rare success story. A booming industry and solar revolution have blossomed in these desperate circumstances, complete with complex supply chain networks connecting major international suppliers with local dealers that span from small shops on every street corner, all the way up to Yemen’s main ports and over-land crossing points. 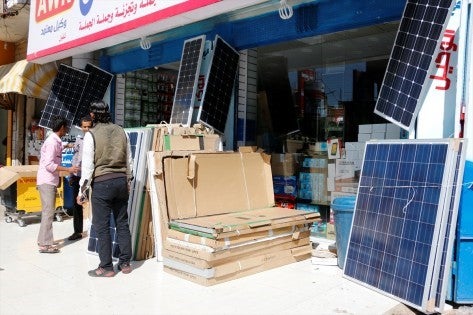 Figure 3: Solar panels on sale at a local shop in Sana’a

According to a market assessment conducted by the Regional Center for Renewable Energy and Energy Efficiency (RECREEE) and commissioned by the World Bank, as of November 2016, solar photovoltaic (PV) systems had reached up to 50 percent of Yemen’s households in rural areas and 75 percent in urban areas. A January 2017 survey conducted by the Percent Corporation for Polling and Transparency Promotion reached a similar conclusion, finding that half of Yemenis had some form of off-grid solar access, with rates in some governorates reaching over 80 percent. Moreover, a recent WFP phone survey conducted in November 2017 demonstrated that in comparison with generators, candles, batteries, and network energy, in 14 of 22 governorates solar energy is the main household energy source.

Despite the crisis and its severe impacts on the functioning of the Yemeni economy, investments in the sector have surged. The RECREE assessment estimates that over US$ 1 billion has been invested in Yemen’s residential solar PV sector over the past 5 years. While unprecedented in a country experiencing conflict, the rapid boom in the solar industry is a testament to the resilience and determination of the Yemeni people  pushing to take the matter of energy access into their own hands.

Unfortunately, the rapid boom in the solar industry, coupled with desperate demand for electricity, has left quality assurance as an afterthought. The general lack of technical knowledge and awareness means that systems are assembled hastily using poor designs that prioritize components that are more affordable, of lower quality, and more easily available rather than higher quality alternatives. Since no national quality standards exist, after-sales support and routine maintenance are not common place, resulting in the break-down of most systems after only a few years of operation.

Another key challenge is affordability and access to finance. Wealthier households can either afford to purchase sufficiently large, high-quality solar PV systems outright or can provide the necessary collateral to obtain bank loans. For the vast majority of low to middle-income consumers, as well as for critical facilities including hospitals and schools, a lack of funds and guarantees make obtaining solar PV systems difficult. As a result, Yemenis are more likely to opt for smaller, lower-quality designs, which can trap them in a cycle of poverty and energy insufficiency. Indeed, according to the WBG 2017 phone survey, in spite of 55 percent of Yemeni households relying on solar energy for their main source of energy, only 10 percent of those households state that the energy provided by the system is sufficient for their needs.

Building on the remarkable success of the solar energy sector in Yemen, and aiming to improve on the aforementioned gaps and shortcomings, on April 13th, 2018, the World Bank approved the Yemen Emergency Electricity Access Project (YEEAP), a US$50 million IDA-funded grant with the objective of expanding access to electricity and electricity-dependent public services for rural and peri-urban populations through the distribution of solar energy systems.

The project will engage the solar supply chain in Yemen and local microfinance institutions (MFIs) to provide concessional debt and grant financing to both households and critical sectors that include health, education, water, sanitation, and agriculture. MFIs in Yemen are a natural partner for this project due to their proven resilience in the face of ongoing conflict and their far-reaching networks, as well as existing solar energy programs, and trained personnel. The project will also work with the local private sector to expand the reach of their supply chains, strengthen quality standards, and improve after-sales support through business development and capacity building. The operation will be conducted through coordination with the United Nations Office for Project Services (UNOPS), which will subcontract local partners on the ground with proven track records.

The project aims to restore electricity supply to 200,000 households (1,340,000 people), 400 health facilities and 800 schools. In addition, an estimated 20-30 percent of the investment value is expected to remain in the Yemeni economy and create jobs. Moreover, the Project will reduce carbon emissions by 430,000tCO2 and contribute to meeting Yemen’s Nationally Determined Contribution to the Paris Agreement.

The conflict in Yemen is forcing the country to redesign the fundamental blueprint of the local power sector towards a reliance on sustainable solar energy systems. With proper nurturing, Yemen’s post-conflict power sector could leap-frog generations of power sector reforms , paving the way for an entirely new way of delivering electricity to consumers in a manner resilient to political, economic, and conflict shocks. Indeed, Yemen could serve as a beacon of light for citizens hoping to take power back into their own hands through entrepreneurship and innovation throughout the MENA region, and beyond.
Topics
Fragility Conflict and Violence
Energy
Environment
Countries
Yemen
Regions
Middle East and North Africa Fantastic article. Clearly lays out the importance of distributed solar and how its addressing the short -term needs and delivering electricity to consumers in Yemen and proving that solar is particularly important not only because its affordable, reliable, and quicker to deploy but also as it is less " damage prone" and resilient to conflicts compared to large-scale infrastructure. We have seen similar experiences in Haiti and more recently in Puerto Rico as well.
The importance of quality of products and after-sales servicing facilities for these technologies is the key to scaling up the transformation of this market, as clearly stated in your article. One could possibly draw from the World bank's Lighting Africa experience where the situation was similar in early 2000s, with standardization and quality specs along with capacity building, training and awareness generation facilitated by Lighting Africa went a long way in successfully shifting the solar PV markets in the region to adopt globally-acceptable standards in terms of quality of products being sold there today.
One more point that I was curious to know and personally interested to explore further in the Yemen context is - especially wrt your point regarding solar PV not being sufficient to meet all the current needs and WBG survey concluding that only 10 percent HHs feel that they have sufficient energy to meet their needs, one could explore hybrid solutions where solar combined with energy efficient appliances (ranging from efficient LED lamps to DC-powered TVs) could multiply the benefits for the households very cost-effectively even when using solar PV with limited capacity. Essentially, the idea would be to “squeeze” as much “Final energy” or “End use” energy as possible from a solar PV panel of limited size …. Implementation and business models along these lines of integrated EE-RE interventions are already emerging in Africa and South Asia countries like India, Pakistan and Bangladesh, where entrepreneurs have come up with viable business practices where they just don't sell solar panels but sell packaged energy end use solutions – which combines solar panel with a bunch of LED lamps, a super-efficient small color TV (sometimes DC based), a super-efficient ceiling or table fan – effectively cutting the size and cost of solar PV to as much as half the traditional size (with BAU appliances) or allowing the consumers to get more lumens, more fans with same size solar PV panels… This model is quite viable in terms of initial costs and payback periods. We are trying to explore these integration approaches through new private sector driven delivery models further in the new ESMAP – funded Yemen activity but these also could be explored and pilot tested in both the World Bank Yemen IDA operations under implementation – It will be good to explore if energy efficiency measures can be built into into more robust integrated solutions and business models in the rural and peri-urban context as well, making it more viable to low income and poor consumers.