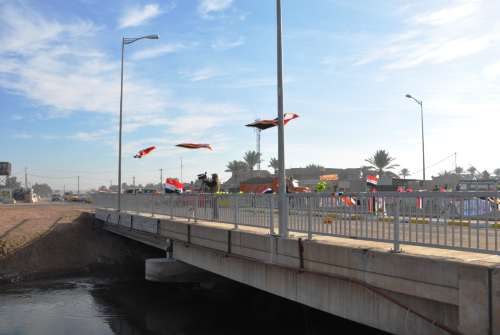 In eastern Iraq’s Diyala governorate, a bridge connects two cities—Baquba on one bank of the river and Muqdadya on the other. Nothing remarkable about that, you might think, until you know that this bridge had been blown-up by the Islamic State in Iraq and Syria (ISIS) cutting off the many Iraqis who commute between the two cities in quest of work or education.

The reconstruction of the 40-meter long Al-Haronya bridge reinstated safe passage across the Diyala River for vehicles and pedestrians—a pedestrian walkway was included. The repairs were extensive, involving the disposal of badly damaged parts of the bridge and their replacement. They were carried out by Iraqi government contractors and financed by the World Bank Group’s Emergency Operation for Development Project (EODP) in Iraq.

Six bridges (Al-Haronya, Al-Sudour, Imam Ways, Nareen, Muthana, and Sheesheen) of a similar nature in Salah Ad-Din and Diyala governorates have also been completed and open to traffic. Five more bridges in Anbar Governorate, in western Iraq, are also undergoing reconstruction are expected to be completed before the end of 2017.

At one bridge, Ahmad Faraj, an engineer working on a reconstruction site in Salah Ad-Din, said that the bridge had been blown up and destroyed so badly that it had to be torn down and rebuilt entirely.  The causeway alone now caters to 750,000 people traveling every day to and from Baghdad, he said.

About 62.5 kilometers of regional roads are being rehabilitated as part of this project as well, some poorly maintained but others damaged by terrorist activities and the movement of heavy military equipment. The overall cost of road repair in Iraq is high, about $144,000 per kilometer per lane, with the EODP having to factor in price increases because of security risks.

The supplied water and sanitation equipment costing $25 million will help reinstate critical municipal services to over 150,000 citizens in As-Sa’adiya, Auzaim and Jalawla’a in Diyala governorate. H.E. Dr. Mustaf Al-Hitti, head of the Iraq Reconstruction Fund, stated that “the supplied equipment are from internationally reputable manufacturers with long experience in Iraq and with local maintenance workshops”. Such equipment includes wheel loader backhoes, sewage vacuum and sewage jetting trucks, water tankers, crane trucks dumpers, tractors, garbage trucks and steel garbage containers. Similar equipment has also been supplied to Tikrit, Al-Alam, Dhuloieya and Al-Dour municipalities in Salah Ad-Din governorate serving about 800,000 citizens; and to Ramadi and Fallujah in Anbar governorate serving 650,000 citizens. According to H.E. Muthana Ali Al-Tamimi, governor of Diyala “the new equipment will enable us to supply drinking water to the citizens until the water networks are repaired”. Work is currently under preparation to rehabilitate water and waste water systems including water purification plants, water compact treatment units, water and wastewater distribution networks and wastewater and stormwater pump stations. Once completed, the water supply system will be upgraded and improved meet the citizens’ demand for drinking water in the above municipalities.

The project started in the spring of 2015 after Iraqi Prime Minister Al-Abadi asked the Bank’s President Jim Yong Kim for support in facilitating the return of ordinary Iraqis to cities the Iraqi government had recently recaptured from ISIS. The Bank was to launch a reconstruction program that would complement a stabilization program supported by other donors. In July 2015, its Board approved a $350 million loan for the EODP, which became effective in September 2015.

Members of a Bank rapid assessment mission found the colossal amount of destruction in Iraq would take years to reverse. But, with about $113 million (32%) of the Bank’s loan since committed, on the ground the results are already visible due to the efforts of Iraqi institutions and support from technical experts from the Bank.

The project preparation process required a detailed assessment of the massive amount of damage ISIS had caused deliberately to bridges to obstruct the Iraqi army. It also made sure the above mentioned bridges were restored to their original structural design and within the same footprint. This involved a combination of national and international expertise, as well as contractors and supervisory staff from Iraq’s Ministry of Construction and Housing. The five bridges were rebuilt in about 12 months at a cost of about $10 million.

Staff members from the Construction ministry are building their capacity for another reconstruction program, this time in Mosul, where Iraqi government forces are still liberating parts of the city from ISIS. The Bank’s team is also busy preparing its documentation for additional financing for the program. It is a model of reconstruction that could be replicated in reconstruction programs elsewhere in the Middle East & North Africa, for example in Syria, Yemen, and Libya.
Topics
Fragility Conflict and Violence
Urban Development
Transport
Countries
Iraq
Regions
Middle East and North Africa Program Assistant/Operations at the World Bank