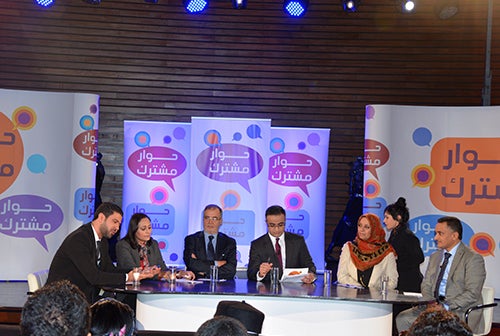 You never know what you might hear on the Libyan debate show Hiwar Mushtarak, or ‘Shared Debate.’ The show aims to foster an open dialogue about the country’s current challenges and its potential future by bringing together Libyans of all stripes. There are panel discussions featuring a diverse range of Libyan politicians and civil society activists, and the audience is encouraged to engage, giving a voice to ordinary Libyan citizens.

For a recent show to commemorate Libya’s February 17 revolution, which five years ago led to the ousting and death of former leader Muammar Gaddafi, a panel debated the question: What is the way forward? On a stage at the Science City Auditorium in Tunisia’s capital Tunis, where the show was recorded, panelist Amal Labeidi, Professor of Politics at University of Benghazi, began by highlighting the need for disarmament. She insisted that   securing the large amount of weapons circulating within the country’s borders was a primary concern that needed to be addressed first. “No democratic progress can be achieved without security ,” said Labeidi.

The discussion remained focused on how to build a secure and stable state.  Panelist Hisham al-Wendi, independent participant in the UN Libya talks, insisted that priority needed to be given to creating a culture of tolerance and forgiveness. To which Giuma Atiqa, former Vice President of the Tripoli-based General National Congress (GNC), added the importance of reconciliation. “There is a link between national reconciliation and security,” he said.  Efforts to heal wounds are an integral part of re-building society, observed Atiqa. For Mustafa El Sagezli, Director of General Libyan Program of Integration and Development, who works on re-integrating former fighters, it was essential that all willing parties are included in the dialogue about the country’s future. “With exclusion you feed hate,” he said. Najwa al-Fitouri, Member of Voice of Libyan Women for Peace, emphasized that the time for dialogue was ripe.

Along with listening to panelists, one of the principal aims of Hiwar Mushtarak is to give the audience a rare opportunity to voice their opinions freely. “The aim is to support a culture of dialogue,” explained the show’s producer, 23-year-old Libya Idris from the development charity BBC Media Action, which has trained and supported the show’s Libyan staff.

The around 200 audience members for this episode followed the debate closely. In addition to security, the show addressed topics such as the Government of National Accord (GNA), terrorism and whether or not to support a Western intervention to target the Islamic State. On the latter, most of the Libyans present seemed to reject the idea. One of them, a young man in the audience, opposed any foreign interference. “We refuse to become another Iraq,” he said to the panelists.

“This is a collective effort to overcome divisions and hopefully circulate ideas through, for example, social media,” said panelist Labeidi after the show. “The more we discuss our problems, the better.”

”There are no debate shows like this in Libya,” said Nemat Ghanimi from Tripoli, who was temporarily in Tunisia and took advantage of the opportunity to join the audience. According to the 19-year-old, the show empowers young people by giving them a way to communicate with politicians.  For another of the young women in the audience, 19-year-old Janan Abdulkader, this was the second time joining the program.  When she came to the last show she was immediately captivated. She had never heard of a show where anyone in the audience could openly ask questions. Politics had held little interest for her before, but she is now keen to get involved in the show. But most of her Libyan friends in Tunisia are reluctant to come. She has tried convincing them but they are afraid it could cause them problems.

“The program shows that you can have a heated debate without using violence,” said the show’s host, 30-year-old Raafat Belkhair, “Libyans can find a common ground.” To him, it is especially important at this period of time in Libya’s transition to emphasize that expressing one’s opinions is a right. While Belkhair likes an interactive and heated debate he admits that sometimes the discussions can get overly heated, and then it is important to remain neutral and well-organized.

This episode was recorded in Tunisia but Belkhair, who is from Tripoli, is hoping that the show will return to Libya in the very near future. Ghanimi agrees. It sends the wrong message having the show in Tunisia and not in Libya, she said. Despite supporting the initiative she is skeptical it will lead to any concrete solutions. The next episode will be recorded in April, this time in London, a city with a large Libyan diaspora. “And perhaps the one after will be in Libya, inshallah (God willing),” said a hopeful Abdulkader.

Towards the end of the show, Belkhair asked the audience: Are you optimistic about the GNA? About half of the audience raised their hands, which may reflect the divided and cautious political opinion among many Libyans five years after the revolution.
Topics
Social Sustainability and Inclusion
Countries
Libya
Regions
Middle East and North Africa