MENA: The time to act is now

Countries in the Middle East and North African region (MENA) cannot wait until the end of the pandemic to begin rebuilding the after COVID-19. It is time to act—now.

The World Bank just released its biennial Poverty and Shared Prosperity report, which provides the most comprehensive picture possible of poverty around the world. The report will be at the center of the World Bank’s discussions during this year’s End Poverty Day events on October 17.

The report paints a bleak picture. For the first time since 1988, when the World Bank started tracking extreme poverty across the globe, the rate of poverty has increased. This year, 88 to 115 million people will be pushed into extreme poverty, bringing the total to between 703 and 729 million. COVID is much to blame, but so are conflict and climate change. The goal of eliminating extreme poverty by 2030 globally, which for a long time seemed achievable, is now largely out of reach.

The global picture is already concerning, but the evidence for MENA is worse. Prior to the onset of COVID-19, MENA was the only region in the world where extreme poverty was increasing, driving by conflicts in Yemen, Libya, and Syria. The economic downturn in Lebanon reinforced this trend. COVID worsened the situation further. Three million additional people are projected to have fallen into extreme poverty in the MENA region due to COVID alone. Unfortunately, these projections give a conservative estimate of the real impact of COVID on extreme poverty. Phone surveys show the high degree to which people are losing their livelihoods and how poverty is making inroads in populations that had previously been relatively spared: those in urban areas and small (informal) business owners. Unemployment, already exceptionally high before the crisis, has worsened and further reduced the very limited job prospects of the region’s youth and women. Food insecurity is on the rise, as is gender-based violence.

The impact of the pandemic will be lasting. Many have dropped out of school, reducing the economic prospects of the next generation and worsening mediocre human capital indicators. Increasing public debt, dwindling foreign reserves, and high rates of non-performing loan ratios suggest that the consequences of the pandemic will be long-lived. The ability of the public sector to kick start the economy once COVID has been brought under control is limited. On the contrary, worsening public sector finances, due to reductions in tax collection, suggest cuts in public service provision are in store.

COVID hit the MENA region at a time when life satisfaction was already plummeting. The measure of life satisfaction takes on special meaning in the region, because it was the only indicator which—prior to the Arab Spring—suggested something was amiss. Conventional measures of development, such as GDP growth, Gini coefficient, and extreme poverty reduction raised no red flags at that time. But less conventional measures of well-being, such as life-satisfaction, hinted at the growing dissatisfaction that ultimately erupted in intense civic movements.

Declining life satisfaction is, in-itself, reason for concern. In combination with worsening development indicators, it is reason for alarm, not in the least because the politically engaged are especially hard hit by declining economic outcomes. More than half of MENA’s extreme poor are below 15 years of age. Unemployment is worse among the youth. The new poor are found especially in urban areas. Dissatisfied, unemployed urban youth make for an inflammable situation in the best of times. Combined with a pandemic that keeps many locked-up at home, one can only imagine the degree of pent-up frustration. 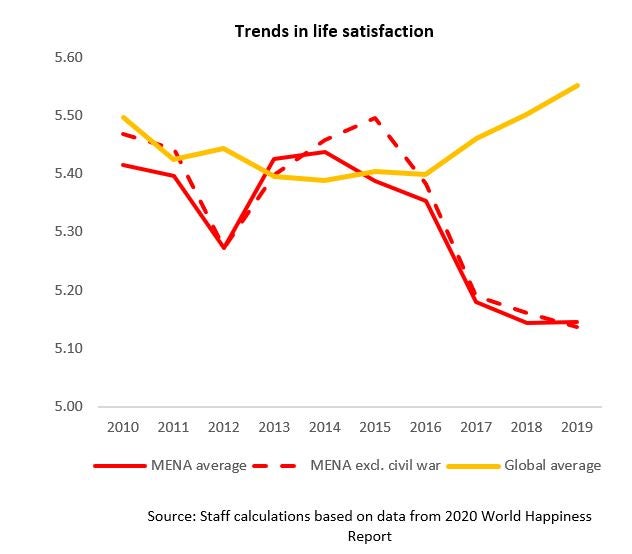 Political activism can only be encouraged, but the legacy from the Arab Spring is far from uniformly positive. Pro-active decision makers channel the youthful energy toward objectives that lead to better outcomes for all. This requires measures beyond the many taken to deal with the pandemic, like the scaling up of social transfers, investments in health care, and in on-line service provision. Unfortunately, few such reform measures are being undertaken. Development Policy Financing, which is predicated on implementing ambitious reform programs, has slowed to a trickle. Initiatives to accelerate digital transformation, or to improve competitiveness and transparency, progress at a pace that suggests limited urgency.

This is a time for bold reforms, to demonstrate a readiness to ‘build back better’, and to improve the prospects of millions and millions of citizens. The Poverty and Shared Prosperity report and other development indicators show there is no time for complacency. The time to act is now.

This is the first in a series of blogs by Ferid Belhaj (Vice President for MENA) and Nadir Mohammed (Director of Equitable Growth, Finance, and Institutions–MENA) on what the World Bank can do to help navigate the COVID-19 pandemic and its socio-economic consequences. Prior to the onset of COVID-19, MENA was the only region in the world where extreme poverty was increasing, driving by conflicts in Yemen, Libya, and Syria.