Middle-class dynamics and the Arab Spring 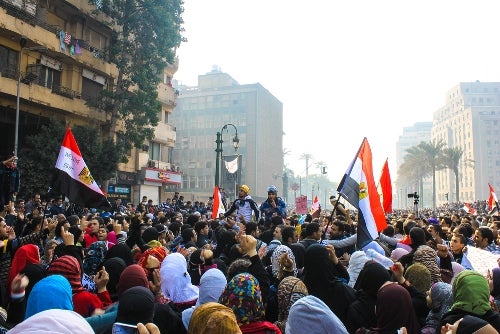 What do middle-class dynamics in the 2000s tell us about the Arab Spring events?  In modern economies, the middle class not only bolsters demand for private goods and services, but also insists on good governance and public services, such as education, health, and infrastructure. Investments in these areas improve the capacity of the economy to grow not only more rapidly, but also sustainably and inclusively. Therefore, understanding how the middle class fares in the Arab world is of crucial importance.

However, figuring out who has middle-class status in the Arab world is not a straight-forward task . The shortage of survey data for analysis of consumption patterns over the long term in Arab countries has been a major reason for relying on definitions that focus on other aspects of middle-class behavior (political and professional affiliations, for instance) or for using the existing definitions of middle-class status for other regions. As an example, a study by United Nations Economic and Social Commission for Western Asia shows that adopting these definitions results in estimates of the middle class in the Middle East and North Africa (MENA) that are either implausibly small (under 5% of the population) or implausibly large (more than three-quarters of the population).

In our research, we’ve estimated the size of the middle class in Egypt, Jordan, the Palestine territories, Syria, Tunisia, and Yemen using the vulnerability approach. Under this method, middle-class status is assigned to people with income higher than a specified vulnerability line; namely those who are reasonably secure from falling into poverty. We calculate this vulnerability line at $4.9 per day per person in 2005 terms; above this line the probability of falling into poverty in the next period is less than 20%.

Figure: Population share of the middle class by country 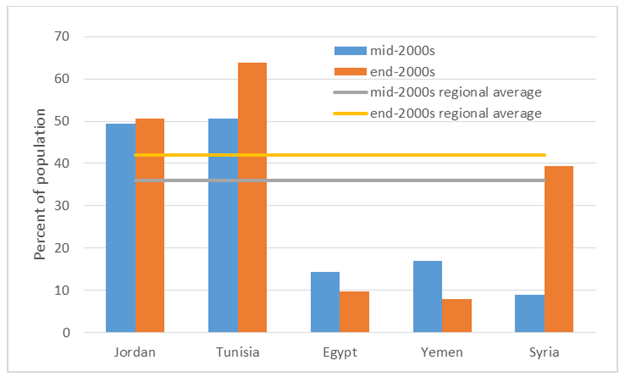 During the same period the middle class was also becoming increasingly unhappy and frustrated, even in the countries where the middle class was growing. Happiness levels declined in all countries included in our analysis during the pre-Arab Spring period in the 2000s, and these declines were particularly pronounced in Arab Spring countries and among the middle class segments of society. Recent research associates the low levels of happiness in the region on the eve of the Arab Spring with perceptions about deteriorating living standards, especially the quality of public services, high unemployment, and governance issues.

There may be a lesson to take away in the context of middle-class consensus, possible in countries with a large share of income for the middle class and a low degree of ethnic divisions. Such a consensus can be associated not only with better development outcomes but less political instability and lower incidence of civil wars.

Our analysis of middle-class dynamics suggests that there was no middle-class consensus in the Arab Spring countries. The large and growing Tunisian middle class was not feeling prosperous and was fractured in terms of political and social views. In Egypt, the middle class was small and getting smaller as many people were getting poorer . In Syria, the middle class grew quickly from a small base , but the emerging middle class was growing more unhappy and fractured. In Yemen, a combination of sharp divisions and a small and declining middle class created conditions for instability.
Topics
Social Sustainability and Inclusion
Countries
Egypt
Jordan
Syrian Arab Republic
Tunisia
West Bank and Gaza
Yemen
Regions
Middle East and North Africa