This is the third in a series of blogs based on the July edition of the Quarterly Economic Brief: Predictions, Perceptions and Economic Reality - Challenges of Seven Middle East and North Africa Countries Described in 14 Charts 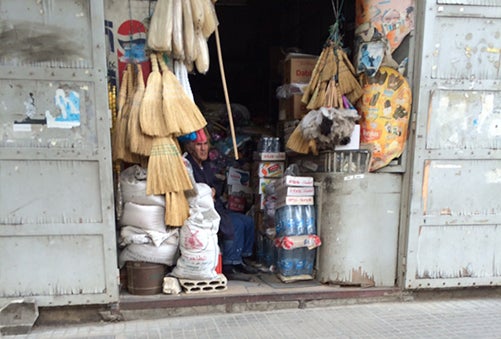 Seven countries in the Middle East and North Africa (MENA) region --Egypt, Tunisia, Iran, Lebanon, Jordan, Yemen and Libya (MENA 7)--are facing similar economic problems:  i) volatile growth that has remained significantly below potential; ii) limited fiscal space resulting from rising budget deficits, public debt and declining foreign reserves that have reduced savings available for public and private investment; and iii) a weak private sector that is far from becoming a driver of growth and creator of jobs. This last factor is especially critical for the large number of people – including more educated young people, and female graduates in particular - trapped in unemployment, and pushed into the growing informal sector. (Chart 1).
Interactive Chart 1: Dramatic fall in economic growth
Learn About Tableau

Bulging fiscal deficits have increased governments’ borrowing, exacerbating macroeconomic imbalances. The problem of high government budget deficits pre dates the 2011 uprisings and has negatively affected inflation, current account balances and growth in almost all of the MENA 7 countries. The sharp increase in budget deficits post-2011 is due to the governments’ increased spending--in response to social and political pressures-- particularly on fuel and food subsidies and the public sector wage bill. Recent data show that the government debt has increased substantially after 2011 to finance the budget deficit, particularly in Egypt where official data show that the ratio of total (domestic and external) government debt to Gross Domestic Product (GDP) ratio remains elevated at 88.8 percent at the end of March 2014, about 9 percentage points higher than its level at the end of the 2010 financial year.  In Jordan, the public debt to GDP ratio increased by 6 percentage points in the first quarter of 2014 compared to the same quarter of the previous year. This upward trend in the governments’ debt levels has significantly exposed these economies to various economic shocks.

The pattern of rising government spending cannot be sustained given that budget revenues remain at their historical trends. Fiscal revenues are not diversified as all seven countries rely on a single export product, which has made their source of revenues highly vulnerable to external price shocks. On the expenditure side, general subsidies on fuels and food and wages and salaries constitute a large share of government spending. While general subsidies are a burden on public finances, they have primarily benefitted the rich more than the poor (Chart 2). These subsidies constitute more than 10 percent of GDP and at least 20 percent of total expenditures in the majority of the MENA 7 countries (except in Iran where general subsidies were replaced by universal cash transfers in 2012). For example, food and fuel subsidies in Libya exceed government’s social spending on health and education; Egypt spends seven times more on fuel subsidies than on health. Yemen spent a third of its revenue on general food and fuel subsidies in 2013. The wages and salaries share of total government spending in Yemen also exceeded 60 percent in the same year. While there have been some efforts to rationalize subsidies in Jordan, Tunisia and Egypt--the new government of Egypt has proposed a budget cut of about US$6 billion in the new budget by reducing energy subsidies – rationalizing subsidies remains a thorny issue in the rest of the MENA 7 countries.[1]
Interactive Chart 2. General fuel and food subsidies have mostly benefitted the rich
Learn About Tableau

Rising fiscal deficits have forced these governments to tap into their foreign reserves, particularly in Egypt where the latest data show that net international reserves reached US$16.7 billion at the end of June 2014, less than half of total reserves prior to the revolution. Libya and Iran have had to dig into their (albeit sizable) stock of reserves to finance their growing budget deficits in 2013 and 2014. Both countries suffer from declining oil export receipts. Yemen’s oil pipelines continue to be vulnerable to sabotage, impacting oil exports and causing  foreign reserves to slip for the fifth consecutive month to $4.6 billion in May 2014 (enough for about 4 months of imports), their lowest level since June 2012. Estimates show that while Egypt could gradually re-build its stock of reserves with the help of the Gulf funds, Iran, Yemen and Libya will drain their foreign reserves by at least one third in 2015.
Finally, the private sector in the MENA 7 countries is not dynamic due to the weak regulatory environment and limited access to credit. The public sector, including state owned enterprises (SOE), is large in size and has privileges in all aspects of the economy leaving little space for the private sector to grow. A World Bank report showed that in Tunisia, over a 17 year period, 25 decrees were issued to benefit firms connected to the ruling family that made it difficult for other companies to enter the market.
Interactive Chart 3. Weak private sector activity due to the constraints in the investment climate
Learn About Tableau

Note: Strength of legal institutions refers to the average ranking on getting credit, protecting investors, enforcing contracts and resolving insolvency, while complexity and cost of regulatory processes does the average ranking on starting a business, dealing with construction permits, getting electricity, registering property, paying taxes and trading across borders.

In the World Bank’s indicators that capture the quality of the business environment, all of these countries are ranked towards the lower end of the spectrum (Chart 3). For example, the ease of doing business indicators ranked Libya, Iran, and Egypt close to the bottom of the list in 2013 with Libya standing at 187th out of 189 countries. One of the constraints in improving private sector activity is access to credit and foreign exchange, which are mostly allocated to the elite. Furthermore, laws and regulations related to investor protections are not clear and limit the ability of investors to raise capital.

[1] There have been some efforts to rationalize subsides in Yemen and the government raised the official price of petrol by 60 percent to 200 Yemeni Riyals per liter at the end of July.