Rural non-farm activities in the Middle East and North Africa: a path to poverty reduction?

In the developing countries of the Middle East and North Africa region (MENA) more than 60% of the population lives in urban areas. At the same time, poor people are disproportionately concentrated in rural areas (figure 1). For example, according to the World Development Indicators, 40% of Morocco’s population in 2013 lived in rural areas, while 79% of poor people (defined using the national poverty line) lived in rural areas. What this shows is that to reduce poverty in MENA countries, we need to pay close attention to rural areas. 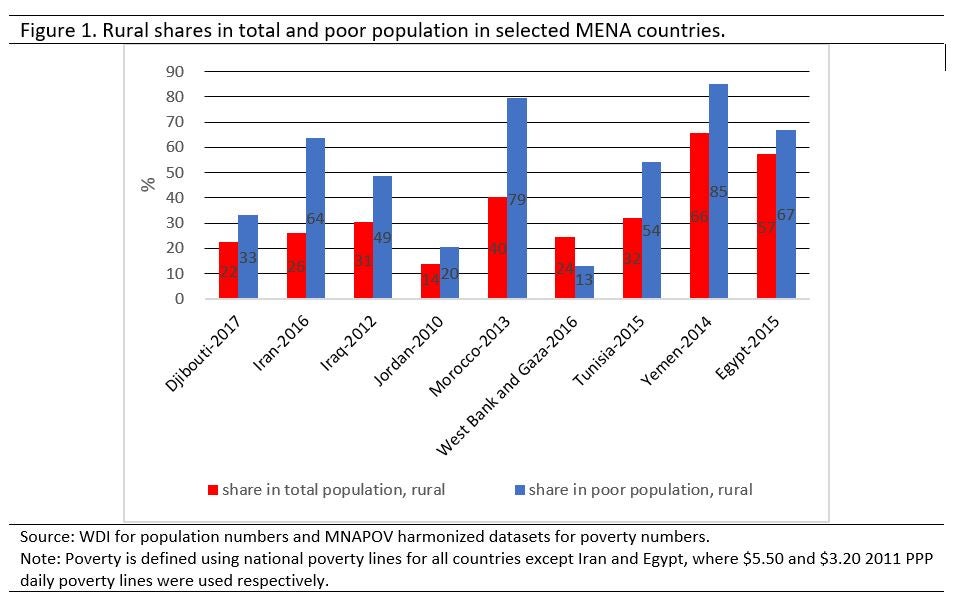 Investing in the agricultural sector and improving agricultural productivity is key to eradicating poverty, hunger, and malnutrition. However, in MENA, which  is one of the most land- and water-constrained regions in the world, the potential for agriculture might be limited. Diversifying out of agriculture into non-farm activities in rural areas may be another pathway to reduce poverty. Indeed, the share of non-farm employment in rural areas of MENA countries is quite high and is correlated with the size of arable land per person, as shown in figure 2. Rural non-farm activities play an important role in Djibouti, Jordan, and the West Bank and Gaza where land is at a premium.

Employment in the non-farm sector is also associated with lower poverty, as shown in figure 3. This signals that non-farm activities have higher returns than agricultural activities and may have a stronger effect on reducing poverty. On the flip side, this may also signal that poor people may not necessarily be able to access non-farm activities due to constraints such as access to finance, skills, and education, among others.

To sum up, despite urbanization, poverty is still concentrated in rural areas of many developing MENA countries. Poverty reduction in water- and land-constrained rural areas of the region may not only require improving agricultural productivity, but also ensuring access to non-farm activities. According to the most recent household surveys, the rural non-farm sector is associated with lower poverty in many developing MENA countries, but the poor might have difficulties in accessing these opportunities. To ensure poverty programs achieve success in the region, we need to better understand the development of and access to rural non-farm activities. Fascinating. I read this wondering what are non-farm rural activities? Are we talking recreation, falconry/hunting, caravanning? I guess stock trading would count as farming. Very interested to learn more about rural non-farm economy of MENA.

Could you pls provide some examples of non-farm activities that have successfully provided a path out of poverty?