This blog was written prior to the current conflict in Gaza and serves as a reminder of the critical importance of education, regardless of the circumstances, in building a path to a more hopeful future. 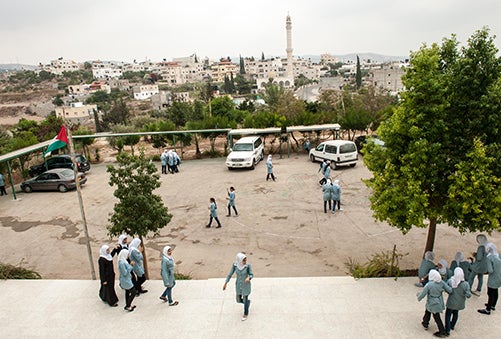 What is Mrs. Abla’s secret? How has one principal managed to mobilize teachers and parents into becoming one harmonious unit with a common goal— to give students the best education they could. Is it just her incredible passion for education? What else has helped her overcome the challenges of daily life in the West Bank to create an environment around her so conducive to learning?
In March, a World Bank team used standards developed by TIMSS—the US-based Trends in International Mathematics and Science Study measuring the math and science skills of American school students against students elsewhere—to identify schools in the Palestinian territories with above average student performance. Comparing high and low-performing classes, the team found “important differences in both how teachers use their time, and how schools are run.” Findings are contained in the June report, Learning from Local Practices: Improving Student Performance in West Bank and Gaza.

Inspired by this and driven by the idea of learning from local success, we visited Kufor Quod Girls Secondary School, near Jenin in the northern West Bank, one of the top performing schools. There we found that, largely through leadership, the principal, Mrs. Abla, had cultivated a vibrant culture of collaboration that began inside the school walls, binding teachers and students together, and extended outward to day-to-day interaction with parents and the rest of the local community.

By spending time with Mrs. Abla, we sought to explore the range of innovative practices that characterized the school, one that, despite the constraining environment that all schools in the Palestinian territories face, has academically outperformed its peers. In 2011, its average TIMSS score in science was 529 and in math 500 for 8th grade students, placing them first and second in the rankings for these subjects in Palestinian public schools.

“Are you consulted on decisions taking place within your school?” This was the first question we posed to a group of teachers, who replied, “Of course we are,” adding the principal had even taken into account their opinion of the colors of classroom curtains. As minor as their answer seems, it spoke volumes about the culture of participation and partnership Mrs. Abla had created.
Simple practices placing a collaborative approach above individual action—frequent staff meetings, parental participation in some class activities, and involvement in monitoring student learning—had all helped create an atmosphere in which high standards, high expectations, and high morale had led to good academic performance. Everyone was proud of their school and everyone enjoyed being there.

One notable aspect  was the internal accountability mechanism between the principal and her staff. For example, the centralized education system in the Palestinian territories that does not quite allow for school-based management (including any principal autonomy over hiring or monetary rewards and bonuses) did not stop her from resorting to other creative non-monetary incentives for constantly incentivizing her teachers. Teachers said they had an amount of autonomy, that there was a widespread sense of trust-worthiness, and a feeling that their efforts were constantly appreciated and praised. Research has shown that non-financial incentives and human resource management strategies such as appreciation, supportive supervision, performance appraisal, career development and community feedback, play as much of a role as monetary rewards in affecting service providers’ intrinsic motivation.

In response to the level of appreciation felt by teachers, their commitment and dedication to Kufor Quod is so strong that they refused to honor wage strikes called on by the Teachers’ Union. When asked why they would do such a thing, one of the teachers shrugged and answered: “Oh, but my conscience would not allow me to not teach to the best of my capabilities”. We then asked: “But imagine you were working in a different school where you did not feel quite as appreciated; would you still do the same thing?” The teacher replied, “No, I would not. It is only natural to give back what you receive in the first place”.

Being brought up in this environment, students get a clear sense, early and often, that their school is centered on them. They are at the heart of this educational process and all efforts are targeted towards securing a better future for them. In their own words, they regarded their teachers as their “friends” and the principal “as a mother-like figure”. Their aspirations for the future varied between becoming a dentist or a lawyer, to an aeronautical engineer or a teacher; they are a testimony to how much human resource potential there is that needs to be tapped, not just in Kufor Quod but in all of the Palestinian Territories.

Of course, Kufor Quod by default enjoyed a favorable environment that made the process of learning relatively easier[1]. However, the small simple things that this one school is already doing are demonstrating what an important role such local innovations can play in increasing students’ performance. Such practices have great potential to help other struggling schools that are not quite there yet to find the space to develop and implement their own solutions to their own particular problems, even as the larger, political challenges remain unanswered.
Perhaps Mrs. Abla’s “secret” is not a secret after all,  but rather it is her innovative approach of setting up an institution inside her school that recognizes and rewards good effort that has enabled her along with everyone else to set an example of what can be done despite all the odds.
[1] Examples of some aspects of this favorable environment include the lack of violence and rare discipline problems in girls’ schools that tend to be more frequent in boys’ schools in Palestine. Additionally, Kufor Quod is a relatively small school that enjoys a high level of parental involvement, as demonstrated by their levels of in-kind and financial contributions to the school.
Topics
Education
Countries
West Bank and Gaza
Regions
Middle East and North Africa
Series
Back to School