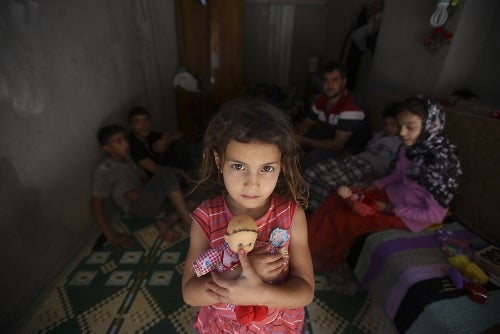 The Syrian Civil War is entering its sixth year with no resolution in sight : Even February’s truce may be collapsing as the battle for Aleppo intensifies. There will be more refugees and casualties as civilians flee the violence. With its aerial bombings, car bombs, chemical warfare, the unparalleled brutality of Islamic State, and unrelenting trauma of urban warfare, Syria’s war has seen half a million deaths, over 4 million refugees, and some 7 million internally displaced peoples (IDPs).

Unsurprisingly, mental trauma affects large numbers of Syrians, whether forcibly displaced or not . A 2015 study by the German Federal Chamber of Psychotherapists estimated that half the Syrian refugees in Germany had mental issues , with 70% witnessing violence and 50% having been victims of violence. Turkish authorities report 55% of Syrian refugees there needing psychological services and nearly half of Syrian families think that they or their families need psychological support . Yet, it is estimated that only 5% of the needed psychotherapy for refugees in Jordan, Lebanon, and Turkey is provided.

International Medical Corps (IMC) undertook a recent analysis at IMC supported health centers serving Syrian refugees and IDPs in Jordan, Lebanon, Syria, and Turkey. The findings underlined the very limited access to mental health services while noting that 54% of the displaced had severe emotional disorders  and 26.6% of children faced intellectual and developmental challenges. The United Nations High Commissioner for Refugees (UNHCR) notes that “the most prevalent and most significant clinical problems among Syrians are emotional disorders, such as: depression, prolonged grief disorder, posttraumatic stress disorder and various forms of anxiety disorders.” Lack of appropriate treatment and continuing high levels of stress worsen their situation. Medical care for those with mental disorders remains out of reach for most.

Children and women confront specific vulnerabilities. In Syria, as well as in host countries, women and girls often face or feel threatened by gender-based violence, including domestic violence, sexual violence, increasing incidences of early marriages, harassment and isolation, exploitation, and survival sex. A quarter of Syrian refugee households are headed by women  and the UNHCR notes,  “Life in exile for these women has meant becoming the main breadwinner and caregiver, fending for themselves and their families, away from their communities and traditional sources of support. For most, the burden is overwhelming, and many are entirely dependent on outside assistance.”

Children, who comprise roughly half the total refugee and IDP population, are not only victims in their own right but many adults report that the well-being and future potential of their children constitute their greatest source of stress… many adults worry constantly about their children and the impact of the horrors they have experienced.” Children also suffer the stress of constantly worrying about their parents and siblings. Post-traumatic stress disorder is the most common problem faced by children with close to 50% afflicted. This is followed by depression and a slew of other psychological challenges. The context in which many live—refugee camps or in poorer urban and rural areas—adds to their stress. Mental health issues have serious long-term implications since children with mental health problems require more resources in school and in transitioning to work. They are also more likely quit jobs and stay unemployed.

In addition, Syria confronts the mental trauma of tens of thousands of combatants (on all sides) and tens of thousands of political prisoners held by the government and by opposition groups, including Islamic State. It is estimated that 65,000 people were forcibly disappeared in Syria between March 2011 and August 2015, many either killed or detained in horrific conditions in security prisons established by the government in Damascus. Similar practices plague the country in areas held by IS and others.

The mental health challenge looms large in Syria with one partially operating mental health hospital, over half of whose doctors and medical professionals have left the country. In Jordan, Lebanon, and Turkey, health care in general remains problematic for the refugees, with mental health resources even more difficult to access. On March 23, 2016 Amnesty International issued a report on the precarious situation of Syrian refugees in accessing health care. Jordan, with a refugee population approaching 20% of its native born population, had to impose new fees in November 2014 for refugees. The fees do provide access to subsidized medicines, but they pose a heavy burden on the refugees, 90% of whom are below the national poverty line. A similar statistic obtains in Lebanon. The latter’s largely private health care system with its high user fees presents its own challenges.

In Turkey, refugees are granted free basic health care once they register with the government , but language emerges as a significant barrier, the more so with mental health. Syrian doctors and other medical personnel can now work in health care facilities to serve refugees, but the scarcity of mental health specialists remains particularly challenging. Another problem is the stigma associated with mental health, posing a further barrier to people seeking care.

The IMC suggests immediate steps, such as making mental health care a part of general health care (a step to ease the stigma of seeking mental health help); ramping up training in mental health care for general health care providers; bridging the language barrier in Turkey via more translators where Syrian staff are unavailable; increasing training of specialized mental health providers; addressing developmental needs of children as a priority; and providing host countries with the resources needed. The sooner host countries and the international community mobilize around this potentially multi-generational challenge, the better off will the refugees be in the short run, and the better prepared will they be to return and rebuild Syria in the long run.
Topics
Fragility Conflict and Violence
Education
Health
Countries
Syrian Arab Republic
Regions
Middle East and North Africa I have an opportunity of sending trained art therapists from USA and Australia to work with refugees in camps of Greece or Turkey. I run a nonprofit (www.procure-art.org), and look for reliable counterparts in the countries to send the help. Kindly put me in touch with organizations on the ground who could assist with the field logistics. Thank you.

Thanks for this article - interesting and heartbreaking