The Enemy Within: Tackling Schistosomiasis in Yemen 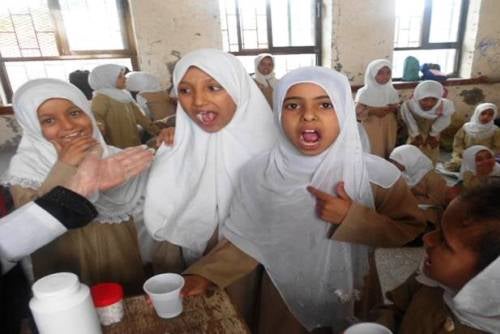 In the unsettling horror movie Alien, an alien invades and hides within the human body, eventually causing great devastation. This is like the real story of the parasitic worm that, within minutes, invades the human body, using its forked tails to burrow into skin. Once inside the human body, it travels through the bloodstream and lives off its nutrients.

The worms carrying the schistosomiasis parasite, also known as bilharzia, which leads to the disease, are able to remain undetected inside the human body for up to 15 years. One worm can lay thousands of eggs a day; some become trapped in body tissues, tearing and damaging internal organs. The consequences on the human body can be devastating.

Schistosomiasis is transmitted through contaminated  fresh (not salty) water, with people usually contracting it doing daily chores,  such as washing clothes, caring for their land, or herding animals. After the eggs have reached the water and hatched, they infect snails to transport them.. When the snail releases the parasites, a new cycle of infection can begin.

School-age children are especially vulnerable to schistosomiasis because they play in infected water. They also suffer the greatest side effects, such as anemia, stunted growth, impaired cognitive development, and at times, premature death.

This is far from being a new disease; traces of the late stages of the disease have been found in 3,000-year-old mummified bodies in Egypt and to this day it kills more than 200,000 people globally a year. In 2012, more than 42 million people were treated for schistosomiasis while almost 250 million required preventive treatment. The parasite is prevalent in tropical and sub-tropical areas in Africa (where 90 percent of those infected live), as well as the Middle East, Asia, South America, and the Caribbean. Despite being second only to malaria in terms of prevalence and impact though, it remains relatively unknown. For this reason, it is one of the diseases that will be highlighted during this year’s World Health Day on April 7, which is focusing on Vector-Borne Diseases.

A disease of poverty

Schistosomiasis is sometimes called “a disease of poverty” since it primarily affects poor and rural communities who lack access to safe water, have poor sanitation, and inadequate access to public health programs and healthcare services. For communities already fraught by poverty, such as most of the population of almost 24 million in Yemen, the disease can weaken the body's resistance to other infections while reducing productivity and a child’s long term physical and cognitive development.

In Yemen, as in many other countries across the Middle East, households shoulder most of their own healthcare costs. Even if they are sick, poorer households have to make a difficult choice between spending on health or other basic things, such as food. In Yemen, an additional factor kicks in, the lack of enough health facilities and healthcare workers for the largely rural population.

The World Bank has responded  by financing nationwide health projects for poor and rural communities, which are very much part and parcel of the World Bank’s recent Health Strategy for the Middle East and North Africa (Fairness and Accountability: Engaging in the Health Systems in the Middle East and North Africa): diseases of the poor need to be tackled, and the health needs and rights of the poor need to receive an equitable response."Our engagement in schistosomiasis control, and more recently its expansion to include other parasitic and vector borne diseases in Yemen is not just about eliminating the disease, but it is about providing a healthy head start to its children for equal opportunity in life,”says Enis Baris, Human Development Department Director at the World Bank. 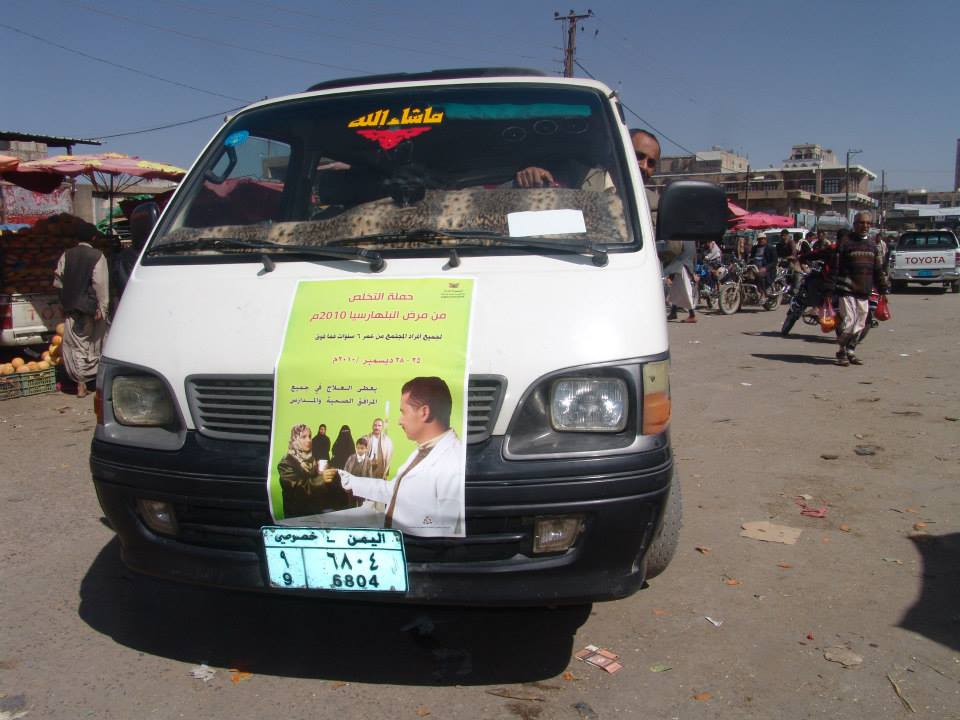 The U.S. Center for Disease Control and Prevention called schistosomiasis “the world’s most deadly, neglected tropical disease”: this is no longer the case in Yemen. It is being tackled and the prevalence of the disease has been radically reduced since the World Bank scaled-up its national control program.

Schistosomiasis has been a leading cause of death, after malaria, in Yemen, with an estimated three million cases of infection. During the past three years, the Yemeni health authorities—with financial and technical support from the World Bank[1], the World Health Organization (WHO), and the schistosomiasis Control Initiative—have distributed more than 45.5 million doses of the drug praziquantel[2] to mainly school-age children.

Treatment will be expanded to millions more. Awareness campaigns were also held as part of the effort. Infection rates have dropped by more than half as a result.[3] Building on this, the scope of addressing diseases related to poverty has been expanded to look at treating soil transmitted infections and eye trachoma as well.

To fully understand the significance of the success of fighting this disease, it is important to be aware of the context. Yemen is in an almost perpetual state of turmoil economically, demographically, and in terms of domestic security. At the same time, it is affected by regional tensions. Illiteracy is about 70% for women, roughly double that of men. Yemen’s mountainous terrain is makes outreach efforts difficult.

Despite this, the government, other stakeholders, and communities persevered, their success attributed to several factors—most noticeably, community mobilization. Local communities took part in micro-planning exercises for the campaign, securing community ownership and tailoring outreach efforts, as well as distributing drugs and information, and setting-up health care sites.

Religious leaders, community leaders, teachers and health care providers, all spread the word about the disease and the treatment available for it. Messages were broadcast on television and radio before and during the campaign.

Mobile health teams worked hard to reach these populations, and female health workers and volunteers helped encourage girls and women to visit the health stations. Through massive community mobilization of 30,000 community members and health workers, a record-breaking 9.6 million people were treated for schistosomiasis and soil-transmitted diseases in two separate four-day public health campaigns. This was compared to the 1.9 million Yemenis treated during the whole of 2012.

Yemen health campaign staff shared information on loudspeakers in markets and bus parks. Posters displayed basic information and where to receive treatment. The commitment and collaboration between the Yemeni Government, World Bank,[4] WHO, and the Schistosomiasis Control Initiative, contributed to the overall success of the campaign. 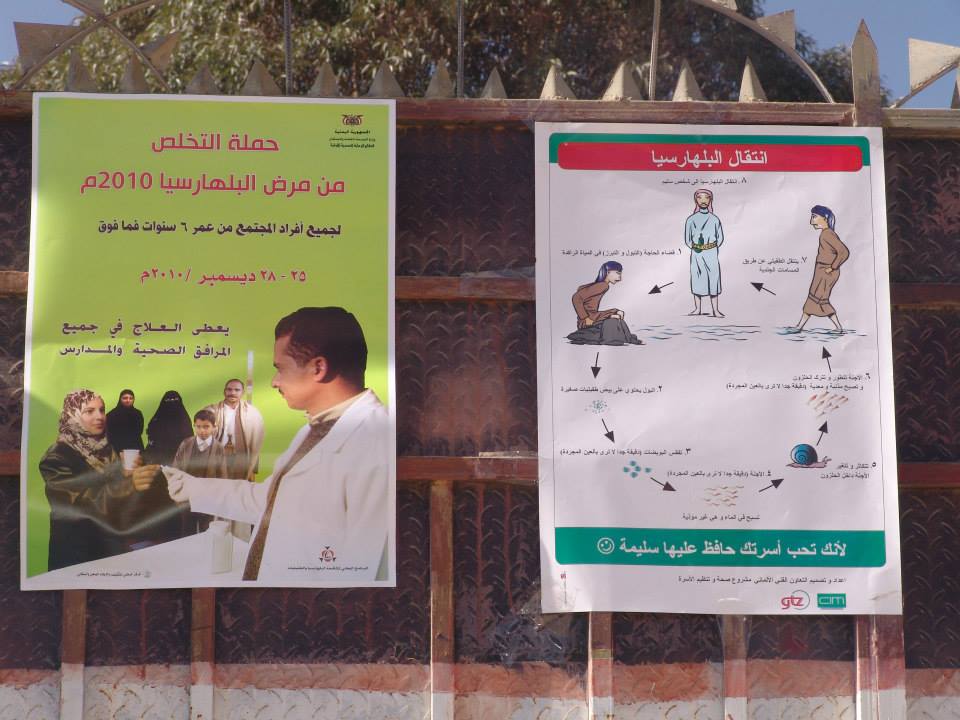 Although Yemen has taken huge strides toward curtailing schistosomiasis, efforts need to continue beyond the lifespan of this national project. Since there is no vaccine to prevent re-infection, massive drug distribution, combined with public awareness, has to remain part of the strategy to keep schistosomiasis at bay.

The government also needs to build on its successes in community mobilization and mobile health provision to reach people in remote rural locations, an approach that could be scaled up and built upon as part of a national health strategy. It also needs to motivate health workers and communities to continue to battle against the disease.

Behavioral change will be needed, as well as finding measures to reduce occupational and recreational contact with contaminated water. Access to safe water needs to be improved, as well as sanitation. A more difficult challenge is to find ways safe ways to eliminate the snails, which maintain the worms’ life cycle.[5]

[1] The Yemen Schistosomiasis Control Project was launched in 2010 and is supported by a US$ 25 million grant from the World Bank; its completion is due in 2016.
[2] The infection can be treated fairly effectively with the drug “praziquantel.”
[3] According to an independent impact evaluation conducted in selected sentinel districts, infection levels collected from 2000 individuals have fallen by more than half since the beginning of the project, from 20% at baseline to 8%, with less than 4% harboring severe infections.
[4] The World Bank operated by handing over all the implementation responsibilities to the government, which helped build the capacity and institutionalization of the model across all levels.
[5] Chemicals used to eliminate snails in freshwater sources may harm other species of animals in the water and, if treatment is not sustained, the snails may return to those sites afterwards. Some countries have tried introducing shrimp in snail infested waters in orders to reduce the number of snails, which is a safe measure. The experiment outcomes and results have not yet been evaluated.
Topics
Education
Health
Poverty
Water
Countries
Yemen
Regions
Middle East and North Africa