Why is #COP21 important for the Middle East and North Africa region? 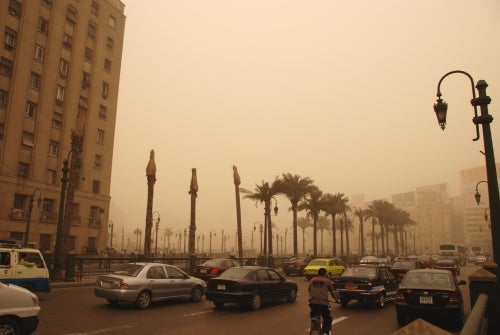 Over 25,000 people have descended on the Bourget in the suburbs of Paris to attend the much anticipated 21st Conference of Parties on climate change, or “COP21”. The first meeting today is due to be attended by 120 heads of state including 11 from the Middle East and North Africa (MENA). But what is the convention about, really?

It all started in the Brazilian capital of Rio de Janeiro during the 1992 Earth Summit, when the UN Framework Convention on Climate Change, or UNFCCC, was adopted. This near universal agreement, recognizing climate change as a threat, has been endorsed by most countries in the world (more than 190 of them). Every year now, parties to this agreement meet to review the implementation of the Convention; that is why it is referred to as the Conference of the Parties (COP). 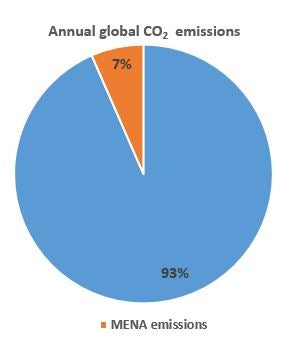 The objective of COP21 in Paris is to get everyone to agree to keep global emissions low right until 2050 to make sure global warming rises no more than by 2oC worldwide. The goal is to stabilize concentrations of greenhouse gases at a level that will prevent “dangerous interference” with the climate system.

Countries have agreed to submit targets to limit their greenhouse gas emissions—this is referred to as the Intended Nationally Determined Contributions (of greenhouse gases), or INDCs. As of today, more than 170 countries have submitted their INDCs, including 16 countries in the Middle East and North Africa (MENA).

What are MENA’s contributions to climate change? MENA contributes about 7% of the total annual 32 Giga tons of carbon dioxide (CO2)  emissions (see pie chart). China, India and the US are the three largest contributors, jointly emitting almost half of global CO2. 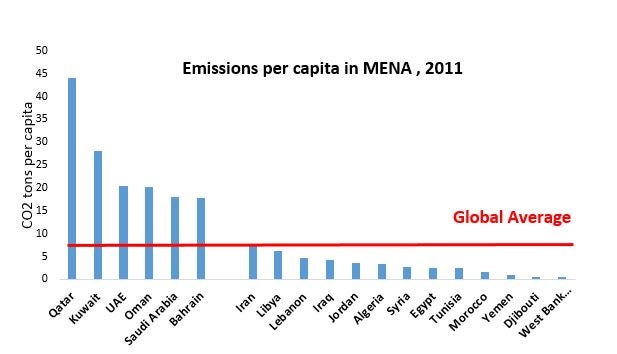 A region’s total emissions do not tell the whole story. While China, India, and the US emit 17 times more carbon dioxide than the Arab Gulf countries , per capita they emit about 4 times less. In MENA, there are stark regional differences (see bar chart). The citizens of the Gulf have the largest emission footprint in the world, while the citizens of most other MENA countries have a gas emissions footprint well below the world average.

The six Gulf countries are among the world’s top 10 per capita emitters . To put it in perspective, one Kuwaiti, Emirati or Omani emits as much as 10 Egyptians, Tunisians or Moroccans . The most extreme contrast in the region is the emissions produced by one Qatari equal those produced by 73 Djiboutians or Palestinians .

Despite not being the largest emitting region, MENA is already under severe heat and water stress with little margin for adaptability. Compared to the rest of the world, the MENA region will suffer disproportionally from extreme heat. A previous blog mapped out the kind of future the region could face if concerted action is not taken. Therefore the stakes for MENA in Paris are high. 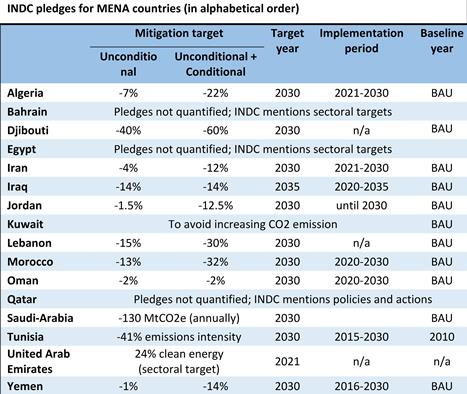 The pledges show a wide array of ambition, but it hard to compare targets between countries as the benchmarks are not harmonized. The World Bank is currently developing a tool that will help countries harmonize and compare their pledges.

Nevertheless, one can cautiously infer that the most ambitious countries in terms of limiting greenhouse gas emission in MENA are: Djibouti, Lebanon, Morocco and Tunisia. Funnily enough, though, these are also among the countries with the least emissions! A very nice and informative write up.

Maria, thanks for this, very insightful.
What is your take on the intersections of gender and climate - Mary Robinson reported that some countries from the region are opposing the inclusion of language on gender equality in the proposed COP21 text - http://www.theguardian.com/environment/2015/dec/08/cop21-is-too-male-do…

Maria,
Very informative summary of the situation in MENA. It is interesting to note that the situation of these countries is somewhat out of their control since the impact of global climate change is likely to hit them hardest.