Yemen: so critically short of water in war that children are dying fetching it 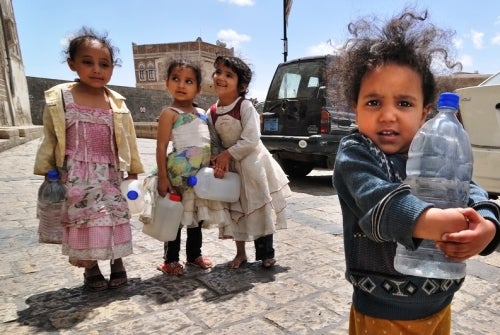 Before the ongoing war, Yemen was already among those countries facing the most serious water shortages: experts warned that its groundwater would be depleted by 2017. The war has greatly exacerbated the situation as, along with instability, the absence of government, and spread of armed conflicts, the arbitrary pumping of groundwater has increased while government utilities like water supplies have collapsed.

Previously, Yemen’s Ministry of Water said a law prohibited the arbitrary drilling of wells. This was enforced by the security services and local councils; a permit had to be obtained before any well could be drilled. But the instability of the past year has led to chaos, and a large number of wells have been drilled in many regions.

The city of Ta’iz in southern Yemen is one of the hardest hit areas. Piped water used to flow into people’s homes only once every 40 days. After the war began in March 2015, the state water utility stopped pumping water to people’s homes altogether. As a result, despite the armed conflicts, hundreds of small children in Ta’iz leave their homes to bring water back in jerry cans . The water, referred to as “street water”, is often provided by mosques or charities or civil organizations. Many children have been killed or injured in fighting as they leave their homes in search of water.

“Now that the schools are closed, my mother sends me to get water from the neighborhood mosque or from the barrels in the street,” said 8 year-old Mira Hazzam. “I go out five times in the morning and twice in the afternoon, sometimes with my mother and sometimes alone, to bring water from the mosque, which has water taps or faucets outside. When we heard that some children had been killed fetching water, my mother wouldn’t let me go out for two days, but then she asked me to go again when there was no water left to drink or wash the clothes.”

Reports by international organizations confirm that Ta’iz is suffering from a severe and protracted water crisis , which has become even more severe as a result of the armed conflicts in the city.

Ta’iz’s residents have no water or electricity , according to a report by the Humanitarian Relief Coalition in Ta’iz. And the 1.6 million people in Ta’iz governorate are in need of emergency provisions of drinking water . According to local activists, the price of water brought in by tanker trucks has increased threefold ; the trucks require four or five days to deliver the water throughout the city. The report adds that the city’s residents depend for their drinking water on relief assistance provided by local and international organizations, which distribute water in the neighborhoods using cistern trucks.

The local organization, Generations Without Qat, said that in mid-March of this year it began implementing the second phase of a project to distribute drinking water to the population of Ta’iz. The project will distribute 99,000 liters of potable (drinkable) water on a daily basis to 33 areas, at the rate of 3,000 liters per area, over a period of four months.

But the water crisis is not limited to the city of Ta’iz. A number of other regions in Yemen are experiencing severe shortage of waters for drinking , agriculture, and other uses, as well. The crisis is deepening with every day the year-long war continues. Thank you for shedding light on this alarming water crisis in Yemen...

Thank you Farouk for sharing this powerful image of the dangers of water fetching in Yemen. This should serve to ignite efforts on many levels to bring peace and development to fragile and conflict-affected states everywhere.

Hello Farouk, I would like to discuss this topic further with you for an academic report. Can you please contact me at [email protected] ?
I can't find your contact details anywhere.