Auctions, a winning bid for the Nobel prize, development and climate?

What do Leonardo da Vinci’s Salvator Mundi, a 5G cellphone network, and carbon emissions have in common? The answer: auctions.

Up until the 1990s, governments tended to award goods and services such as spectrum licenses in a suboptimal fashion, often through consultations or lotteries. These did not generate significant benefit for taxpayers.

Drawing on the work of two Stanford economists, Paul R. Milgrom and Robert B. Wilson, the idea of making private companies compete against each other during public auctions was rapidly recognized as a more efficient way to allocate public goods. Today, governments often use auctions to allocate or purchase public goods and services. And in 2020, the economists won the Nobel prize in Economics for their innovative work on auction theory and auction formats, which benefitted sellers, buyers and taxpayers around the world.

From economic theory to climate practice

Some of the key innovations from their work are also instrumental in shaping effective tools to address climate change.

For instance, in a single round sealed bid auction participants tend to bid lower than their own valuation for the product for fear of paying too much, a phenomenon known as the winner’s curse. The work of Wilson and Milgrom shed light on how the winner’s curse could be mitigated and a better result could be achieved through auction design elements such as a multi-round bidding format, which allows bidders to place bids over multiple rounds where each bidder could receive information related to other bidders’ bids at the end of each round. These techniques were successfully applied in auctions of radio frequencies for cell phone networks in the 1990s. Similar types of auctions, regularly held around the world today, generate billions of dollars of revenue for taxpayers.

In the environmental space, many countries auction off permits for companies to emit carbon dioxide, recognizing that the available remaining carbon budget is limited if the world wants to keep global warming to well below 2 degrees, based on the outcome of the Paris Agreement. As we get closer to reaching the point where no additional emissions should be released in the atmosphere, these permits will become more expensive and sought after, reflecting a market price for greenhouse gas emissions.

Through our Climate Auctions Program and the Pilot Auction Facility, the World Bank, in collaboration with partner countries (Germany, Sweden, Switzerland and the USA), has applied the price discovery framework to improve the efficiency of auctions for greenhouse gases emissions reductions. These auctions feature a multi-round clock auction format where bidders participate in a series of rounds during which they submit bids for a quantity of future emission reductions that they are willing to sell at a given price level announced by the auction manager. At the end of each round, the auction manager reveals the aggregate supply at that price level. If there is more supply bid in aggregate across all bidders than the demand of emission reductions specified to be procured, the price will tick down and a new price for the next round will be announced, and this process continues until supply no longer exceeds demand. 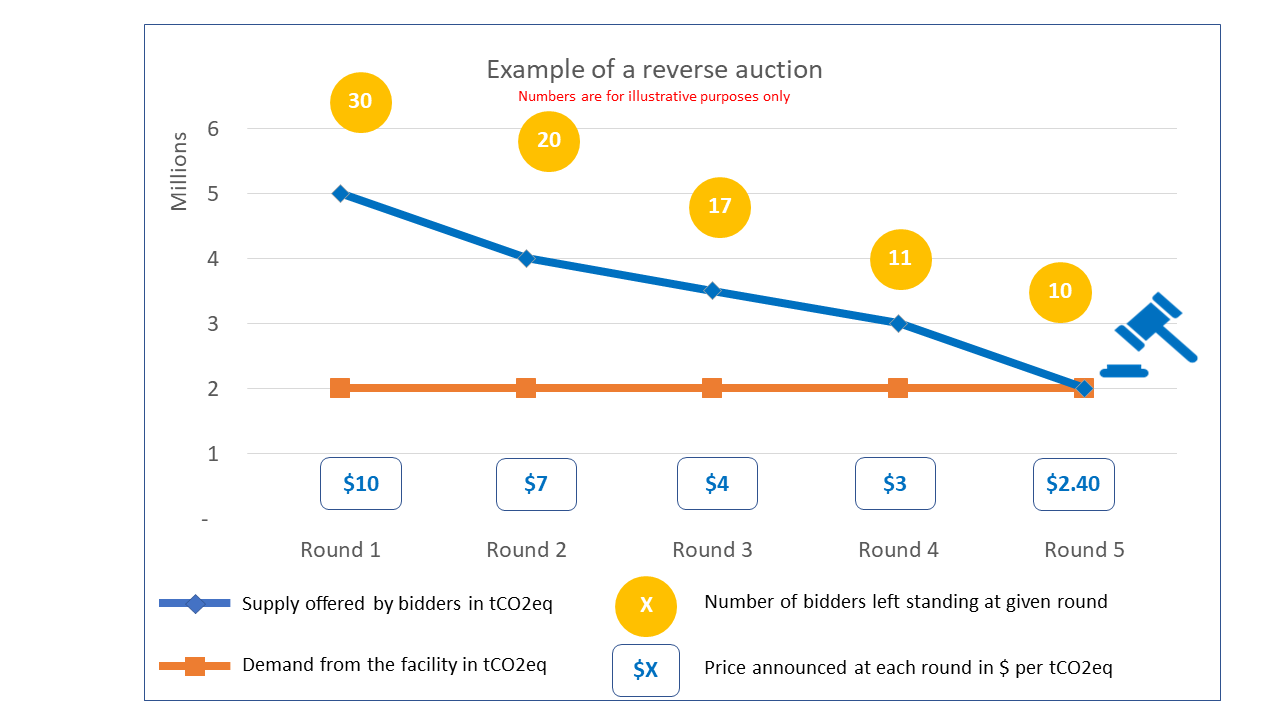 Fig. 1 - Example of a reverse auction

These programs then allocate public subsidies to green projects that reduce greenhouse gas emissions around the world.

In a traditional transaction, these subsidies would have been awarded to projects that submitted a grant application and would have been chosen using a selection process that include the submission of a sealed bid. Competitively auctioning the subsidy instead, helps direct the funds towards the most cost-efficient projects and reduce more greenhouse gases than what would have been achieved with the same amount of money in a grant application process. It’s a win-win situation, for public funders who get the most bang for their buck, for the planet, and for the projects who receive financing in a transparent way.  The auctions are an efficient and fair way to select multiple Sellers, determine a market reflective price and mitigate the winner’s curse for those selected.

A wider applicability for auctions in climate action

The applications of this model have been identified by the Intergovernmental Panel on Climate Change as a tool with great potential to spur private investment in green projects. The World Bank, governments in Australia, the UK and others also use or plan to use auctions to support countries and companies reduce greenhouse gas emissions, including Methane and Nitrous Oxide emissions.

The specific framework for the auctions conducted by the Bank from 2015 to 2020 could also be replicated by governments with a limited budget desiring to achieve climate objectives. For instance, it could be used to incentivize specific sectors to reduce emissions before the adoption of a nationwide regulation such as a carbon tax or an Emissions Trading Scheme. A dedicated interactive training module is available on the World Bank open learning campus.