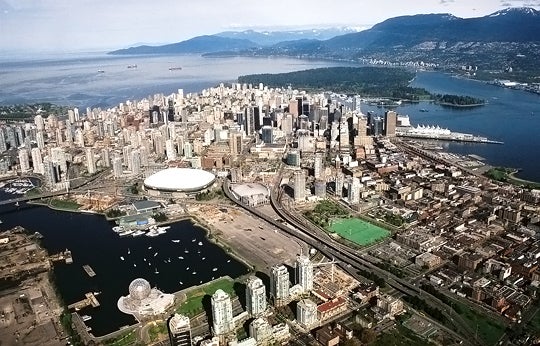 We often hear claims that a carbon tax would destroy jobs and growth. Yet the evidence from a Canadian province that actually passed such a tax – British Columbia – tells a very different story.

The latest numbers from Statistics Canada show that B.C.’s policy has been a real environmental and economic success after six years. Far from a “job killer,” it is a world-leading example of how to tackle one of the greatest global challenges of our time: building an economy that will prosper in a carbon constrained world.

Implemented on July 1, 2008, B.C.’s tax covers most types of fuel use and carbon emissions. It started out low (C$10 per tonne of carbon dioxide), then rose by C$5 each year, reaching C$30 per tonne at present (about 7 cents per litre of gas). "Revenue neutral" by law, the policy requires equivalent cuts to other taxes.  In practice, the province has cut $760 million more in income and other taxes than needed to offset carbon tax revenue.

The result: taxpayers have come out ahead. B.C. now has the lowest personal income tax rate in Canada (with additional cuts benefiting low-income and rural residents) and one of the lowest corporate rates in the OECD. You don’t need an economist and a mining entrepreneur to tell you that’s good for business and jobs.

At the same time, it’s been extraordinarily effective in tackling the root cause of carbon pollution: the burning of fossil fuels. Since the tax came in, fuel use in B.C. has dropped by a whopping 16 percent (counting all fuels covered by the tax). To put that accomplishment in perspective, Canada’s Kyoto target was a 6 percent reduction in 20 years.

And the evidence points to the carbon tax as the major driver of the change.  B.C.’s big drop in fuel use … 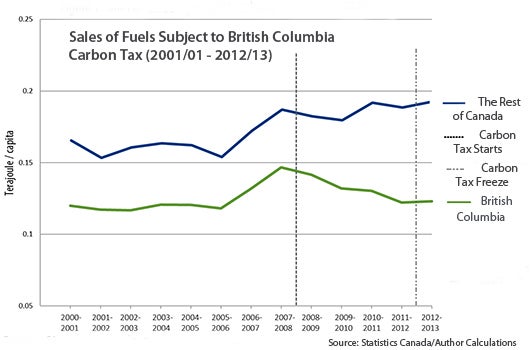 In other words, the evidence indicates that B.C.’s carbon tax has been very effective in spurring fuel efficiency gains. (For more details, see www.sustainableprosperity.ca )

Further, while some had predicted the tax shift would hurt the province’s economy, in fact B.C.’s GDP per capita has slightly outperformed the rest of Canada’s since 2008.

With these impressive results, B.C.’s carbon tax has gained widespread global praise as a model for the world – from places like the OECD, the World Bank, and The Economist. But within Canada (outside B.C.) it is less heralded, which is a shame. Because when you look beyond the political rhetoric and examine the facts, B.C.’s experience offers powerful, positive lessons for the world.

In particular, it shows that countries can be competitively ambitious in shaping a 21st century economy that internalizes the real costs of pollution. And that is important, because carbon and other emissions from burning fossil fuels impose heavy costs on us all, as B.C. knows well. The mountain pine beetle infestation, resulting from warming winters, has devastated its interior forest industry, closing mills and costing thousands of jobs. Similarly, air pollution – caused mainly by burning fossil fuels – costs thousands of lives and over $8 billion per year to Canada’s economy. These problems will only get worse if we don’t get serious about tackling the causes of carbon emissions.

B.C.’s example shows that we can do that, while strengthening the economy, if we use smart policies. In particular, carbon tax shifting encourages employment and investment (by cutting income taxes) and discourages pollution (by taxing emissions). It also promotes energy efficiency and clean innovation – both critical to success in the greening global marketplace.

Building a prosperous, low carbon economic future is one of the great challenges of our time. With such strong evidence of how to do that, it’s time to park the political rhetoric and act. Professor of Law and Economics

Taxes can be an effective tool to further social policy (reducing people's use of fossil fuels in this case), but they exist to provide revenues to support important government services. While the revenue-neutral aspect of this tax surely made this legislation more politically palatable to many, the more effective this tax is at curbing fossil fuel use the less viable it is as a sustainable way to fund government. I fully support carbon taxes, as well as the creative way this one was made more acceptable - but the revenue-neutral element could create issues down the road as revenues from this carbon tax decline.

Taxes, even revenue-neutral taxes, shift spending. In this case, as less money is being spent on dirty energy, the money saved will be spent on other goods and services generating more tax revenue. This is especially relevant when it comes to personal vehicle use. Electric cars are making a headway against internal combustion (ICE). The money spent per mile driven for EV vs. ICE is approximately 20%. Here in the U.S., we spend over half a trillion dollars for gasoline every year.
Once all cars are running on renewable electricity instead of gasoline or diesel, the savings to consumers will be over $400 billion per year. This money will still be spent, but instead of going to the oil companies, it'll be spread across a much broader sector of the economy generating millions of jobs over time.

Hopefully, by the time the decline begins there has been enough movement in growth of renewables to benefit the economy in general...

I would like to see BC government use Carbon Tax to improve the environmental instead of rebating the tax the Carbon Tax payer.

The article says that carbon emissions have been reduced thanks to the carbon price. Doesn't that mean that the carbon tax has been successful in improving the environment?

Great but stating the obvious that many of us have known for years.
The question is not about what system can work, but about political courage to face carbon rich industry lobbyists and pressure groups, in the US but also in most emerging countries.
Lack of political courage gave way to complicated and impractical carbon credit systems which has failed so far to show significant results.
Let's hope the BC example will pull others into carbon taxes ...

Unlike the author, I actually live in BC (Vancouver) and what isn't mentioned in this post is job creation (or lack thereof). Manufacturing in this province has been neutered since the carbon tax has been introduced. All sorts of good plant manager/controller, operator jobs have been sent to Ontario and other parts of Eastern Canada. Con Agra foods used to have multiple plants on Annacis Island (a large manufacturing hub in Metro Vancouver) and have moved all but one of their plants to Utah and Washington state. Annacis island is basically a ghost island compared to 10-11. Not everyone can and wants to work at Hoot Suite. The sad, but seemingly true, phrase at SFU (the local university i'm at) is "if you want to get a good job, move out of BC." If you ask many businessmen in fields that actually produce something, the common response is the high level of two things, Carbon Taxes and WCB taxes.
In my opinion, this article fails to mention any of the downsides of the carbon tax.

success on paper, nothing different in real everyday life.

But that is a success. Part of the ongoing fear of introducing carbon reducing social policy is that it will impact the lives of citizens. If the citizens do not notice the change, but the accounting says that there is an improvement in GDP and reduction in carbon emissions then low makers have no excuse for not introducing these measures.