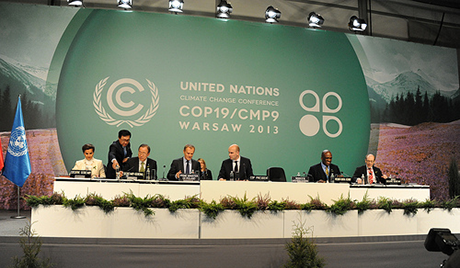 At the UN climate talks that ended wearily on Saturday night in Warsaw, negotiators showed little appetite for making firm climate finance commitments or promising ambitious climate action. But they did succeed, again, in keeping hope alive for a 2015 agreement.

The final outcome was a broad framework agreement that outlines a system for pledging emissions cuts and a new mechanism to tackle loss and damage. There were new pledges and payments for reducing deforestation through REDD+ and for the Adaptation Fund, however the meeting did little more than avoid creating roadblocks on the road to a Paris agreement in 2015. In one of the few new financial commitments, the United Kingdom, Norway, and the United States together contributed $280 million to building sustainable landscapes through the BioCarbon Fund set up by the World Bank Group.

At the same time, COP19 was an increasingly emotional Conference of Parties to the UN Framework Convention on Climate Change. The overture to this round of climate drama was provided by Typhoon Haiyan. Haiyan added, sadly, more to the mounting evidence of the costs of failure in tackling climate change. The language is inexorably moving towards one of solidarity, of justice. But for the moment, this framing is insufficient to prevent emission reduction commitments from moving backwards.

And yet again, as was the case in the climate conferences in Cancun, Durban, Doha, and now Warsaw, outside the official negotiations, there is growing pragmatic climate action driven by climate leaders from every walk of life.

The sense of urgency and opportunity is building, it just fails to translate into textual agreement.

In the World Bank Group, we have focused on evidence to support action, and in Warsaw we were able to bring new evidence and data to the table on disaster resilience, helping cities become creditworthy to grow smarter, working at the landscape level and the science behind climate-smart agriculture, and, as part of the Climate and Clean Air Coalition, our new work to build a pay-for-performance finance platform to bring to market projects that reduce methane emissions, a short-lived climate pollutant.

In Warsaw, more than in other COPs, in the corridors, the discussions were about the retooling of economies. In discussions on how we would mobilize the talisman figure of $100 billion in climate finance, the conversation moved easily to the fiscal policies and subsidies that too often undermine climate goals. The discussions on how to use precious public climate finance to attract investment from institutional investors and pension funds moved to include how, if climate poses a systemic risk to long-term growth and competitiveness, we would bring the science, data, and evidence to those with responsibility for economic health at a national and international level more purposefully than has been done before outside the World Bank Group.

In Warsaw too, after a decision one year ago in Doha on the role gender plays in climate, several powerful women stand out as advocates for action. Mary Robinson, through the Mary Robinson Foundation for Climate Justice, has been fearless for many years in raising the role women play in solutions as well as the gender differences in the impacts. She has been joined over the years by powerful women playing a role as hosts, from Connie Hedegaard to Patricia Espinosa to Maite Nkoana-Mashabane. Christiana Figueres, as the first woman Executive Secretary of the UNFCCC, is a powerful symbol for many.

In the halls and corridors at Warsaw, the sense of urgency and practicality was embodied, increasingly, by women.

Brazil Environment Minister Izabella Teixeira called for "fifty shades of green." She argues that we need multiple approaches to addressing the climate challenge, and most of them require moving away from entrenched positions and focusing on what works in each sector of the economy.

Lindiwe Sibanda, Chair of the Food, Agriculture and Natural Resources Policy Analysis Network (FANRAPAN) and the International Livestock Research Institute (ILRI) and an eloquent advocate for evidence-based decision making and integration, argued for agriculture to be included in any global agreement because it is both a cause of climate change and part of the solution, and because it makes sense.

Secretary Lucille Sering, Vice Chair of the Climate Change Commission of the Philippines, was everywhere at the Warsaw COP. Her frustration at the international community’s ability to regulate emissions was masked by a calm determination to drive environmental action. Her passion is informed by her own experience. She knows first-hand the impact of extreme weather and the tragic human and financial losses that follow.

These women are looking for solutions that build resilience and enable farmers, foresters, fishermen, women, and the urban poor to prosper and economies to grow.

We know that an African farmer will practice climate-smart agriculture, not because it reduces emissions, but because it puts food on the table and cash in his or her pocket. Recognizing the economic imperative for climate action is vital. If the World Bank Group can help countries identify the low-carbon growth patterns that deliver local needs for jobs and resilience, we can make a major contribution to tackling the climate challenge.

There are thousands of Izabellas, Lindiwes, and Lucilles. Radically pragmatic, if they are supported and support each other, future gatherings in Lima and Paris will do more than tread water. We will be able to plunge forward, perhaps against the tide to begin with, but the tide will turn.