If you’re reading this, it’s likely that going about with your daily life is impossible without electricity. And yet, many face this exact challenge. In Sub-Saharan Africa (SSA), 6 out of 10 people did not have access to electricity in 2016. This problem is not just confined to rural areas; a quarter of those without electricity in the region live in urban zones.

Supply-side impediments to grid electrification in SSA have been widely discussed - such as the lack of generation capacity. Demand-side challenges, on the other hand, have not gathered much consideration even though they are arguably the biggest obstacle to greater electrification according to a World Bank study. Another analysis reveals that pure demand-related factors account for about two-fifths of the access gap in SSA.

As SSA is the fastest urbanizing region and urban electrification rates vary significantly across countries (Figure 1), it is important to determine what promotes (or hinders) electrification from the perspective of end-users. We present below three factors that are likely to influence households decision to connect to the grid, with a focus on cities - where grid extension remains the main pathway to electrification.

1. Power outages can discourage households from connecting to the grid

One of the variables that can influence end-user behavior is reliability. Many firms and households that are already connected to the grid in SSA face regular blackouts. At the same time, research shows that a reliable power supply increases grid connections. We further examine this finding using the power outage measures of Doing Business. Controlling for income, we find that blackouts are negatively associated with urban electrification rates. A recent World Bank study finds a similar result (Figure 2); where the percentage of households having access to reliable electricity is high, so is the electricity uptake rate (i.e. the share of households in proximity to the grid that is connected).

A possible interpretation is that countries that suffer from blackouts typically have a weak infrastructure and less capacity to issue new connections. A second possible explanation is that households are more reluctant to connect to the grid if the supply of electricity doesn’t meet their need. Intuitively, this makes sense. If electricity provision is unreliable, the potential benefit from investing in an electrical connection becomes unclear. Moreover, poor grid reliability means a continued reliance on inferior lighting alternatives (e.g. wood fuels). In such cases, the connected household will need to pay for two energy sources as there is often a monthly fixed charge levied by utilities. A study on India has shown that this extra cost can deter households from connecting to the grid.

A second demand-side variable that is important to consider is the cost of electricity. The World Resource Institute lists “reasonably priced electricity” as one of the strategies for expanding access to electricity services. The difficulty then lies in determining at what price point electricity becomes “affordable”.

Again, there are two interpretations. Countries with poor grid penetration likely need costly infrastructure investments, which can be partly financed through higher tariffs. The second explanation, from the demand-side, is that high tariffs translate into considerable energy bills and may deter consumers from obtaining a formal connection. In other words, if households cannot afford electricity, then they will not bother to connect to the grid. 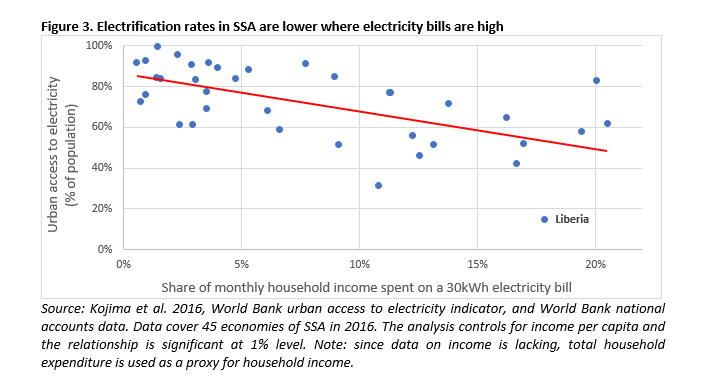 The last demand-side variable that can hamper electrification is the cost and complexity of the connection process itself. A study in Kenya finds that there is such a negative association. Analysis of urban electrification rates in SSA further shows that countries with higher costs, times and procedures to connect to the electricity grid have lower electrification rates. Figure 4 illustrates this; there is a positive association between the Doing Business (DB) Getting Electricity score and urban electricity access rates in SSA.

The contrasting cases of Guinea Bissau and Rwanda cannot be explained by a single factor. For example, when generation capacity is lacking, like in Guinea-Bissau, a vertically integrated utility (which is still the most common power structure model in SSA) may delay new connections until infrastructure investments catch up with consumer demand. At the same time, administrative barriers, red-tape and the costs to connect to the grid also likely influence demand. And because households are typically responsive to connection costs, policy-makers seeking to expand grid development should be wary of whether users can actually finance electricity connections. 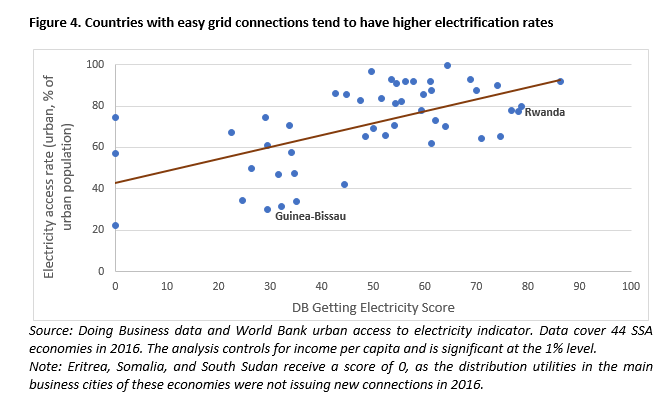 Increasing access to electricity requires policies that focus on the services end-users receive from distribution utilities – not just supply-side factors. For example, evidence suggests that tariff levels, reliability, and the complexity of the connection process impact consumer behavior. In the end, strategies to expend grid penetration need to acknowledge that both supply and demand obstacles are important, as well as interlinked.