The challenges of informality

Download The Long Shadow of Informality: Challenges and Policies

The informal sector — labor and business that is hidden from monetary, regulatory, and institutional authorities — accounts for about a third of GDP and 70 percent of employment (of which self-employment is more than a half) in emerging market and developing economies. While offering the advantage of employment flexibility in some economies, a large informal sector is associated with low productivity, reduced tax revenues, poor governance, excessive regulations, and poverty and income inequality.

Addressing the challenge of pervasive informality will require comprehensive policies that take into account country-specific conditions.  Initiatives to boost long-term development might include measures aimed at reducing regulatory and tax burdens, expanding access to finance, improving education and other public services, and strengthening public revenue frameworks.

One-half of the world’s informal output and 95 percent of its informal employment is in emerging market and developing economies. Both informal output and employment have declined since 1990, particularly in countries with higher output growth, rapid physical capital accumulation, and larger improvements in governance and business climates. 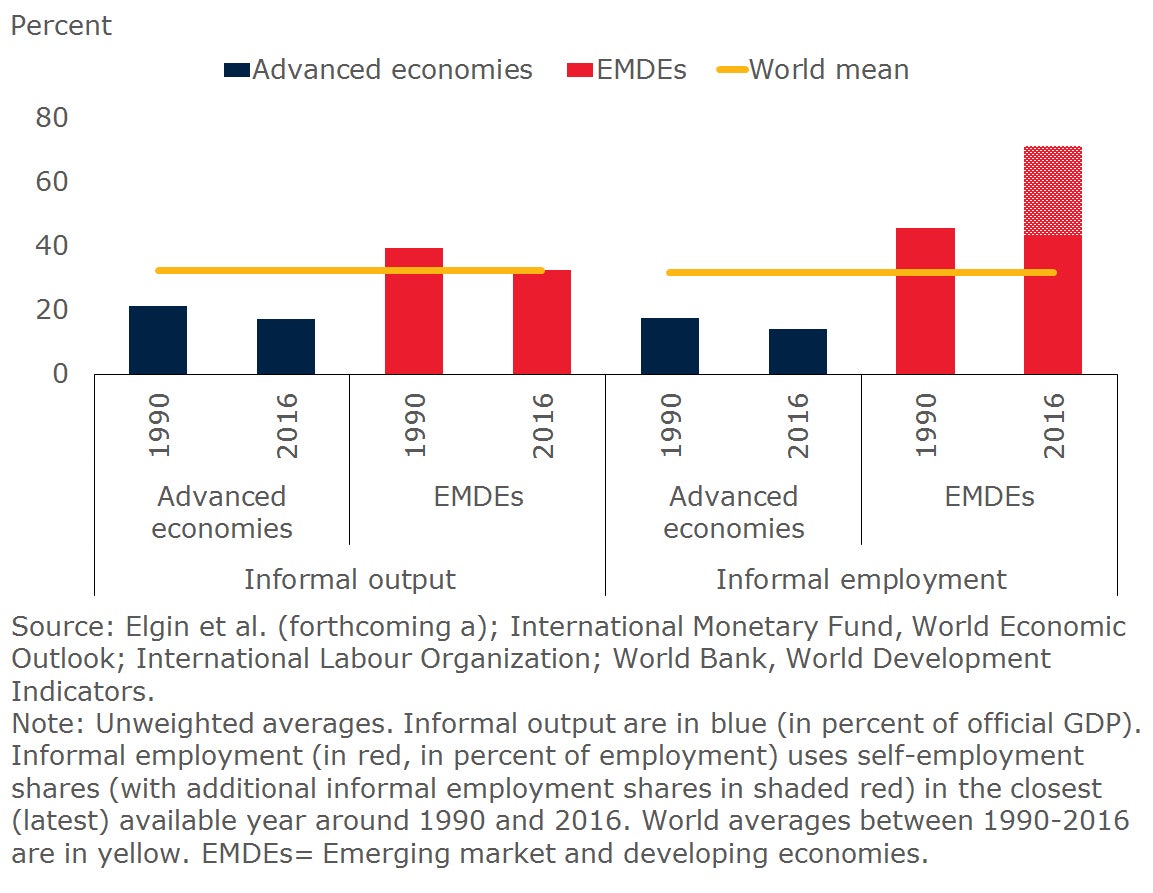 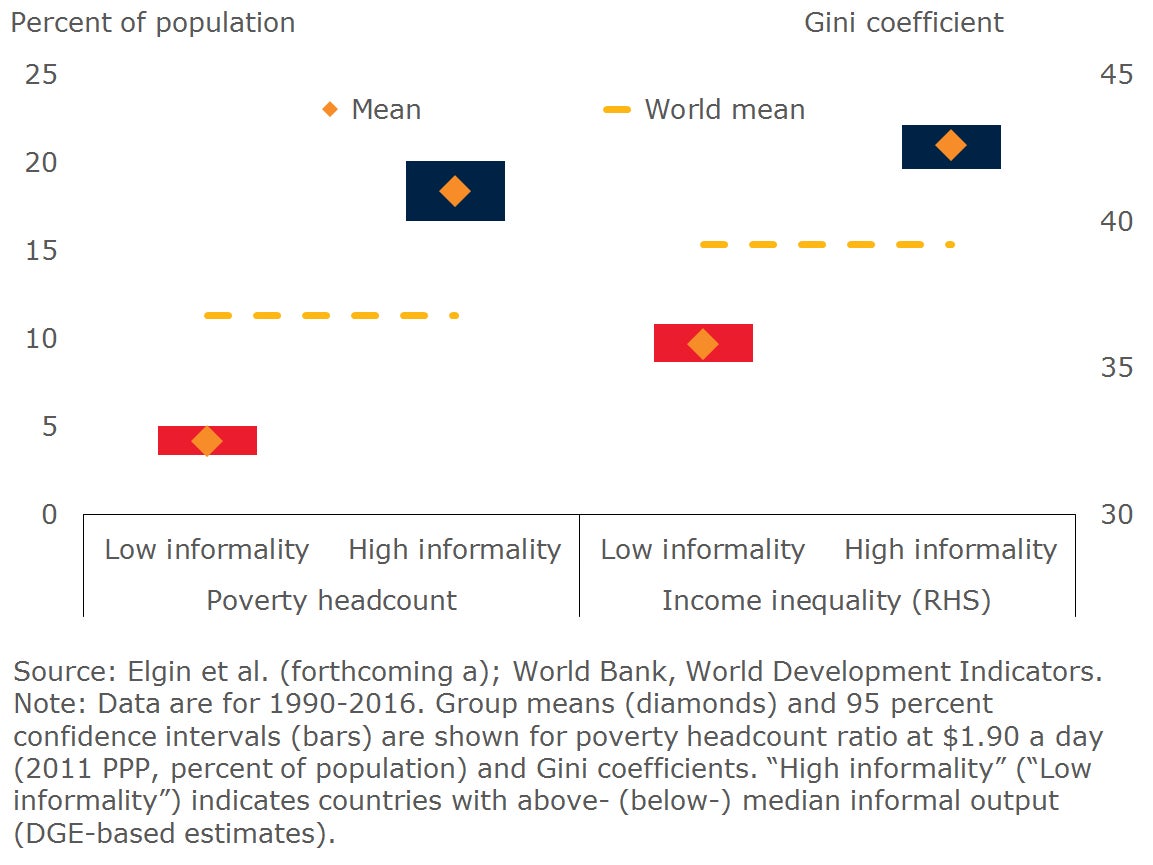 The average informal firm in emerging market and developing economies is only one-quarter as productive as the average firm operating in the formal sector. This is only in part explained by informal firm characteristics such as their younger age, less experience, and smaller size. Moreover, firms in the formal sector that face informal competition are, on average, only three-quarters as productive as those that do not. Better business climates can mitigate some of these productivity differentials. 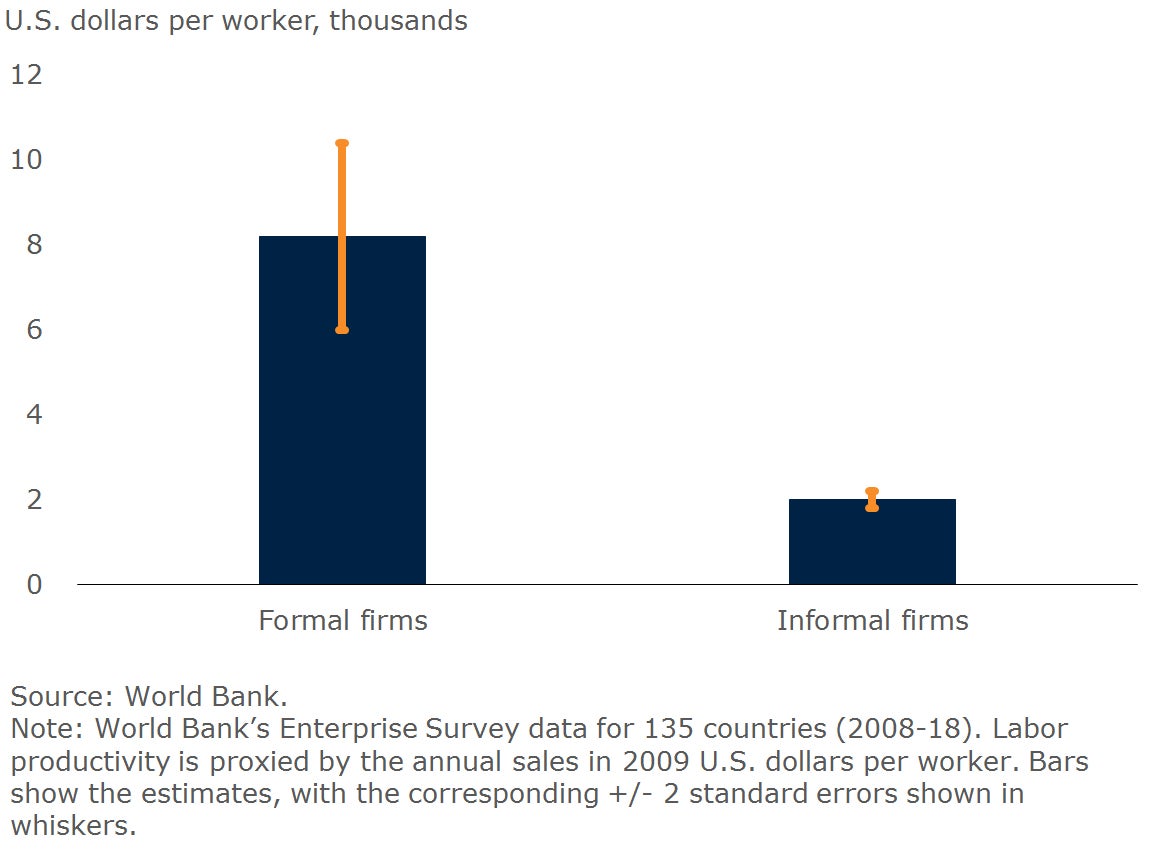 Addressing informality requires well-coordinated policies that take into account country-specific conditions. Policy changes that could affect vulnerable groups can be balanced by stronger safety nets, greater labor and product market flexibility, and better access to resources for informal firms. In addition, policies to spur economic development in general can help reduce informality. Specific measures include streamlining of tax codes and enhanced enforcement of revenue collection; easing firm and labor regulations to create a level playing field for both formal and informal participants; as well as greater access to finance and public services to help increase productivity in the informal sector. Informal sector remains unorganized and unprotected economy. With this sector growing in size , the possibility of a reverse may not be in sight, owing to the increasing poverty levels and unemployment prevalent in many African countries. It is a major source of livelihood for majority of the people.