Energy prices have surged over the past three months, especially natural gas and coal prices, while most non-energy prices have plateaued following steep increases earlier in the year. Adverse weather has buffeted many commodity markets: unusually high summer temperatures increased demand for electricity; droughts reduced hydroelectricity supply and affected some agricultural commodities, while floods impacted the supply of some metals and coal. Most prices are expected to ease in 2022 as supply constraints ease.

Crude oil prices continued their recovery from their COVID-19 lows, with Brent crude oil averaging $82/bbl in the first half of October, well above its pre-pandemic level. Oil prices have been boosted by the continued recovery in oil demand, which is now just 3 percent below its pre-pandemic peak. Production was also slower to pick up than expected, due to supply disruptions and capacity constraints. Oil prices have also been supported by surging natural gas prices as oil is becoming increasingly competitive as a substitute in heating and electricity generation. 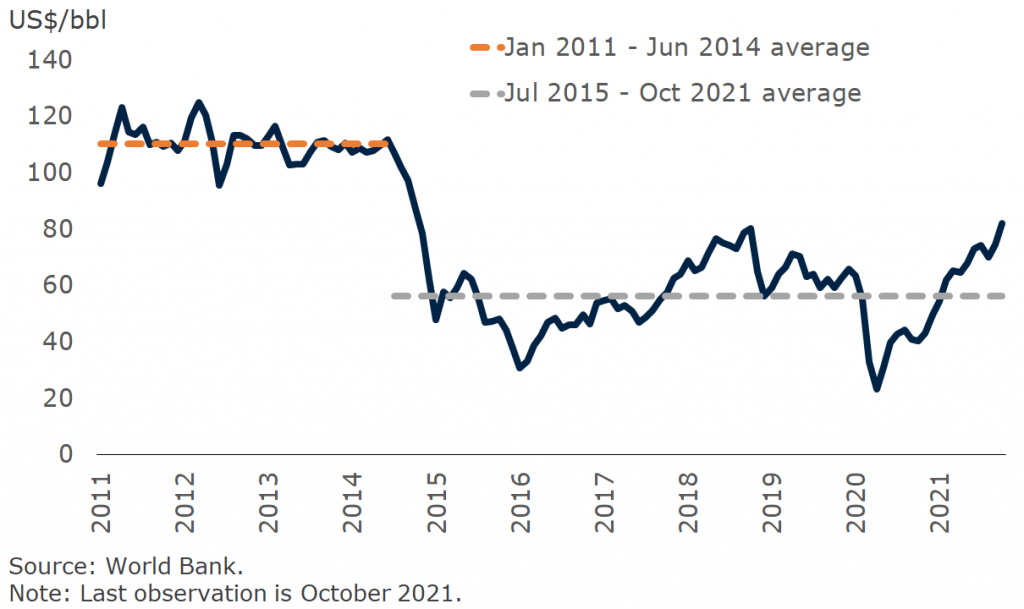 After rising through much of 2021, crude oil production declined in August and September. Production in the United States was disrupted by hurricane Ida. Production cuts by OPEC and its partners (OPEC+) was also well below their targeted output, primarily due to maintenance and unplanned outages in some countries due to COVID-19 restrictions, and partly due to persistently weak investment, with some countries producing at or near capacity.

Natural gas and coal prices have soared in recent months, with spot prices in Europe and Asia reaching record highs driven by rebounding demand and stagnant supply. Demand for electricity has risen in line with the economic recovery, boosted by warmer weather which increased demand for cooling. Electricity production from renewable sources also declined in several countries due to drought and low wind speeds. Adverse weather also impacted production of natural gas and coal, with flooding reducing coal production in several countries including China and Indonesia.

Agricultural commodity prices stabilized during 2021Q3 but remain at their highest level since 2013. Declines in some food prices (e.g., rice in response to good yield in South-East Asia) were offset by higher beverage prices (especially coffee due to frost in Brazil). After several years of below-average growth, grain and oilseed supplies are expected to grow at historical levels in the current, 2021-22, crop season.

The rally in energy prices, especially coal and natural gas, have sharply increased agricultural input costs, including fertilizers which have risen more than 55 percent since January. High energy prices forced some chemical companies to halt or reduce production capacity. Rising input costs along with the emerging La Nina pose significant upside price risks to agriculture while with ambitious biofuel targets may boost some grain and oilseed prices in the longer term.

After reaching an all-time high in July, iron ore prices have since fallen rapidly, driven by China’s reduction in steel production in order to meet zero-growth targets for the year. In contrast, most base metal prices continued to increase, driven by the global economic recovery, while production has been disrupted by energy shortages and lockdowns. Tin prices have reached all-time highs amid strong demand for electronics. Aluminum and zinc prices have also been boosted by high energy prices which saw some metal refiners reduce or close production.

Precious metal prices fell 3 percent in 2021Q3 (q/q) amid a rise in U.S. 10-year Treasury yields, with larger falls for platinum (-13 percent) and silver (-9 percent) compared to gold (-1 percent). Platinum prices have been depressed by disruptions to car production globally, which have reduced demand for catalytic convertors. 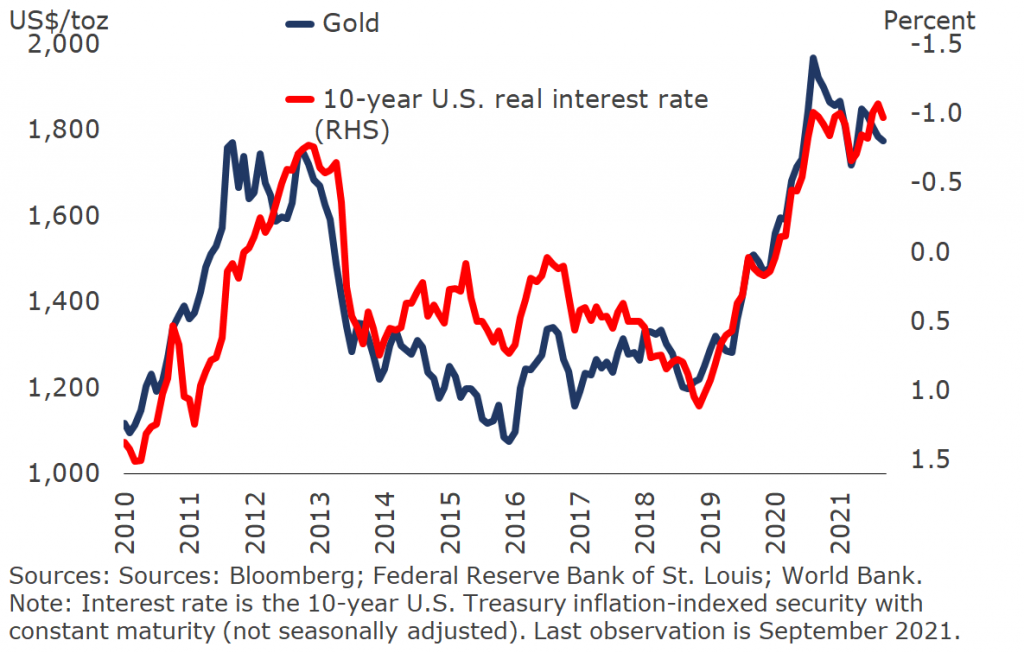