There is a long-standing tradition looking for an indicator able to track human well-being in a given year. For this purpose, GDP per capita has been heavily criticized, notably on two accounts. First, GDP is insensitive to the distribution of consumption across the population. This concern led to the design and adoption of monetary poverty measures. Second, key dimensions of human well-being, such as health, are extremely hard to meaningfully translate into monetary values. One obvious solution is to adopt a dashboard of indicators. Unfortunately, a dashboard is silent as soon as two of its indicators yield opposing comparisons. Another standard practice is to resort to composite measures such as the Human Development Index (HDI) or multidimensional poverty measures. However, these measures are typically not grounded in a defensible notion of human wellbeing. In particular, the weights they attribute to each dimension are not related to the trade-offs that individuals would make. As a result, the added-value of these composite measures over a mere dashboard is unclear.

The PALE index makes progress on the critiques identified above. Indeed, PALE is normatively grounded on expected life-cycle utility, a measure of human well-being proposed by Harsanyi (1953). The main simplification is to consider a binary quality of life: in any period, an individual is either poor or non-poor. Life-cycle utility is then the sum of period utilities over one’s lifetime, where period utility can take two values. We show that PALE is a normalization of the expected life-cycle utility, where

where LE is life-expectancy at birth, H is the fraction of poor and parameter q Î[0,1] is the fraction of period utility lost when poor. When assuming that no period utility is lost (q = 0), PALE corresponds to life-expectancy at birth. At the other extreme, when assuming that spending one year in poverty is equally bad as loosing this year due to mortality (q = 1), PALE corresponds to the poverty-free life-expectancy index (Riumallo et al., 2018). In that case, PALE can be interpreted as the expected number of years that a newborn expects to live free from poverty if she was confronted throughout her lifetime to the mortality and poverty observed during the year. Clearly, the poverty and mortality observed in a period are not good predictors for the future, and PALE should thus not be understood as a forecast. However, the evaluation of wellbeing in a given period should not depend on the future. Rather, PALE is the consistent indicator in order to aggregate the poverty and mortality observed in a given year using a lifecycle perspective approach.

PALE depends on a weight parameter, but we show that its comparisons can be robust to the choice of a value for q Î[0,1], even for some cases for which LE an H yield opposing comparisons. We provide the intuition using an example illustrated in Table 1. In 2019, Bangladesh has more (extreme) poverty but less mortality than Pakistan. Unsurprisingly, a newborn would “expect” to spend more years in poverty in Bangladesh than in Pakistan. However, the smaller mortality in Bangladesh more than compensates for its larger poverty. Indeed, a newborn would also “expect” to spend more years out of poverty in Bangladesh than in Pakistan. Hence, regardless of the respective weights given to years in poverty and years out of poverty, the newborn “expects” a larger life-cycle utility in Bangladesh. The only assumption needed is that being poor is not worse than being dead.

We construct a dataset with internationally comparable mortality and extreme poverty data over the period 1990-2019 and quantify how often LE and H yield opposing comparisons and how often PALE can solve these ambiguous cases. For instance, when comparing all possible pair of countries in each year, across all years, there are 23 percent of such comparisons for which mortality and poverty move in opposite directions. Out of these ambiguous cases, PALE is able to solve 37 percent of them. We also investigate the evolution of each country in the dataset, by comparing the situation in a particular year to that prevailing five years earlier. We find that, out of 27 percent of conflicting comparisons, PALE is able to solve 38 percent of them. 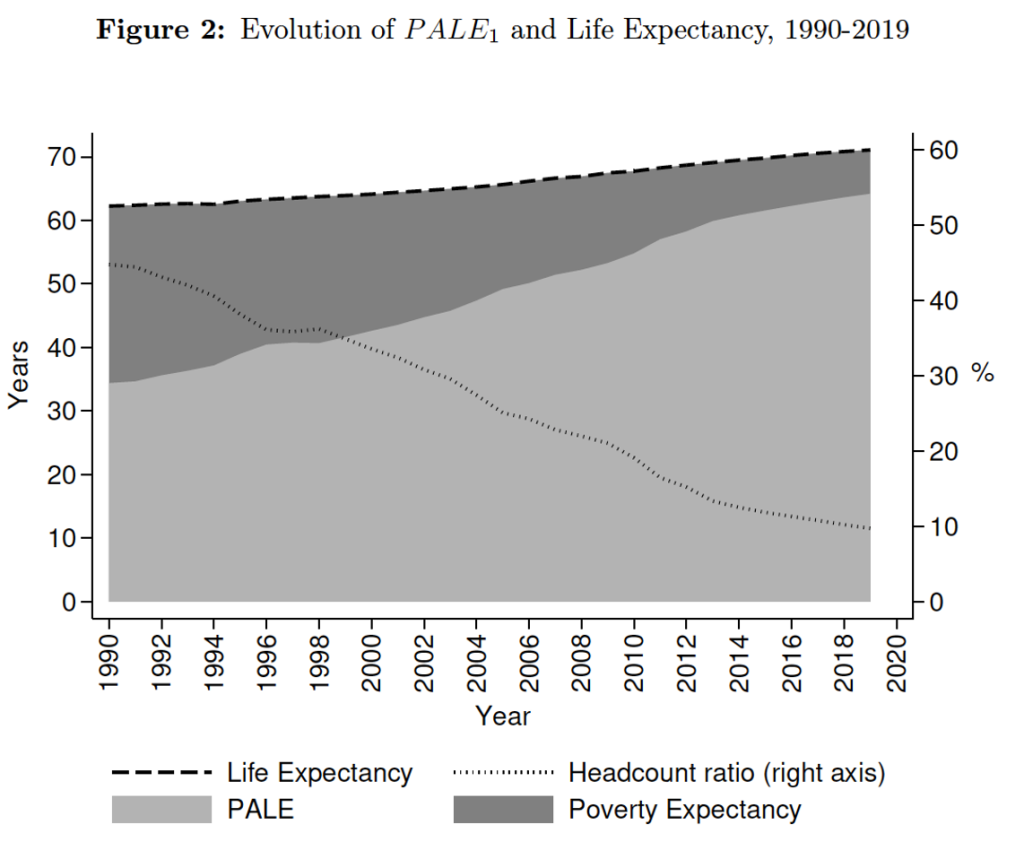 Another interesting aspect of PALE is that this index can be computed using readily available data on life expectancy and the fraction of poor. The reason for this particularity has to do with the particular nature of the mortality dimension: one cannot be dead and simultaneously suffer from another deprivation. The fact that poverty and mortality are mutually exclusive greatly simplify their aggregation.

We also show how PALE generalizes when one is concerned with the distribution of unequal lifespans. In that case, the generalized index depends on a second normative parameter: the age threshold below which death is considered as premature. We show that this new index of multidimensional poverty enjoys the same advantages as PALE.