Increasingly, inequality within, not across, countries is rising 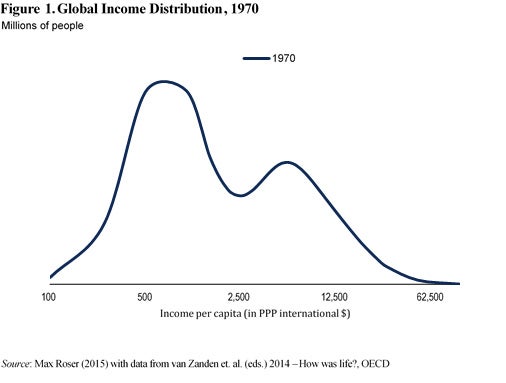 During the second-half of the last century countries were placed in one of two mutually exclusive camps: north or south, east or west, advanced or emerging, developed or developing. Simple though this categorization of countries had been, it reflected prevailing realities. In 1970, for instance, the global distribution of per capita income showed a clear divide between richer and poorer countries (See Figures 1 and 2). These between-country differences were equally applicable to other development conditions, notably health and education. However, as Hans Rosling emphasized during his last presentation at the World Bank, for the 21st century this binary distinction between countries is outdated. Boundaries between developed and developing regions are less clear today because of the extraordinary social and economic progress achieved in the large majority countries. Global economic activity is less geographically concentrated and increasingly dispersed across production networks that connect metropolitan areas around the world. 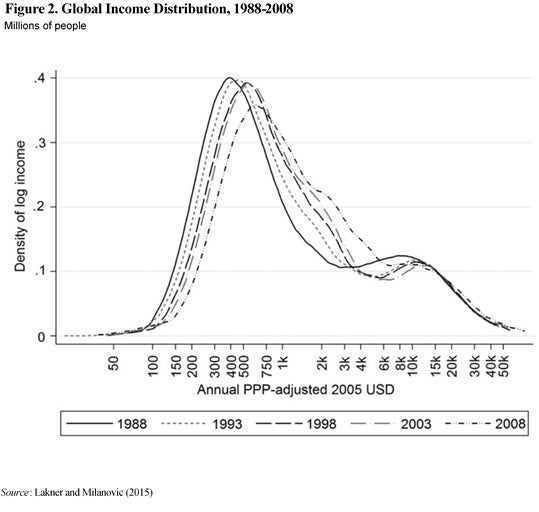 ​Yet, although discrepancies between countries have narrowed, emerging evidence suggests that inequality within countries is rising. Atkinson, Piketty and Saez (2011), for instance, show a marked concentration of wealth on the top tail of the income distribution, particularly in the United States, other English speaking countries, India, and China, while Lakner and Milanovic (2013) report a long-term and continuously increase in the within-country component of global inequality. And if the benefits of economic growth are unevenly distributed within countries, upcoming technological changes and urbanization are likely to intensify these divisions further.

As a result, the emerging face of income inequality for the 21st century is one of coexisting discrepancies at the local level. For India, Jean Dreze and Amartya Sen’s (2011) essay describes the drastically uneven development progress achieved across its states, while Gangopadhyay et. al. (2010) document India´s pockets of poverty at the narrower district level.

Inequality at the local level is not limited to income. It extends to other aspects of human wellbeing and exists in all countries. Homeless people living by the side of modern highways are common sights in metropolises from Tokyo to Mumbai to Sao Paolo. Life expectancy in the poorest neighborhoods of Baltimore is below 69 years, the same as in in Iraq. Similar examples of coexisting unequal development outcomes are evident in Nogales, Arizona and Nogales, Sonora, spotlighted in Acemoglu and Robinson (2013) as an example of drastically unequal economic development.

The new face of inequality requires active and comprehensive combination of social and growth enhancing policies that target the bottom quintiles of the income distribution more than ever. Governments must not sit back and rely on economic growth alone to transform the living conditions of the underprivileged. In Dreze and Sen’s words, policymakers must look for comprehensiveness in social policy, in particular. Successful conditional cash transfer programs, for example, must be accompanied by other well-targeted social programs and universalistic policies that ensure local provision of good-quality essential services and other public goods (roads, electricity, drinking wager, public transport). Building an infrastructure for collecting data is another important part of understanding and addressing local inequality. Efforts to promote open use of data that is extensive, detailed, and periodically updated are an important part of this job. The article highlights the importance of public goods. In India, extensive privatisation of education and health services has increased inequality. Universal provision of public provision of education and health is a must if inequality has to be reduced. India began with that intention- In 1966, Kothari Commission recommended 'neighbourhood schools ' where all children would attend. Had that been implemented, we would have gone far ahead. Eight years of basic primary education should be provided for all children by public provision only. It is privatisation that has created an elitist class where children of well to do parents go to costly private schools.

Excellent piece, I had hoped there would be a couple more paragraphs relating the "new face of inequality to the SDGs and especially to SDG 16 "peaceful societies"". I think that the new face of inequality "not only requires active and comprehensive combination of social and growth enhancing policies", but the countries in conflict and post conflict should be looked at through a different lens or with a different starting point. Their elites are even further away from the majority, and most elites live outside. For these countries to establish security and justice is absolutely key before social and economic policies can come into play. We saw how fragile countries got very little out of the MDGs; the New Deal for Fragile states has a few achievements as a framework (Somalia, Timor Leste), but did not really catch on with the senior policy makers in fragile countries. There is such a need now to focus on how the SDGs (especially goal 16) can promote peace and security and reduce violence. And what is our role?