When the story broke in 2007 that a woman’s husband had cut her arm off in a domestic dispute, Dr. Maria das Neves Ceita Baptista de Sousa, the country’s first woman Prime Minister (2002–04) and member of the Parliamentary Commission for Human Rights, Gender, and Citizenship spearheaded efforts to enact laws that would eventually codify domestic violence into Santomean legislation and provide some form of protection for women.

Recently published Women, Business and the Law (WBL) brief “Legal Reforms to Protect Women at Home and at Work in São Tomé and Príncipe,” investigates how reform efforts resulted in the introduction of two pieces of landmark legislation to counter domestic and family violence. Seeking to understand the pressing issues women face on the small island, the brief includes interviews with several key stakeholders across different sectors, including policymakers, government representatives, civil society, and grassroots organizations. Each conversation shed light on the hurdles faced by Santomean women throughout history and even today. Ultimately, women’s safety at home and work stood out as some of the most pressing challenges faced by local women .

The reform process gained momentum in 2007 after the story shocked the country. While Dr. das Neves spurred the debate about the pervasiveness of gender-based violence (GBV), drafting and approving these laws was not straightforward. Several stakeholders got involved: two female lawyers drafted the original text, the United Nations Development Programme (UNDP) provided support, and Dr. das Neves mobilized her fellow Parliamentarians to take a stance against domestic violence and vote in favor of the law. Finally, when the bill went up for a vote in the National Assembly, it was approved with 48 votes out of 55 and only two abstentions.

The reform efforts were only possible due to a combination of three factors (see Figure 1). Firstly, women in São Tomé and Príncipe have been highly active in the country’s public life, particularly in the political sphere. This transgenerational advocacy movement enabled them to articulate demands with different stakeholders  over the years, including the government and Parliament, to make their voices heard and get meaningful reforms approved. Second, strategic partnerships between the government, civil society organizations, and international organizations provided the technical and logistical tools to draft and enact legislation in line with internationally recognized standards. And lastly, awareness-raising campaigns played a crucial role in alerting both the population and decision-makers on the pressing need for change to protect women at home and work.

Women’s safety still stands out as one of the most pressing challenges faced by Santomean women. Over the past few years, the number of domestic violence cases reported to the police has continued to rise . While this trend is alarming, the increase in reported cases indicates that more women have reported such cases as legal protection and recourse have become available (see Figure 2). Additional challenges remain as women still participate at lower rates in the labor force – 37 percent in 2021, virtually the same as in 2003. Representation in politics and decision-making positions also remains low, with women holding about 24 percent of seats in the National Assembly as of 2020. 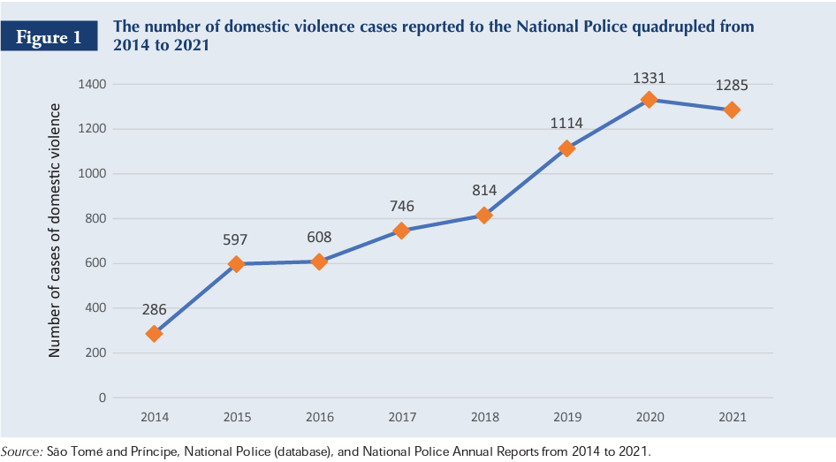 While much progress has been made, the path toward gender equality is still a bumpy road for most women, not only in São Tomé and Príncipe but around the world . Successful reform stories may encourage other countries to take an important first step in assessing their legal frameworks, identifying gaps, and working with key stakeholders to impact women’s lives.

While we take stock of São Tomé and Príncipe’s achievements over the past 52 years, we must also consider the work ahead to strategically design future legal reforms. Women, Business and the Law is committed to supporting future reforms toward gender equality through its brief series. Visit http://wbl.worldbank.org to read more stories.